“Berries over Bugs” was the headline of a July 24th press release from The Center for Science in the Public Interest (CSPI, a.k.a., the food police). Being a Berry, of course I fully endorse “choosing berries over bugs” any day!

But seriously, CSPI issued this press release a week after the closing of the 2013 Institute of Food Technologists (IFT) Annual Meeting + Food Expo, where a whopping 97 ingredient suppliers were listed in the directory under the “Colors, Natural” category. But as we all know, not all natural colors are equal.

(In case you missed my review of innovative ingredient technologies for dairy product formulators, which includes a section on the fact that “natural colors were the buzz” at IFT, you can view it HERE.

(If you need a refresher course on food color additive regulations in the States, scroll to the bottom of this blog for “Food Colors 101.”)

In general, artificial colorings are manufactured from petroleum-based raw materials. Colors exempt from certification, commonly referred to as natural colors, are obtained from a variety of sources, including plants, minerals, insects and fermentation, resources considered by many to be natural.

It is this generalization that has some color suppliers creating a point of differentiation by touting the fact that their natural colors are derived solely from food, and most often, directly from fruits and vegetables. This is because carmine--a dye extracted from the dried, pulverized bodies of cochineal insects—is an exempt-from-certification color and continues to be controversial in terms of its naturalness.

CSPI’s Latest Beef with Carmine
CSPI’s recent press release is urging global yogurt giant Dannon to choose berries over bugs, that is, in terms of a colorant for a number of its yogurt products. Dannon uses carmine to give several varieties of fruit-flavored yogurt their pink color. The nonprofit food watchdog group says that Dannon’s practice cheats consumers who might expect that the named fruits—and not the unnamed creepy crawlies—are providing the color. Carmine also puts some consumers at risk of serious allergic reactions if they don’t read the ingredient statement carefully. 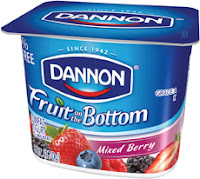 Strawberry, Cherry, Boysenberry and Raspberry varieties of Dannon’s “Fruit on the Bottom” line all contain carmine, as does the Strawberry flavor of Dannon’s Oikos brand of Greek yogurt. Two flavors of Dannon’s Light and Fit Greek use the extract, as do six of its Activia yogurts.

With all due respect to my fellow food scientists at Dannon, I am sure use of carmine is under careful consideration. After all, Dannon does use only natural colorings, such as purple carrot juice, in its Danimals line of yogurts marketed to children.

The food police are relentless. The chief of police, Michael Jacobson, CSPI executive director, said in the press release, “I have nothing against people who eat insects, but when I buy strawberry yogurt I’m expecting yogurt and strawberries, and not red dye made from bugs.”

CSPI is sponsoring an online petition urging Franck Riboud, CEO of Dannon’s parent company Groupe Danone, to replace carmine with more of the fruit advertised on the label. The petition can be viewed HERE.

CSPI originally took interest in carmine a number of years ago because of the fact that some consumers experience serious allergic reactions when they consume this exempt-from-certification colorant. In response to a CSPI petition on this issue, the FDA now requires carmine to be listed on food labels when it is used. Read more HERE.
Read FDA’s final rule HERE.

Previously companies could obscure the presence of the insect extract by labeling it “artificial color.” CSPI had urged FDA to go further and describe carmine as “insect-derived,” making it easier for vegetarians, those who keep kosher, or anyone otherwise averse to eating such ingredients to avoid it.

The food police are reading the fine print, so are many consumers. With at least 97 ingredient suppliers marketing natural colors, consider choosing berries over bugs whenever possible.

Here are two new products that rely only on colors derived from fruits and vegetables.

New Kemps Greek Yogurt comes in four varieties--Black Cherry, Raspberry, Strawberry and Vanilla—and is sold in 5.3-ounce cups. The ingredient statement of the Black Cherry and Strawberry varieties indicates that vegetable juice concentrate is used for color. The Raspberry variety gets enough color from the use of high-quality raspberries and raspberry puree.