For the Love of Dairy: Five States in 36 Hours 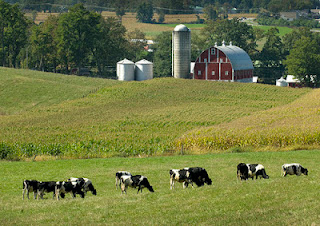 Via planes, train and automobile, I managed to set foot in five states during a span of 36 hours this past Sunday to Monday. Much of my time was spent driving through rural Pennsylvania to get to and from the Northeast Dairy Convention and speak on the topic of “What’s Hot and What’s Not” in new dairy product introductions.

There was a hand-painted barn telling me: Drink Pennsylvania Milk. I obliged and ordered a freshly prepared latte at a Sheetz c-store.

I even saw a few billboards promoting general dairy consumption. So I dug in my bag and pulled out the snacking cheese I saved while in the United Club.

As I belted out the verses to Rod Stewart’s Forever Young, I smiled. That drive, once again, confirmed how blessed I am to be part of the dairy industry.

It truly was an honor to speak to a room packed with Northeastern dairymen (and dairy women). I could see the passion on their faces. They lit up when I talked about how dairy’s already very positive image continues to grow stronger. They were encouraged by my words of unlimited opportunity for growth through innovative product development.

I spoke with some recruiters at the convention who specialize in placing dairy professionals in the booming Northeast dairy region. (Interested? Visit HERE.) They, too, are amazed by the growth in dairy, which is being driven largely by yogurt.

And speaking of yogurt, I just completed an article for Food Business News on the yogurt category. I invite you to link HERE and enjoy the read. Hopefully it will inspire and reaffirm why you are in this industry.

Missed my presentation in Pennsylvania? Try to come and hear me speak on this topic at the Oregon Dairy Industries annual conference on April 9 and 10. For more information, visit HERE.
Posted by Donna Berry at 3:56 PM No comments: 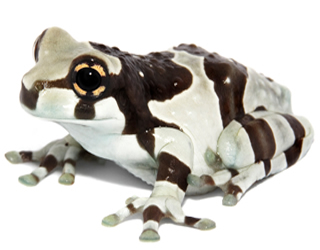 We live in such a virtual world that it is often easy to forget that food product development is a hands-on effort. (At least for now it is.)

My eldest son, after finally getting back in the classroom after the seven days of Chicago public school teachers striking, informed me that his biology teacher announced that they will not be dissecting real frogs this year. There’s no money to purchase the frogs. Rather, she has an interactive computer program that allows each student to virtually dissect the four-legged leaper.

I find this bothersome. As much as I was disgusted with this biology lesson back in the day, I also know that it was a major driver of directing me towards food science. I loved the hands-on part of the process.

And as much as food science is about getting your hands dirty, real-world product development includes other disciplines such packaging and processing, safety and regulatory, and marketing and distribution. The Dairy Research Institute gives college students the chance to get a taste of real-world dairy foods product development, empowering them to experience all of these critical aspects of bringing a new product to market.

The Dairy Research Institute, established under the leadership of America’s dairy farmers, will be conducting its second annual New Product Competition. Open to undergraduate and graduate students in the United States and Canada, this year’s competition challenges student teams to develop a new dairy product for the morning meal occasion, which includes any meal eaten before breakfast, for breakfast, as a morning meal replacement or morning snack.

According to recent consumer research on morning eating habits conducted by the Innovation Center for U.S. Dairy, nearly four out of five consumers over the age of 2 eat or drink something during a typical morning. This represents more than 100 billion food or beverage occasions and an estimated $200 billion in sales. Still, approximately 42 million people do not eat or drink anything in the morning, presenting a sizable opportunity.

A judging panel including experts from across the dairy industry will evaluate entries and select three winning teams to be recognized at the annual American Dairy Science Association (ADSA) Joint Annual Meeting in Indianapolis, July 8 to 12, 2013. In addition, the three winning concepts will be showcased at the U.S. Dairy Export Council booth at the Institute of Food Technologists annual meeting in Chicago, July 13 to 16, 2013. The winning teams will receive a combined $16,000 in cash prizes, including $8,000 for first place, $5,000 for second place and $3,000 for third place. Full contest details are available at HERE.

In its inaugural year, the Dairy Research Institute New Product Competition tasked students with developing an innovative dairy beverage that leveraged Innovation Center consumer research on milk’s competitive beverage set. The winning teams were announced earlier this year and included an oat-infused vanilla milk, an on-the-go mango drinkable Greek yogurt and a caffeine-enhanced drinkable yogurt. You can read about the winners HERE.

“I think dairy is the best model to use to teach students product development because there are so many different options and functional aspects to consider, from nutrition levels to shelf life preservation,” McGregor says. “It’s an ideal teaching category for real experience.”

The deadline for contest submissions is Jan. 15, 2013. To learn more about the Dairy Research Institute New Product Competition, including eligibility guidelines and judging criteria, visit HERE.

Posted by Donna Berry at 5:09 AM No comments: 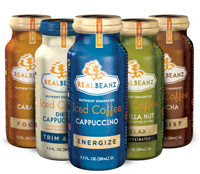 I am a big tea drinker—mostly sun brewed and over ice. This week I have been sipping soothing hot cups of Tazo’s Calm blend in efforts to reduce the stress of melding family with work due to the Chicago teacher’s strike. (I have a son who has been home all week because of the strike.)

There’s an emerging trend among food formulators to incorporate flavorful ingredients that have well established effects on health and wellness. These ingredients are known as botanicals and are often described as “plant extracts with functional benefits.”

I encourage you to read about this category of ingredients in an article I recently wrote for Food Business News. It can be found HERE.

There are many opportunities in dairy for botanicals. The Food Business News article provides a number of examples, such as RealBeanz Energize (pictured), which is cappuccino with ginseng and vitamin B12.

And stay tuned…I will profile a brand new product this Monday in the Daily Dose of Dairy. Make sure you are subscribed to receive it.

Have a great weekend. And please, Chicago teachers, agree on a contract and let’s get my son back in the classroom.
﻿
Posted by Donna Berry at 6:23 AM No comments:

Milk…and Its Fat…Does a Body Good

Last week’s blog on school milk generated numerous emails and LinkedIn comments, in particular from dietitians concerned that growing children are not getting their daily dose of essential fatty acids when fat-free milk, vs. low-fat or whole milk, is served. A connection in Sweden wrote, “We turn more and more to 3%-fat milk in schools. Flavored milk has never been served and no milk with sugar. If the kids get no fat they crave more carbs and eat more sugar. The modern view is that it is not the fat that makes kids fat; it is the sugar.”

A local connection wrote, “Research going back 30 to 40 years shows that the fat in milk is required to be able to absorb calcium…From the 1950s to the 1980s we believed in the U.S. that fat was required for weight loss. All weight-loss products had unsaturated fatty acids in them, such as safflower or sunflower oil or lecithin. People lost a lot more weight with these products than the new low-fat or no-fat products/diets…The milk given to children should have the same fat content as breast milk…When I was in grade school we were given a half-pint of milk and an apple almost every day. It was whole milk, we did not have 2% and very few people drank skim milk. The fattest child in my class would be considered normal size by today’s standards.”

Then an article by Jennifer Sygo, a registered dietitian at Cleveland Clinic Canada in Toronto, appeared in Monday’s National Post posing the question: What if milk fat isn’t so bad for you after all?

She explains that a growing body of research is challenging the notion that the fat in dairy products does a body bad, especially when it comes to our hearts. There are a number of theories as to why there’s this change of heart, so to say.

Though the hypotheses require more research, they are definitely intriguing and many make common sense. One belief is that the benefits relate to the calcium content of dairy products, while others have noted that the fat in milk products causes levels of high-density lipoprotein (HDL, or “good”) cholesterol in the bloodstream to rise. There are others.

Regardless, this new way of looking at dairy products follows the growing trend toward eating foods in their whole, unprocessed form, not to mention our growing appreciation that whole food is greater, and more complex, than the sum of its parts, according to Sygo.
You can read her article in its entirety HERE.

Finally, timing is everything. On Wednesday, I received a press release from Florida Dairy Farmers stating: A lot of Floridians like their milk whole.

Grocery store sales in the sunshine state show that 30.6% of the milk sold through April 15 of this year was whole milk, while nearly the same amount--29.5%--was 2%. More than 18% of the milk sold was 1% and nearly 21% was fat-free, according to data from SymphonyIRI.

The press release explains that according to a new study published in the European Journal of Nutrition, there appears to be no relationship between full-fat dairy products and weight gain when consumed as part of a healthy diet. Further, researchers also found nothing to link higher fat products with poorer metabolic health or increased risk of diabetes.

According to Florida Dairy Farmers Registered Dietitian Alyssa Greenstein, “Penny for penny, dairy delivers one of the best nutritional values of any food group. And for only about 25 cents per 8-ounce glass, milk remains one of the best ways to ensure your family’s diet is nutritious and balanced during these hard economic times.”

Yet, overall, milk sales continue to decline. There are several reasons why declining milk sales is concerning, given that a glass of milk may be the ultimate weapon in the fight against osteoporosis, according to new research released in Australia. The study, conducted by the University of South Australia, found that increasing dairy intake to the daily recommended serving could have saved Australia’s national health-care system $112 million annually, while sparing 40,000 men and women from the degenerative bone disease.

The good news is that regardless of preference for fat levels in milk, dairy lovers can continue to enjoy their favorites as part of a well-balanced diet. Milk marketers need to continue to communicate that milk, and the essential fatty acids that it naturally contains, does a body great.

Did I mention that whole milk is delicious? All this communication convinced me to buy a quart the other day. When my stomach started rumbling in the middle of the afternoon, I poured myself a cold glass. Not only did it refresh, it satisfied. And it was super delicious. (When I compared the Nutrition Facts to other common snacks, the glass of whole milk was lower in fat and contained more vitamins, minerals and protein…go figure!)

Maybe if we kept the fat in school milk, and served the white stuff nice and cold, there would be no need to flavor and sweeten it. It’s a back to basics approach.

I welcome your comments.﻿
Posted by Donna Berry at 3:54 PM No comments: