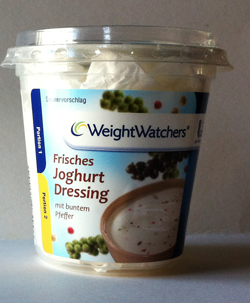 Summer time is salad season. All that produce grows in abundance…fresh and local. I’ve always believed that U.S. dairies are missing out on the salad dressing business. In Europe, consumers either make their own dressing—a little vinegar and oil—or buy refrigerated dressings, typically based on yogurt and sold in the dairy case, much like the product pictured.

This particular product purchased in Germany uses the licensed Weight Watchers brand. The 150-milliliter cup contains two portions, with blue and yellow marks on the left side of the label designating where the portion begins and ends. Based on fat-free yogurt, a single portion of the dressing delivers only 40 calories. (For more information, visit www.weightwatchers-im-supermarkt.de.)

Cup yogurt manufacturers in the States might want to explore savory flavors in a pourable formula. Those processors in the drinkable yogurt category can use the same bottle. (The Weight Watchers brand is also found on such dressings in Europe.) And, if you are in the recloseable plastic bottle of milk business, especially buttermilk, why not add buttermilk ranch to your line? There’s something very fresh and natural about purchasing buttermilk ranch dressing from the dairy case.

Another idea to ponder this holiday weekend: savory yogurt for dipping. I am not talking about the hearty dips based on yogurt sold in the dip case, rather, yogurt with savory seasonings, maybe a little dill, ranch or simply seasoned salt. The idea being simple, and a thinner viscosity than one would expect from a product merchandised in the dip case.

In case you missed my BLOG last week about how Greek yogurt is being used in foodservice, you can scroll down and read it. Maybe we can bring this foodservice concept to retail, but simplified, with products that are ready to use. I plan on purchasing some plain yogurt this weekend and experimenting in my kitchen. Maybe your product development lab will want to do the same in the near future.

By the way, the Daily Dose of Dairy is taking Monday off to watch baseball, barbecue and dip into homemade savory yogurts.

Have a beautiful, safe and dairy-full Memorial Day Holiday!
Posted by Donna Berry at 7:17 AM No comments:

Is Your Yogurt in Foodservice? Your New Competition Is Coming in Strong! 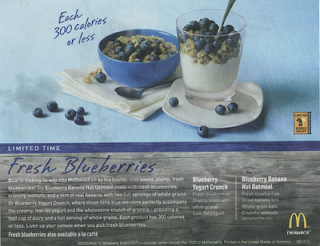 Before everything NATO began invading my hometown Chicago, the Windy City hosted the National Restaurant Association (NRA 2012) Show, which this year had a number of exhibitors showcasing innovative new yogurt products.

First and foremost, it should be no surprise that Greek yogurt is invading the nation’s menus. In fact, The American Culinary Federation, St. Augustine, FL, distributed reprints of its May 2012 “Ingredient of the Month” feature article, which, you guessed it, focused on Greek yogurt. The handout explains that Greek yogurt can be used in everything from savory sauces to sweet baked goods, and includes recipes, as well as suggestions on how to substitute Greek yogurt for sour cream, cream cheese and butter in various recipes.

Kronos Foods Inc., Glendale Heights, IL, a leading manufacturer of premium gyros and other Mediterranean and specialty foods, used NRA to announce that it has received USDA-certification as a dairy facility and will begin producing Greek yogurt specifically for the foodservice industry. Offered in two-packs of 64-ounce containers, the product allows foodservice operators to easily create Greek yogurt menu items or utilize it as a recipe ingredient. (The company is also rolling out a line of Greek yogurt dips, which will be showcased this coming week as a Daily Dose of Dairy.)

Howard Eirinberg, president of Kronos Foods, explains why the company decided to get into the Greek yogurt foodservice business: “While market data shows that consumers are quickly embracing Greek yogurt as a healthy alternative option in their homes, the biggest opportunity for Kronos is in the foodservice industry. Greek yogurt is a much healthier alternative to mayo and sour cream in sandwich spreads, salad dressings, dips, side dishes and desserts without compromising the recipe’s flavor. By using Greek yogurt, chefs and foodservice providers can meet consumer demand for taste and lower fat items for breakfast, lunch, dinner and dessert.”

There are a lot of Greeks in Chicago, which is why the Windy City is home to another purveyor of authentic Greek and specialty Mediterranean foods: Grecian Delight, Elk Grove Village, IL. The company, too, now offers Greek yogurt to its foodservice customers.

Grecian Delight’s Chef Michael Zeller suggests replacing sour cream with Greek yogurt. Add a little dill and lemon to create a delightful topping for salmon. Add ranch mix to Greek yogurt and top a baked potato. Great for all dayparts, Zeller says Greek yogurt makes an excellent breakfast parfait when combined with granola and berries. Blend it with honey and maraschino cherry juice to make a delightful fruit dip resulting in a healthy dessert option. Or, use it as a savory sandwich sauce by mixing in basil.

(And if you missed Wednesday’s Daily Dose of Dairy on 16 Handles, a New York City self-serve frozen yogurt company that has added a soft-serve version of Greek yogurt—My Greek Honey—to its product lineup, you can view the details HERE.)

Speaking of menu items, another local focal—McDonald’s, Oak Brook, IL—is offering fresh blueberries to its customers. The blueberries can be purchased alone, or as a topping on yogurt or oatmeal.

The new Blueberry Yogurt Crunch is creamy, low-fat yogurt topped with fresh blueberries and crunchy granola. The company touts that each parfait, which contains less than 300 calories, provides a half cup of dairy and a full serving of whole grains.

I sure hope the NATO visitors get a chance to stop by a local McDonald’s or Greek town!
Posted by Donna Berry at 5:24 AM No comments:

The message was loud and clear at the IDFA 2012 Milk and Cultured Products Symposium in Kansas City: The industry needs to better position dairy products for specific day parts and this can be accomplished through innovative product development and savvy marketing. 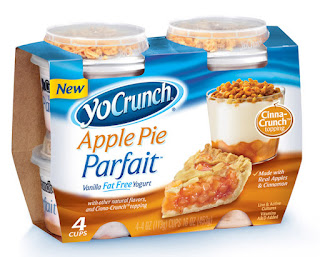 If you missed the meeting, here are some important highlights on this topic:
Posted by Donna Berry at 4:00 AM No comments: