Back to School with Monk Fruit Juice-Sweetened Chocolate Milk 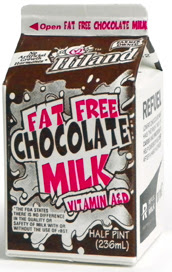 This week and next is back-to-school for most U.S. children. And students in the Kansas City, Mo., and Omaha, Neb., regions will be the first in the country to be served a new concept in lower-sugar, fat-free chocolate milk thanks to innovation efforts by Hiland Dairy, Springfield, Mo.

Flavored milk in schools
Flavored milk is an essential part of the National School Lunch Program, but parents and school administrators continue to have concerns about the amount of added sugar. Studies show that among elementary school children, milk consumption decreases 35% once flavored milk is removed as an option.

U.S. milk processors are challenged with lowering sugar and maintaining taste in school milk, as federal regulations require that flavored milk sold through the National School Lunch Program (for reimbursement purposes, not ala carte) can only be sweetened with nutritive sweeteners. This challenge just got easier thanks to recent advancements in monk fruit processing, which have resulted in a new nutritive sweetener known as monk fruit juice.

Monk fruit juice is a very low-calorie, nutritive sweetener that meets FDA’s standard of identity for sweetening flavored milk for the National School Lunch Program. It is sweeter than sugar, so less is required to deliver a kid-pleasing flavor profile.

Juice vs. extract
Monk fruit, also known as luo han guo (Siraitia grosvenorii), is a small, vine-grown, subtropical fruit that gets its intense sweetness from naturally occurring antioxidants called mogrosides, which are up to 300 times sweeter than sugar. Monk fruit has been consumed for generations in Asia and around the world.

FDA recognized monk fruit as GRAS (Generally Recognized as Safe) for use in foods and beverages in January 2010. Currently, two ingredient forms of monk fruit are available to formulators – powdered monk fruit extract and monk fruit juice. Both products are made by crushing the fruit then infusing the crushed fruit with hot water to release its natural sweet juice. The sweet infusion is then filtered to clarify and stabilize the monk fruit juice. The end-result is a natural fruit juice, which thanks to the sweet mogrosides, is 15 times sweeter than apple juice. The monk fruit extract has a further step to separate the sweet mogrosides from the natural fruit sugars. This product is then dried and sold in powdered form.

Both monk fruit extract and monk fruit juice appeal to consumers because the natural sweetness comes from fruit. One of monk fruit’s best endorsements comes from Dr. Oz.


Back-to-school milk
During the 2011-2012 school year, Hiland Dairy worked closely with Omaha Public Schools foodservice officials to evaluate its new monk fruit juice-sweetened fat-free chocolate milk. The new product contains just 3 grams of added sugar, for a total of 14 grams of sugar and 100 calories per 8-fluid-ounce serving. This is a noteworthy reduction in added sugar (73%) compared to its full-sugar sweetened version, which has 22 grams of sugar and 130 calories per serving. With a thumbs up from school administrators and parents, as well the very discerning consumer—the students—the new milk was completely phased into the Omaha Public Schools system in March 2013. 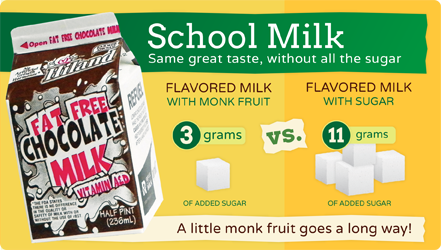 According to Tammy Yarmon, director-nutrition services, Omaha Public Schools, “We piloted the milk on one route without making anyone aware of the change, as we wanted to see if anyone would notice a difference. Once we saw there wasn’t any reaction by our customers, we implemented the change district-wide and announced it on our menus.

“The new, lower-sugar formulation costs a little more, but is well worth it,” she says. “We are hoping for more flavors soon.”

The new chocolate milk is the only flavored milk Hiland Dairy is offering as part of the National Lunch Program for the 2013-2014 school year. All school customers have embraced the product.

Competitive Foods in Schools: Let's Keep Dairy in the Mix

Sweeteners in Flavored Milk: The Comment Period Has Ended. Now What?


Other recent innovations from Hiland Dairy

Early this week, the company rolled out a line of nonfat Greek yogurts that have twice the protein of the mainstream product. Flavors are: Black Cherry, Blueberry, Peach, Pineapple, Strawberry, Raspberry and Vanilla.

Also in May, the company rolled out a line of 100% Lactose Free Milks. The five varieties are:  Vitamin D Whole, 2% Reduced Fat, Vanilla Almond Fat Free, Fat Free and Fat Free Extra. The latter has the rich, creamy taste of 2% without the saturated fat. All are available in half-gallon gabletop cartons with a convenient twist-cap pour spout.