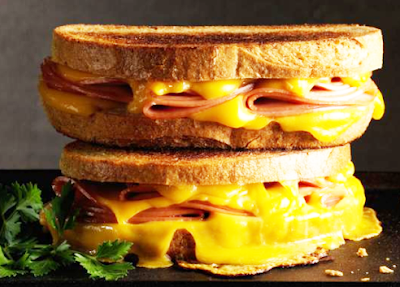 Welcome to a week of everything cheese. It all started yesterday (April 12), which was National Grilled Cheese Day and will continue this upcoming week in Milwaukee at the International Cheese Tech Expo. (For more information on the expo, link HERE. Hope to see you there.)


To commemorate National Grilled Cheese Day, Sarasota, Fla.-based deli meat and cheese specialist Boar’s Head commissioned an online survey (n=1,001 U.S. adults) to find out how much Americans really love cheese. Findings showed that nearly nine out of 10 (87%) Americans would give up coffee, chocolate or alcohol before giving up cheese. Americans don’t just love cheese, they know it as well, with 60% of respondents able to name more than five cheese varieties.

(After these results published, there were a number of knock-off surveys on Facebook. I enjoyed reading people’s comments, and it confirmed the Boar’s Head survey, folks were not giving up their cheese. Chocolate was the most to go.)

Other findings from the Boar’s Head survey included:


“Cheese is an iconic food not just in America, but around the globe,” says Carlos Giraldo, senior vice president of marketing and innovation for Boar’s Head Brand. “We wanted to help showcase just how much people here in America love their cheese. At Boar’s Head, we are committed to providing the highest quality delicatessen products, nothing less. From premium, age-imported specialties, to America’s favorites like American and cheddar…” 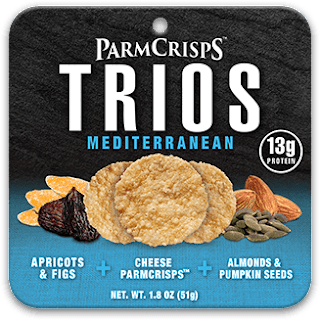 Traditional cheeses reign; however, consumers are very welcoming of new cheese forms and flavors. One of the hottest new cheese formats is baked or dehydrated 100% cheese snacks. These shelf-stable snacks appeal to low-carb and keto dieters who must forego traditional salty, crunchy, starchy carbohydrate-based chips, crackers and curls.

To read more on this booming cheese sector, including a slide show of new products, link HERE to an article I recently wrote for Food Business News titled “New cheese snacks provide the crunch carb-avoiders crave.” 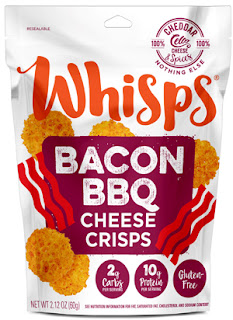 One such new concept comes from That’s How We Roll LLC, a leader in the baked cheese snack category with ParmCrisps, a line of artisan-crafted, crunchy crisps made from 100% aged Parmesan cheese, with or without herbs and seasonings. The company is now rolling out ParmCrisps Trios, a shelf-stable, protein-rich blend of sweet dried fruit, crunchy nuts and seeds, and crispy ParmCrisps.

All three varieties contain almond and pumpkin seeds. It’s the fruit that varies. Original includes apricots and craisins. Mediterranean contains apricots and figs, while Tropical includes mangoes and pineapple pieces. Each pack provides 240 to 260 calories, 14 grams of fat and 13 grams of protein. Each 1.8 ounce pack has a suggested retail price of $3.99.
Schuman Cheese is growing its successful Whisps Cheese Crisps snack line with Bacon BBQ and Tomato Basil varieties. These join Asiago & Pepper Jack, Cheddar and Parmesan. Made with pure cheese, one serving of the gluten-free snack provides 10 or more grams of protein. 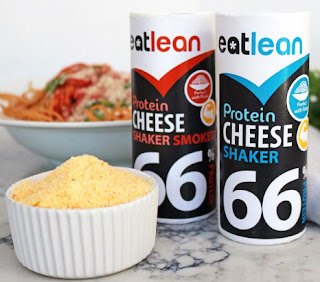 In the U.K., Laurels Farm continues to grow its eatlean Protein Cheese brand. The eatlean cheese is made just like any other regular cheddar using natural ingredients by real cheesemakers on a real dairy farm, according to the company. It is, however, lactose-free, with a 100-gram serving containing 169 calories, 3 grams of fat and 37 grams of protein. Regular cheddar only contains about 25 grams of protein. Based on this composition, the cheese is likely made using ultra-filtered milk.

The eatlean Protein Cheese comes in many formats, including snack bars, and most recently, Protein Cheese Shaker. It’s dried and grated eatlean cheese and marketed as a way to add flavor and protein to prepared foods. In this format, it is 66% protein. The shaker product comes in original and smoked varieties. 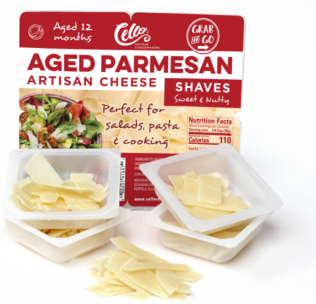 Another premium-positioned product is Cello Grab & Go, also from Schuman Cheese. The company is making its most revered Cello cheese flavors in individual snack-size portion packs sold in packages of four. Varieties are shaved Aged Parmesan, sliced Dutch Gouda, cubed Creamy Fontina, and sliced and cubed Sharp Cheddar. (Read more about this product Monday as a Daily Dose of Dairy).

Another one of my favorite out-of-the-chunk cheese innovations comes from Lotito Foods. It’s Cheese Folios, a product that debuted less than two years ago and is now being relaunched with a new look and new serving ideas.

The Cheese Folios product line is par-baked sheets of cheese that are made from Cheddar, Jarlsberg or Parmesan all-natural cheeses. This innovative breakthrough offers chefs creative ways to use cheese to be molded as a topper, shell, wrap and in numerous recipes. The patent-pending lightly baked (1.5 ounce) sheets come five to a pack and are separated by parchment paper. Lactose- and gluten-free Cheese Folios provide 13 grams of protein per serving and a mere 1 gram of carbs.

With all of these new cheese innovations, high-quality, consistent and economically produced cheese is paramount to success.
Congratulations are in order to all of the winners of the World Championship Cheese Contest, which took place in early March in Madison, Wis. Read more about the winners HERE.

You can taste and purchase many of the winning and runner-up cheeses at the International Cheese Tech Expo on Wednesday evening, which is hosted by Chr. Hansen Inc.

Hope to see you in Milwaukee next week.