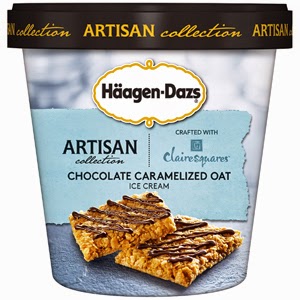 The days are longer. The sun is warmer. Ice cream season is near.

Though ice cream is enjoyed all year long, sales do tend to peak during the balmy, hot summer months. This, of course, did not happen in many major cities around the U.S., and for that matter around the world, in 2014. An unseasonably cool summer, combined with astronomical butterfat prices equated to a tough year for ice cream.

Well, I’ve been told by many that 2015 is going to be a much better year. One of the key drivers is the Millennial demographic who finds ice cream to be an ideal dessert as well as an any-time-of-day treat. But not just any ice cream. Read more about what makes Millennials tick.

Understanding Millennials
Born between 1979 and 2000, the Millennial consumer entered a world of infinite choice. Their parents taught them that customization is a necessity not a luxury. (Did you know there are 87,000 possible beverage combinations at Starbucks?)

Millennials (80 million) will comprise more than one-third of the U.S. population this year, eclipsing Baby Boomers (76 million) in number and importance. They are projected to outnumber non-Millennials by 2030.

Every year, more of the Millennial demographic enters the workplace, marries and starts a family. As the purchasing power of these self-proclaimed foodies increases, the culinary scene is adapting to meet their evolving cravings.

According to The Hartman Group Inc., with globalization and digitalization, Millennial palates are experiencing new flavors and textures from around the world on a daily basis. “They have turned toward a whole new world of bold flavors, textures, juxtapositions and techniques,” said Laurie Demeritt, CEO. “They want to be delighted and entertained by the ‘new’ and re-imagined ‘old.’”

The Hartman Group conducted research for the International Dairy-Deli-Bakery Association (IDDBA) on Millennials and their food purchase habits. For more information on the report, link HERE. 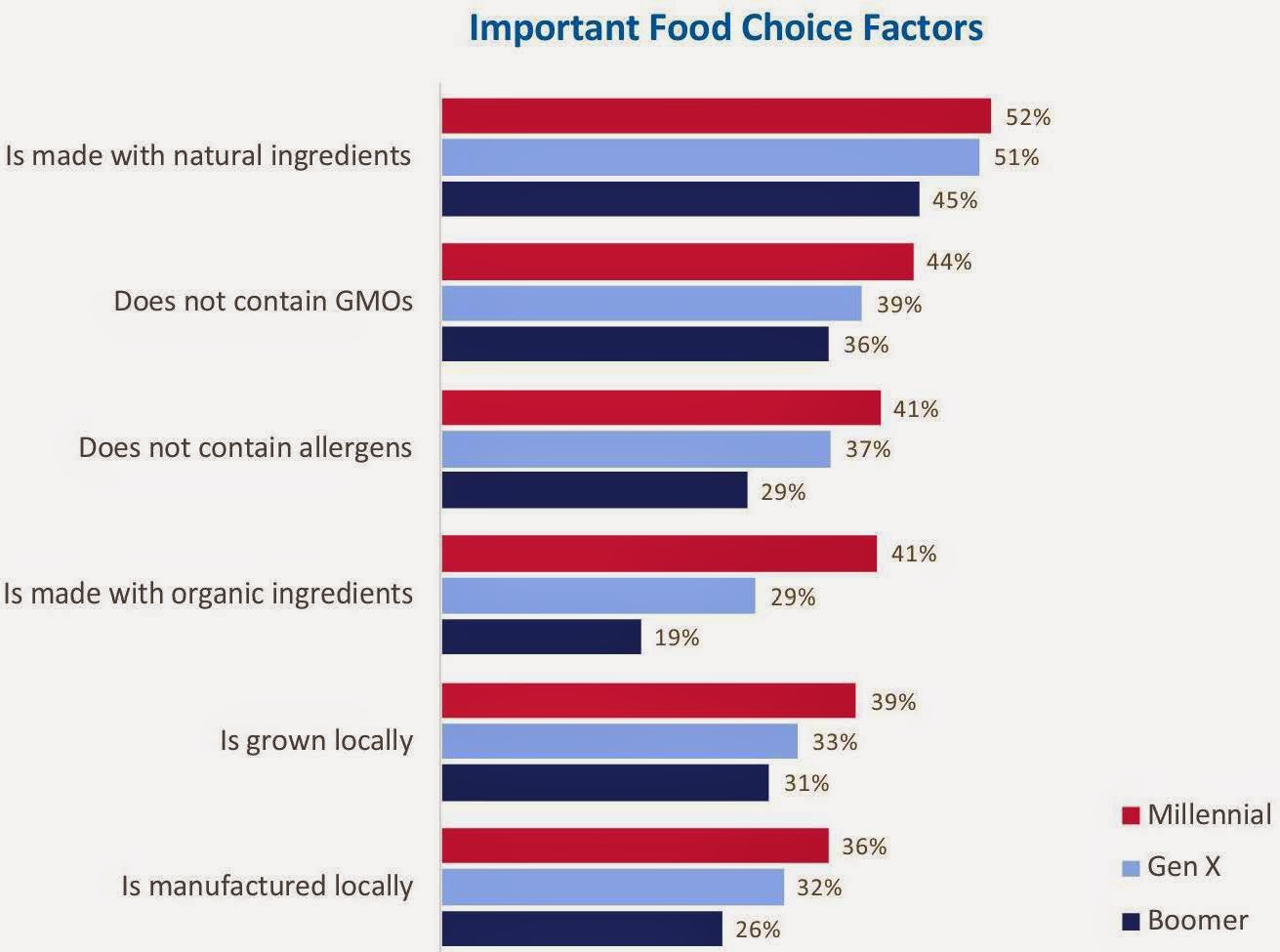 The consumer survey results indicate that 45% of Millennials wants to try anything new and different, as compared to 35% for Gen X and 25% for Boomers. They are more mindful of health, social and environmental issues surrounding their food (See chart.) This influences purchase decision.

Millennials seek out foods made with natural and organic ingredients and are free of GMOs and allergens. Local is very important.
Source: The Hartman Group, Outlook on the Millennial Consumer 2014 (n=2,155 U.S. adults) 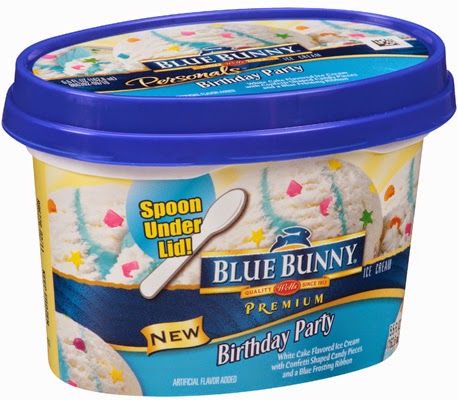 Here’s a real life example. At the Dairy Council of California Functional Foods Task Force meeting earlier this week, a fellow board member shared an example of how Millennials think. She said that at her office, when it’s someone’s birthday, a cake has historically been purchased at Costco to celebrate. A Millennial in her office asked that going forward, cakes be purchased from a local family bakery. He even offered to pay the difference, as it was that important. 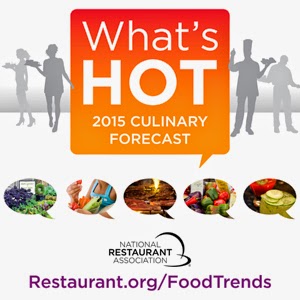 The food choice factors identified by The Hartman Group are very apparent in today’s restaurant scene.

“As consumers today increasingly incorporate restaurants into their daily lives, they want to be able to follow their personal preferences and philosophies no matter where or how they choose to dine,” said Hudson Riehle, senior vice president of research at the National Restaurant Association (NRA). “So, it’s only natural that culinary themes like local sourcing, sustainability and nutrition top our list of menu trends for 2015. Those concepts are wider lifestyle choices for many Americans in other aspects of their lives that also translate into the food space.”

Every year, NRA gets in the kitchen with chefs to reveal the top menu trends for the coming year. For its annual What’s Hot Culinary Forecast, the NRA surveyed nearly 1,300 professional chefs--members of the American Culinary Federation--to find which foods, cuisines, beverages and culinary themes will be hot trends on restaurant menus in 2015. 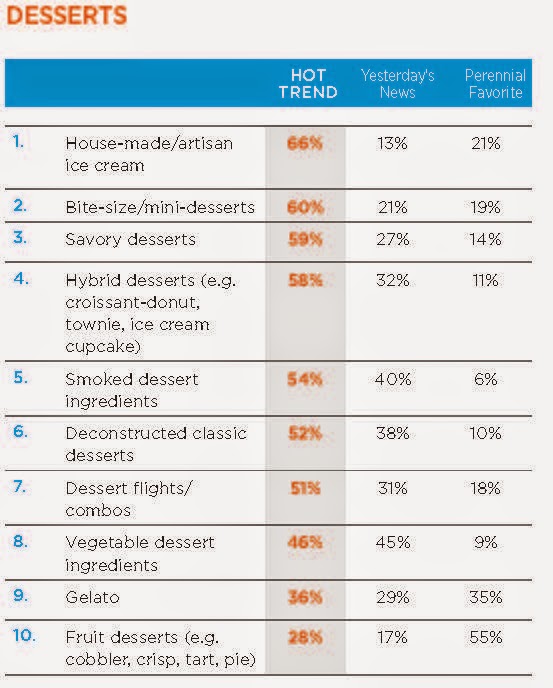 The NRA surveyed 1,276 American Culinary Federation members from October to November 2014, asking them to rate 231 items as a “hot trend,” “yesterday’s news” or “perennial favorite” on menus in 2015.

On the dessert menu, the What’s Hot in 2015 survey predicts “house-made/artisan ice cream” to be the top trend. Gelato remains popular in the #9 spot.

For the first time, the What’s Hot survey highlights overarching trends to watch in 2015. They are:
When asked which current food trend will be the hottest menu trends 10 years from now, environmental sustainability topped the list, followed by local sourcing, nutrition and ethnic cuisines and flavors. These are all attributes that translate to retail dairy foods, in particular ice cream.

So what’s going to be hot this ice cream season?

If you did not read my Ice Cream Flavor Forecast for 2015, link HERE.

Many predictions are already coming to fruition, in particular caramel.

If you missed last week’s blog on how caramel and dairy are the perfect marriage, link HERE. 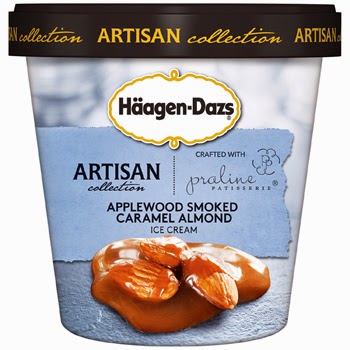 Häagen-Dazs is right on track with reaching out to the Millennials with its new Artisan Collection ice cream line. The brand teamed up with small confection makers from around the country to craft six gourmet flavors that come in 3.6-oz. (single-serve) and 14-oz. containers. 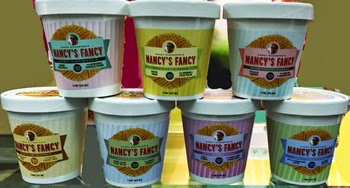 Another on-track line comes from two-time James Beard Award-winning chef and author Nancy Silverton. Created from recipes inspired by the well-loved desserts served at her acclaimed restaurants, the Nancy’s Fancy collection is churned in Southern California and is made with only the freshest, locally sourced, natural ingredients and pasteurized, artificial growth hormone-free milk, according to the company. The line contains no added preservatives, artificial flavors, colors or high fructose corn syrup. 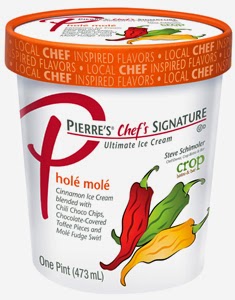 The two flavors are: Croppy Road, which features chocolate ice cream, chocolate-covered marshmallow cups, almonds and a smoky salted caramel swirl; and Holé Molé, which is cinnamon ice cream blended with chili choco chips, chocolate-covered toffee pieces and molé fudge swirl. The Chef’s Signature line and original Signature Ultimate Ice Cream line can be found in most stores where Pierre’s is sold and retails for approximately $4.99 per pint. 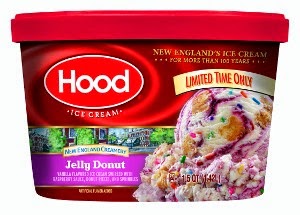 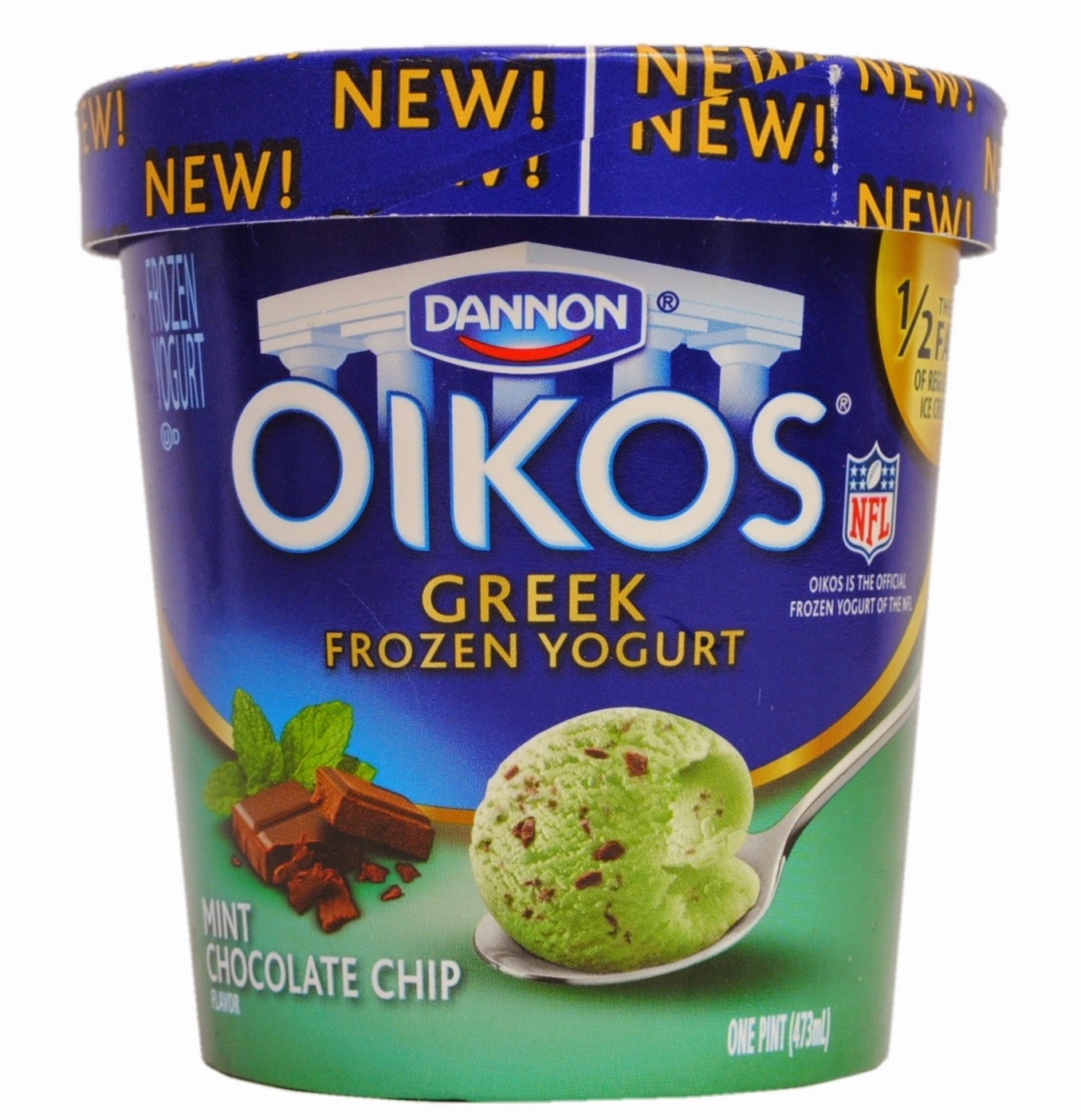 Frozen yogurt, in particular Greek frozen yogurt, continues to experience innovation in the retail sector. In fact, The Dannon Company, which entered the category in May 2014 with six flavors of Dannon Oikos Greek Frozen Yogurt, is adding three new varieties: Cookies & Cream, Mint Chocolate Chip, and surprise, surprise, Salted Caramel. All varieties have half the fat of regular ice cream and 6 grams of protein in every half-cup serving. 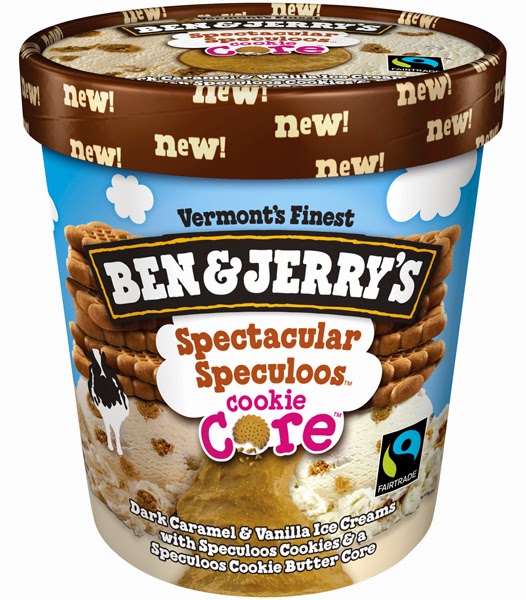 Ben & Jerry’s is growing its Core line with Cookie Core. The concept includes a core center down the middle of each flavor. The new Cookie Core varieties are Spectacular Speculoos (dark caramel and vanilla ice creams with speculoos cookies and a speculoos cookie butter core) and Boom Chocolatta (mocha and caramel ice creams with chocolate cookies and fudge flakes and a chocolate cookie core). 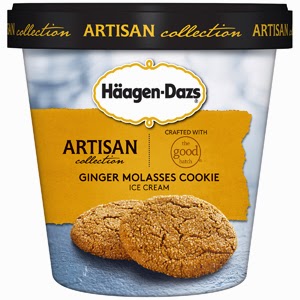 Herbs and spices provide an element of health and wellness to an indulgent dessert. A little goes a long way in terms of taste. Building on the salty caramel trend, the flavor of speculoos, a cookie from the Netherlands, is starting to become popular in the States. This shortcrust cookie has a sweet butter flavor and contains a spice blend consisting of cardamom, cinnamon, clove, ginger and nutmeg. The speculoos flavor works great in ice cream and also makes a flavorful inclusion, possibly coated with caramel or chocolate.

Ginger, which is an important flavor in speculoos, is driving all types of flavor innovation because it provides two types of heat, one that’s refreshing and another that’s spicy. There’s also a healthful halo surrounding ginger, and it has strong ethnic associations. 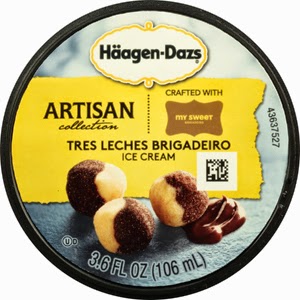 This final flavor--Tres Leches Brigadeiro from the Häagen-Dazs Artisan Collection--seems like the perfect treat to celebrate Valentine’s weekend. Brigadeiro (bree-gah-day-ro) is Brazil’s favorite and most traditional sweet. It is made from a mixture of chocolate, condensed milk and butter that is slowly cooked until it gets to the right consistency. Upon cooling, it is molded into a round shape and covered with chocolate sprinkles or nuts.

I do hope to see many subscribers at IDFA's Ice Cream Technology Conference this March 31 to April 1 in St. Petersburg, Fla. For more information , link HERE.

Have a Happy Valentine’s Day…and be safe on Friday the 13th!