Flavored Milk: Inside and Outside the Classroom

On Dec. 15, 2014, the U.S. 2015 Dietary Guidelines Advisory Committee (DGAC) met for the seventh and final time to discuss their findings and recommendations. The DGAC will now develop an advisory report for the Secretaries of Health and Human Services and of Agriculture that will provide the scientific basis for the 2015 Dietary Guidelines for Americans policy document developed by the federal government.

(To all non-U.S. Daily Dose of Dairy subscribers, it is highly likely that your government has similar programs in place, making this blog a very important read.)

Presentations at the meeting suggest that the next version of the Dietary Guidelines will have strong advice for Americans to cut back on added sugars, salt and saturated fat. The committee recommended that people should consume diets rich in vegetables, fruits and whole grains, lower in red and processed meat, and low in sugar-sweetened foods and beverages and refined grains.

Importantly, for the first time, the DGAC recommended that people limit sugar to 10% of their calories, or about 50 grams—12 teaspoons—per day for someone consuming 2,000 calories. It also recommended that Nutrition Facts panels express added sugars not only in grams but also in teaspoons, which some believe is far easier for people to understand.

Right before the “added sugars working group” presentation, the “saturated fat working group” stated: The consumption of low-fat and nonfat products made with high amounts of refined grains and added sugars should be discouraged.

Flavored milk marketers, this should concern you, especially if you market nonfat chocolate milk to schools and have done nothing to lower the added sugars content.

About School Milk
Flavored milk is an essential part of the National School Lunch Program in the U.S. and in similar programs throughout the world. But parents and school administrators continue to have concerns about the amount of added sugar. (When you compare flavored milk to other beverages, and you see the powerhouse of nutrients milk contains, the concerns are unwarranted; but consumer opinion is powerful.) 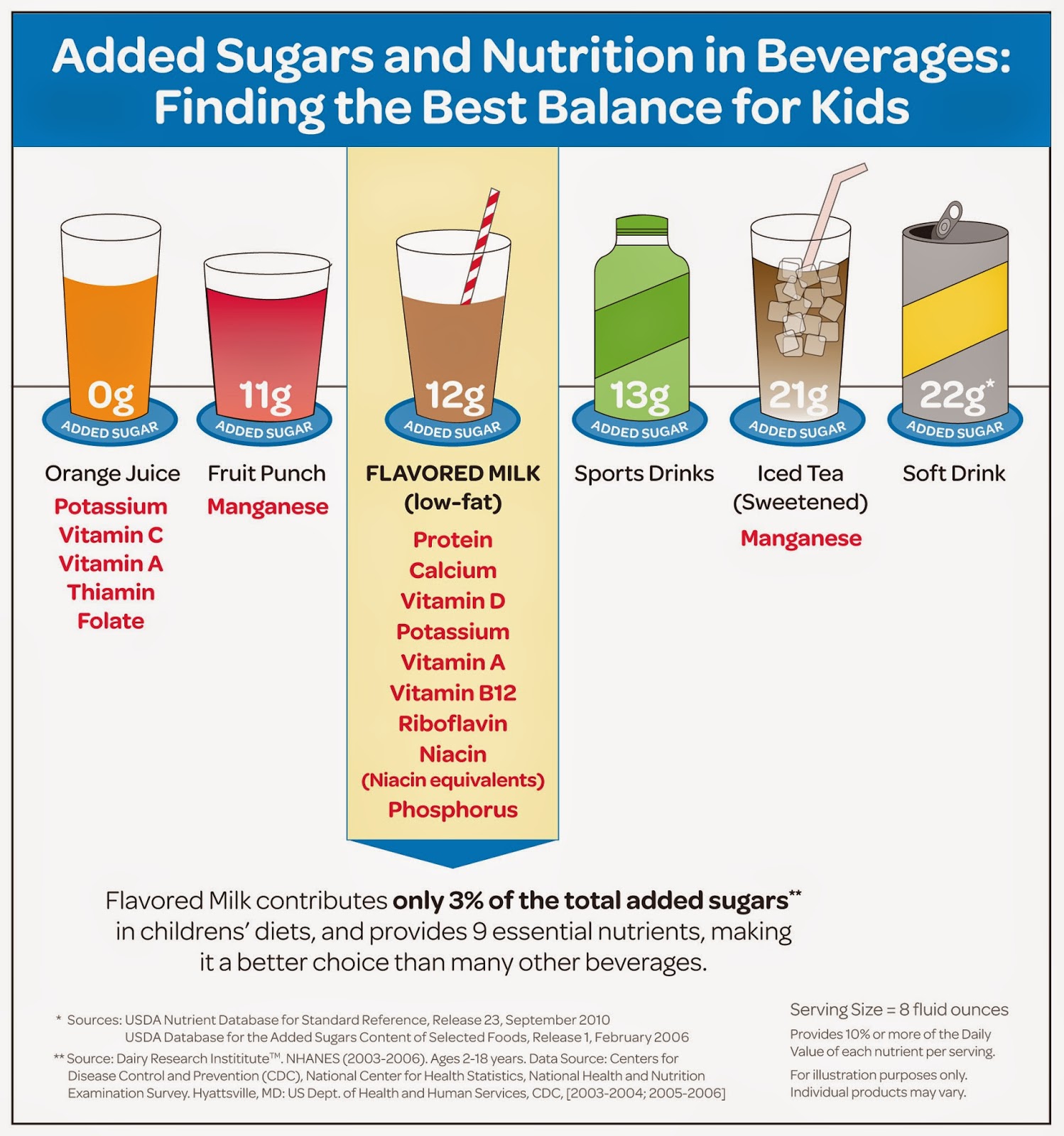 According to new U.S. guidelines, all schools may sell flavored fat-free milk. There are no sugar or calorie restrictions on the products; however, portion size is regulated.

For specific regulations regarding beverages, including milk, which can be sold in U.S. schools, you can access a comprehensive article I wrote for Food Business News HERE.

Here’s the deal, studies show that among elementary school children, milk consumption decreases 35% once flavored milk is removed as an option. What’s a milk marketer to do? The answer is to reduce added sugars and maintain taste.

This can be quite challenging, especially in the U.S., as federal regulations require that flavored milk sold through the National School Lunch Program (for reimbursement purposes, not ala carte) can only be sweetened with nutritive sweeteners.

Need additional information on the regulations? USDA offers many resources that can be accessed HERE.

To read more about how flavored milk in schools has change over the years, link HERE.

To read about the policy governing the type of sweeteners allowed in school milk, link HERE.

To read about added sugars in dairy foods, including flavored milk, link HERE. 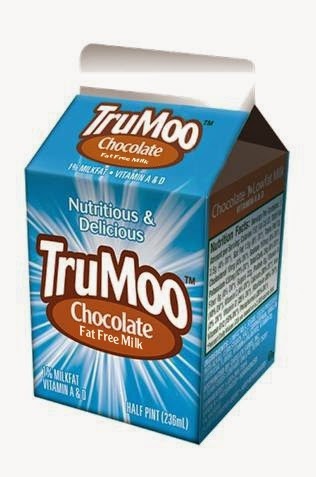 Dean Foods is a leader in the school milk business with its TruMoo fat-free chocolate milk made with 10% to 15% fewer calories and 15% to 20% less sugar than many other chocolate milks.

“We recognize that school nutrition directors need a solution. On one hand, chocolate milk is preferred by children and provides important nutrients that are hard to replace elsewhere on cafeteria trays. On the other hand, we understand the concerns about added sugars,” said Andrea Carrothers, a registered dietitian and the nutrition communications manager for Dean Foods. “More than half the sugar in TruMoo is lactose, the same natural sugar found in all milk.”

Dean Foods successfully reduced up to 6 grams of sugar, or 1.5 teaspoons, per serving compared with its previous varieties. An 8-ounce serving of TruMoo nonfat chocolate milk contains just 10 grams of added sugar, compared with up to 28 grams in soft drinks and other sweetened beverages.

“We don’t think the students will even recognize a difference between the low-fat and the fat-free milk because TruMoo has such a great mouthfeel,” said Jessica Shelly, food services director for Cincinnati Public Schools, which has been selling the TruMoo nonfat chocolate milk since 2011. “And even with the reduced sugar, the milk still has a great chocolate flavor.”

After it was introduced to the schools, she said, “Not only did our students love it, but parents did too because we were able to keep chocolate milk on the menu but with a better nutritional profile.”

The fact is whether white or chocolate or some other delicious flavor (think mocha, orange cream, salted caramel, the list is endless), milk plays a vital role in helping all consumers, especially children, get the nutrients they need for good health. Flavored milk provides the same nine essential nutrients as white milk, including vitamin D, calcium and potassium. These are three nutrients that many adults and children are lacking in their diet.

Studies show that children who drink flavored milk meet more of their nutrient needs; do not consume more added sugar, fat or calories; and are not heavier than non-milk drinkers, according to the National Dairy Council.

Access a great video clip HERE from pediatrician Dr. Robert Murray, who explains what the dairy industry has been doing to improve flavored milk in schools.

We must never forget that taste is paramount in flavored milk, in particular in schools where the nutrition from that carton of milk is critical to daily nutrient intake. If it does not taste good, the kids will not consume the milk.

In a perfect world, school flavored milk would be either 1% or 2% milkfat. Not only would this improve flavor, mouthfeel and nutrition (there are essential fatty acids in milkfat), it would make it easier to lower the amount of sugar—the real enemy—in the formulation.

In case you missed last week’s blog, which can be accessed HERE, dietary fat is no longer the enemy. Research shows that more, not less, dietary fat--including saturated fat, such as milkfat--is what leads to better health, wellness and fitness. Natural fat is an essential part of a healthy diet. A growing body of research shows carbs, sugars and processed foods are mainly to blame for obesity, diabetes and other weight-related diseases, not fats.

Even though it has been said that 2015 may be known as the year Americans get over their fat phobia, specifically natural, animal-derived fats, it is highly unlikely that milkfat will be allowed back on the flavored milk menu in schools in the near future.

So, to make school flavored milk taste better, processors rely on various ingredient technologies. Recently, the Wisconsin Center For Dairy Research conducted a taste test comparing two school-compliant flavored milks, a control (sample A) and one made with Agropur Ingredients’ flavoring technology (sample B). Participants were asked to identify the sample they would like to see in schools. More than half of the participants indicated sample B as the preferred sample to be served. 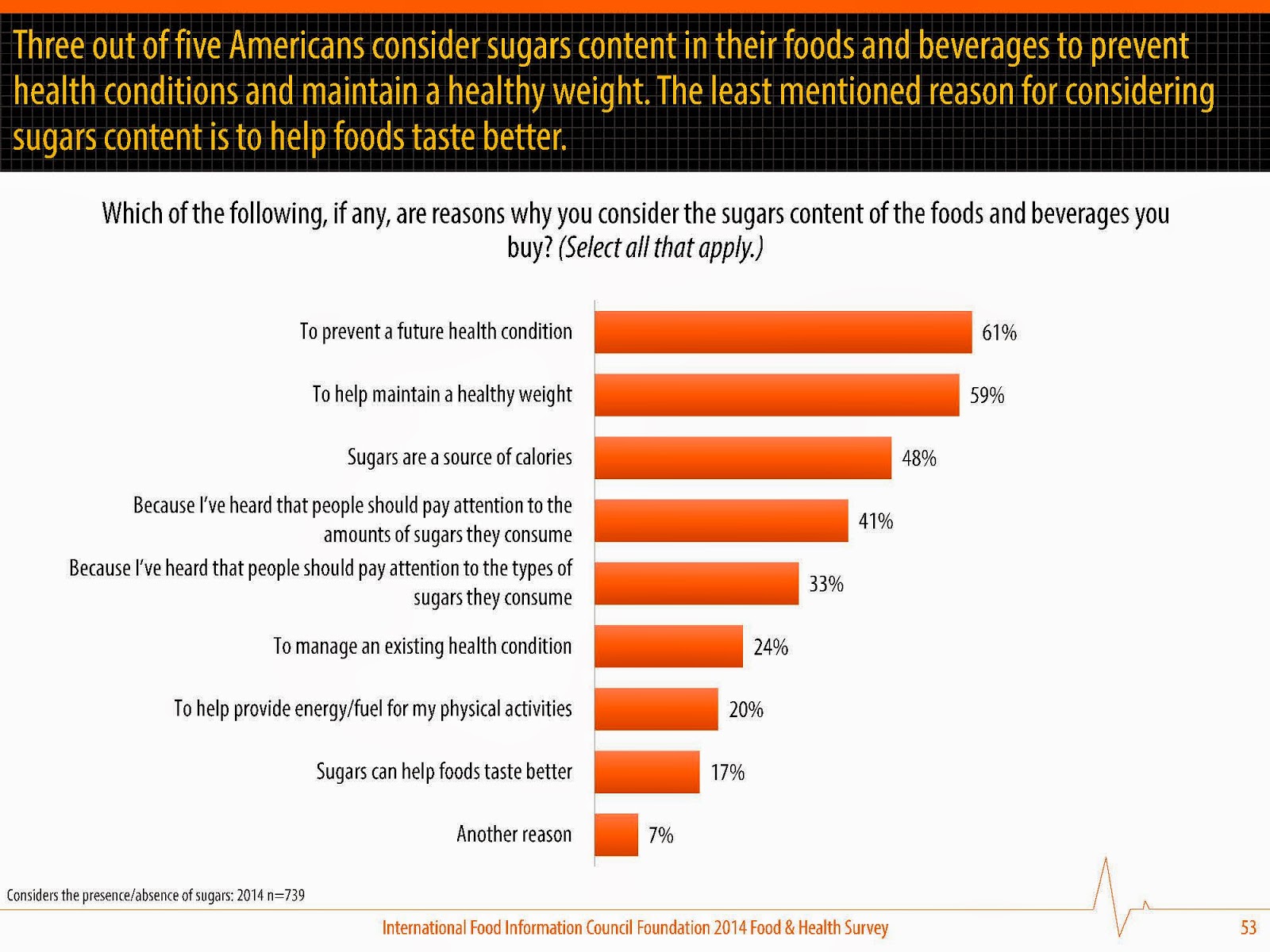 There’s no denying it, sugar is on consumers’ radar. According to findings from the International Food Information Council (IFIC) Foundation’s 2014 Food and Health Survey, 51% of all Americans make an effort to avoid added sugars. Further, three out of five Americans consider sugars content in their foods and beverages to prevent health conditions and maintain a healthy weight. The least mentioned reason for considering sugars content is to help foods taste better, which suggests that consumers believe that a lower-sugar flavored milk can still taste great. That’s up to R&D.

Raise your glass to a better-tasting flavored milk for inside and outside the classroom! Cheers!