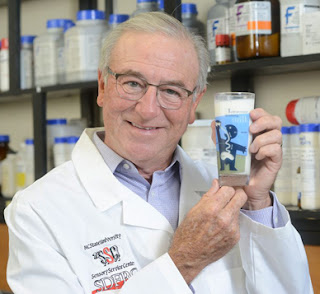 I start this blog on a somber note by sharing news on the passing of probiotics pioneer Dr. Todd Klaenhammer, a North Carolina State faculty member for 40 years and the first food scientist to be elected to the National Academy of Sciences. He is best known for his research group’s sequencing of the complete genome of Lactobacillus acidophilus NCFM (North Carolina Food Microbiology) in 2005. Today, most L. acidophilus strains used in yogurt share the same genetic fingerprint as NCFM.

Klaenhammer died on March 6th at age 69. He retired in 2017 as William Neal Reynolds Distinguished Professor of Food Science. He was a masterful storyteller and knew how to hold his audience’s attention when explaining science, whether speaking to sold-out sessions at an international research conference or sharing his knowledge on campus with students in the lab and in the classroom.

I was fortunate to hear him speak on a number of occasions and even enjoy personal conversation at various industry events. He was a one-of-a-kind guy and will be remembered dearly.

“Despite all of his accomplishments and being sought out by people across the world, he always had time for his team. He also sported a welcoming smile, had a great sense of humor, and enjoyed life beyond work with his family and friends,” says K.P. Sandeep, Head of Department of Food, Bioprocessing and Nutrition Sciences at North Carolina State University and longtime colleague.

“Todd was a larger-than-life figure in the scientific field of genetics of lactic acid bacteria. For those of us fortunate enough to work closely with him, it was a privilege to witness his mind at work, making those leaps in understanding in real time as he furiously forged ahead of the data while designing strategies to test his theories. He saw the potential for probiotics when few others were interested,” wrote Dr. Mary Ellen Sanders (a graduate student in the Klaenhammer lab from 1978 to 1983) and Dr. Colin Hill (a postdoc in the Klaenhammer lab from 1988 to 1990). Both are board members of the International Scientific Association for Probiotics and Prebiotics (ISAPP), an organization that Klaenhammer was a founding member and served on the board from 2002 to 2016. “Todd seemed especially happy when he was able to help young scientists succeed in science. His ‘work hard, play hard’ ethic and his fierce dedication made positions in his lab coveted.”

Rest in peace Todd. I believe he was pleased with how far probiotics have come, especially in yogurt and other fermented dairy foods.

1. Probiotics. Without a doubt, probiotics are the number-one attribute that new yogurt products should possess. These beneficial bacteria are associated with improving gastrointestinal health, which in turn helps boost immunity, among other health and wellness functions.

“At siggi’s, we believe in using real fruit in our products instead of artificial flavors and sweeteners,” says siggi’s founder Siggi Hilmarsson. “We are proud to introduce a new product line with even lower sugar to further reinforce our mission of pushing sugar levels in yogurts lower.”

3. Sugar Content. Enough comparisons have been made regarding the amount of sugar in a cup of yogurt and a candy bar. Keep added sugars low, preferably at zero. Learn to work with milk’s inherent sugars and those naturally occurring in fruit.

4. Fruit. Speaking of fruit, consumers are wanting more of the real deal. Highly processed sugary variegates are no longer acceptable.
5. Package. One year after the onset of the pandemic and overuse (an understatement) of packaging, container recyclability will soon be in the spotlight. The good news is that many yogurt processors have been active in this space for some time.
New York-based Trimona Bulgarian Yogurt speaks to most of these trends. The no-added-sugar probiotic yogurt comes packed in the fully recyclable K3 cardboard-plastic combination. The light-weight thermoformed cup is made from polypropylene and uses up to 33% less material than a conventional direct-printed, thermoformed cup of the same size. It is wrapped with a cardboard outer layer, made from virgin board. The packaging solution has an improved carbon footprint and it can be recycled efficiently, as the cardboard and plastic can be easily separated.

“Trimona introduced America to Bulgarian-style yogurt 10 years ago, and now we’ve gone to the next level of probiotic dairy evolution, or as we call it: Yogurt 2.0,” says Trimona Bulgarian Yogurt founder and CYO (Chief Yogurt Officer) Atanas Valev.
I will end on a hopeful note: Go Illini!