Dairy Desserts—Refrigerated and Frozen—Jazzing Them Up with Nuts, Candies and Clusters 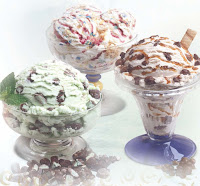 It’s less than 7 weeks until the International Dairy Show takes place in Chicago (September 15 to 18). Today’s blog sponsor—Parker Products—will be exhibiting at booth 8416. Dairy dessert—frozen and refrigerated—inclusions are always a big part of the Dairy Show. Parker will be showcasing its extensive range of flavorful inclusions that can be customized by color, flavor, size and texture. For more information, link HERE.

On this last day of July, National Ice Cream Month, it’s a good time to start planning your dessert—refrigerated and frozen—menu for 2016. The competition is getting greater…and it’s not with your neighboring dairy. It’s with other sweet treats in the supermarket, many of which deliver on either health or local appeal. It’s also with fro-yo shops where consumers can mix up their base flavor and top it off with everything from chopped nuts to fresh berries to gummy worms. (At those weigh-and-pay places, the addition of one gummy worm commands almost an additional 50 cents. My sons know I’m not paying for gummies!)

The fact is, retail unit sales of frozen desserts have been flat to declining for years. (Dollar sales might be up slightly, but this is a function of shelf tag, not volume.) 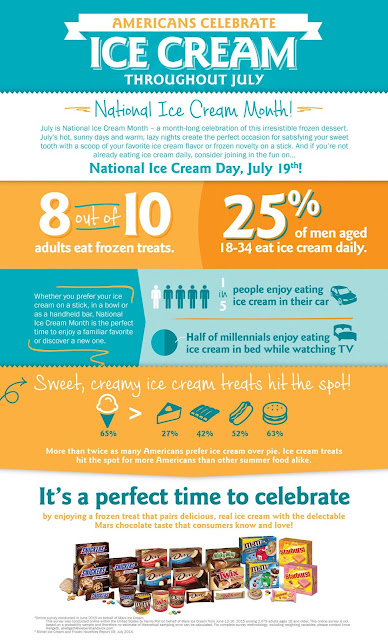 But guess what? We all still love ice cream! But as with everything else, today’s consumers want more from their sweet treats—have it be ice cream, pudding parfait or even decadent yogurt.

According to a new online survey from Mars Ice Cream, conducted on their behalf by Harris Poll in June 2015 among more than 2,000 U.S. adults, two out of three (65%) Americans say ice cream is among their favorite food to eat during the summer. Millennials, more than any other age group (OPPORTUNITY!!!), say ice cream is their favorite summer food. Americans are more than twice as likely to name ice cream (65%) over pie (27%). And sweet, creamy ice cream treats hit the spot for more Americans than summer’s savory standbys of burgers (63%), hot dogs/brats (52%) and ribs (45%).

Eating in bed isn’t taboo for half (48%) of Millennials who say “in bed watching TV” is where they choose to enjoy their ice cream, while nearly one in five (18%) Americans enjoy their ice cream literally on the go, claiming their preferred spot is in the car. (These locations all present opportunity in terms of form and package size, maybe even product positioning. Think calming ice cream for nighttime and road rage wakeup for long commutes.)

Product development requires such out-of-the-box thinking. According to the keynote address given by futurist Mike Walsh at the recent IFT15: Where Science Feeds Innovation, the most successful food producers and manufacturers in the next decade will be the ones who harness science and technology to meet the demands of the first fully digital generation as they become adults.

“If you really want to understand the future, you have to start with the people who are going to live in it,” said Walsh, author of The Dictionary of Dangerous Ideas and CEO of the consultancy firm Tomorrow. “And the most disruptive group of future food consumers, I believe, are people who are currently celebrating their 8th birthday. If you can understand how an 8-year old thinks, you’re a long way toward really understanding a transformative change in consumer behavior. ”

Walsh said that age group is of particular interest because they were born in 2007, the same year the iPhone was introduced. They are the first generation to be connected from birth, so they are growing up with a much different outlook on shopping, cooking and eating than other generations. They will expect products that are customized, readily available and—as already apparently on Instagram—look good enough to be photographed and shared on social media.

“When you think about an 8-year old, how they will be making judgments about food, about food brands, eating and dining, it’s all going to be very connected to their experience on that smartphone,” he said. “Look at the way the next generation forms their views on food today. Look at Instagram—there is some extent to which the next generation doesn’t want to eat a meal unless they are going to take a picture of it.”

The way to keep consumers—8-year olds, Millennials and aging Baby Boomers--interested in anything packaged and sold at retail is to continually jazz the products up with on-trend accessories. Remember when kiwi-strawberry was the “it” fruit flavor? Not too long ago it was pomegranate, followed by acai. Now we see accessories such as chia and quinoa dressing up everything from nutrition bars to refrigerated yogurt.

All types of nuts, coated and flavored, chopped or slivered, as well as candies, crunchies and clusters can add life to the sweet treats. Here are more than a dozen innovative examples.

This product is a few years old but worth revisiting, as the concept presents a great deal of opportunity, especially around the holidays. From Ambach in Germany, this limited-edition Tiramisu Kaffee Eiscreme (starting from the bottom up) features a layer of tiramisu-flavored ice cream, lady finger biscuits, tiramisu-flavored sauce, coffee-flavored ice cream and cocoa-covered cake pieces. This spectacular creation is finished with a drizzle of marsala wine. What really makes this product standout is the clear plastic container—showing the consumer exactly what’s inside—along with the decorative cardboard wrap that showcases a very festive bow, positioning the dessert as the perfect hostess gift for holiday parties. 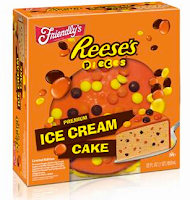 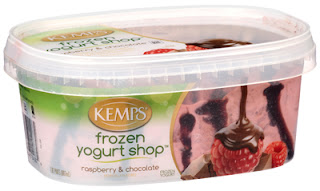 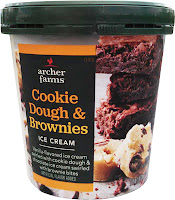 There are also gelato pints in offerings such as Amaretto Cherry (amaretto gelato with a cherry-flavored swirl and cherry chunks), Salted Caramel (caramel gelato with salted caramel swirl and a hint of sea salt) and Triple Chocolate (chocolate gelato with a chocolaty swirl and white chocolate flavored chunks). 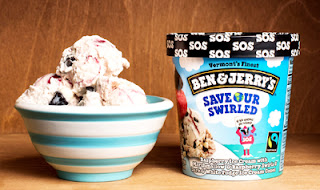 Millennials want their food to make a difference, so leave it to Ben & Jerry’s to give them what they want. With the Paris Climate Summit looming in December of 2015, Ben & Jerry’s is meeting the issue of climate change head on with a global campaign to activate fans and citizens around the world. And what would a Ben & Jerry’s activism campaign be without a chunky, swirly, euphoric flavor of its own? Enter the new addition to the lineup: Save Our Swirled. With a bed of raspberry ice cream, swirled with rivers of marshmallow and raspberry, and white and dark fudge cone-shaped chunks, raising consciousness never tasted so good.

“This campaign is as important as any we’ve ever undertaken at Ben & Jerry’s and the time to act is now. We’re beginning to see that we can make an impact,” says Jostein Solheim, CEO of Ben & Jerry’s. “Ben & Jerry’s has committed to dramatically reducing our own carbon footprint in an effort to help keep warming below 2 degrees. With the Paris Climate Summit approaching at the end of the year, we are asking our fans to join us in calling on leaders around the world to support the transition to 100% clean energy now.” 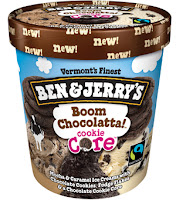 The company continues to grow its Core ice cream line, which originally debuted in 2002 and was reintroduced to U.S. consumers in 2014. The concept includes a core center down the middle of each pint of ice cream. The flavor is said to complement the super-premium ice cream flavors on either side of the core. The most recent addition is Boom Chocolatta! This flavor features mocha and caramel ice creams with chocolate cookies and fudge flakes all surrounding a chocolate cookie core.

So who comes up with all these out-of-the box frozen dessert concepts? It’s not Ben or Jerry. Link HERE to read more about the inclusion-loving Flavor Guru who dreams up some of the most amazing flavor creations. 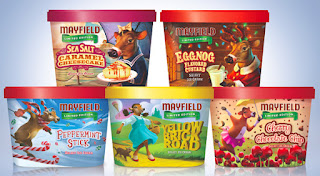 The latter tells the story of Maggie’ summer vacation, when she decided to explore the depths of Lookout Mountain, Tenn., by visiting the world famous Ruby Falls. After gazing at the beautiful waterfall, Maggie walked down the staircase to see what was behind the majestic waterfall. As she passed through the wall of water, Maggie quickly realized that she, just like Dorothy in the Wizard of Oz, had discovered a hidden pathway to the Land of Oz. While walking along the winding Yellow Brick Road, Maggie came upon endless fields of chocolate covered peanuts. Maggie quickly realized mixing the chocolate covered peanuts with Mayfield’s creamy, classic Vanilla Ice Cream would make a delicious seasonal flavor. (FYI: Millenials, as well as 8-year olds, love stories about their food.) 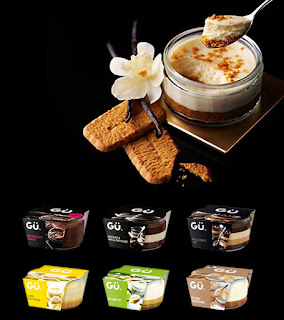 The refrigerated dairy dessert category remains very underdeveloped in the U.S. This is not the case in many Europeans markets, where entire aisles are dedicated to everything from mousse to pudding to fromage frais.

Ehrmann, for one, is known for its decadent dairy desserts. The company recently expanded its Grand Dessert Chocolate Stracciatella line, which is described as “Special cream for special connoisseurs: Seductive chocolate dessert cream topped with a cherry and fine chocolate chips.”

Noble Desserts Holdings Ltd., in the U.K., markets a range of refrigerated dairy desserts under its Gu brand. Some recent offerings include a single-serve ramekin line of layered cheesecakes with biscuit base and decadent toppings. Varieties include: Chocolate &
Vanilla, Lemon, Keylime Pie and more. 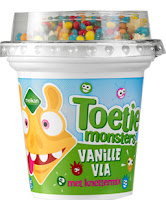 In the Netherlands, Melkan has developed a line of custards for children. Each single-serve cup comes with a dome of candied inclusions. This concept can be expanded to products designed for adult palates, including the emerging category of sweet with heat. Think glazed pecans bits with hints of brown sugar and cayenne pepper. 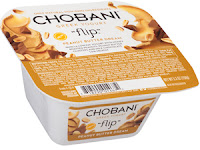 P.S. Have you heard about the opportunity in delivering probiotics via dairy foods?
Read more HERE.