The number of Americans who consider healthfulness when purchasing foods and beverages has shown a significant uptick in the past two years according to findings from the International Food Information Council (IFIC) Foundation’s 2014 Food and Health Survey, which was presented for the first time to media on Thursday, May 15, during an invite-only webcast. While taste and price consistently have been the top-two factors impacting consumers’ food and beverage purchases (90% and 73%, respectively), healthfulness in 2014 almost entirely closed the gap with price, rising from 61% of consumers in 2012 to 71% this year, a 10 percentage-point increase.

Healthfulness means different things to different people. To some, it is the naturalness of the food, including the absence of artificial ingredients. For others, it is products made with easy-to-understand ingredients.

Reading Labels
According to the IFIC study, between 2013 and 2014, there were decreases—some of them substantial—in the categories of information consumers say they look for on the label of a food or beverage. “Expiration date still leads the list at 66%, returning to traditional levels after a spike last year to 82%. The percentage of consumers who check the Nutrition Facts panel was relatively unchanged this year at 65%, along with the ingredients list at 52% and calorie/nutrition information at 42%. 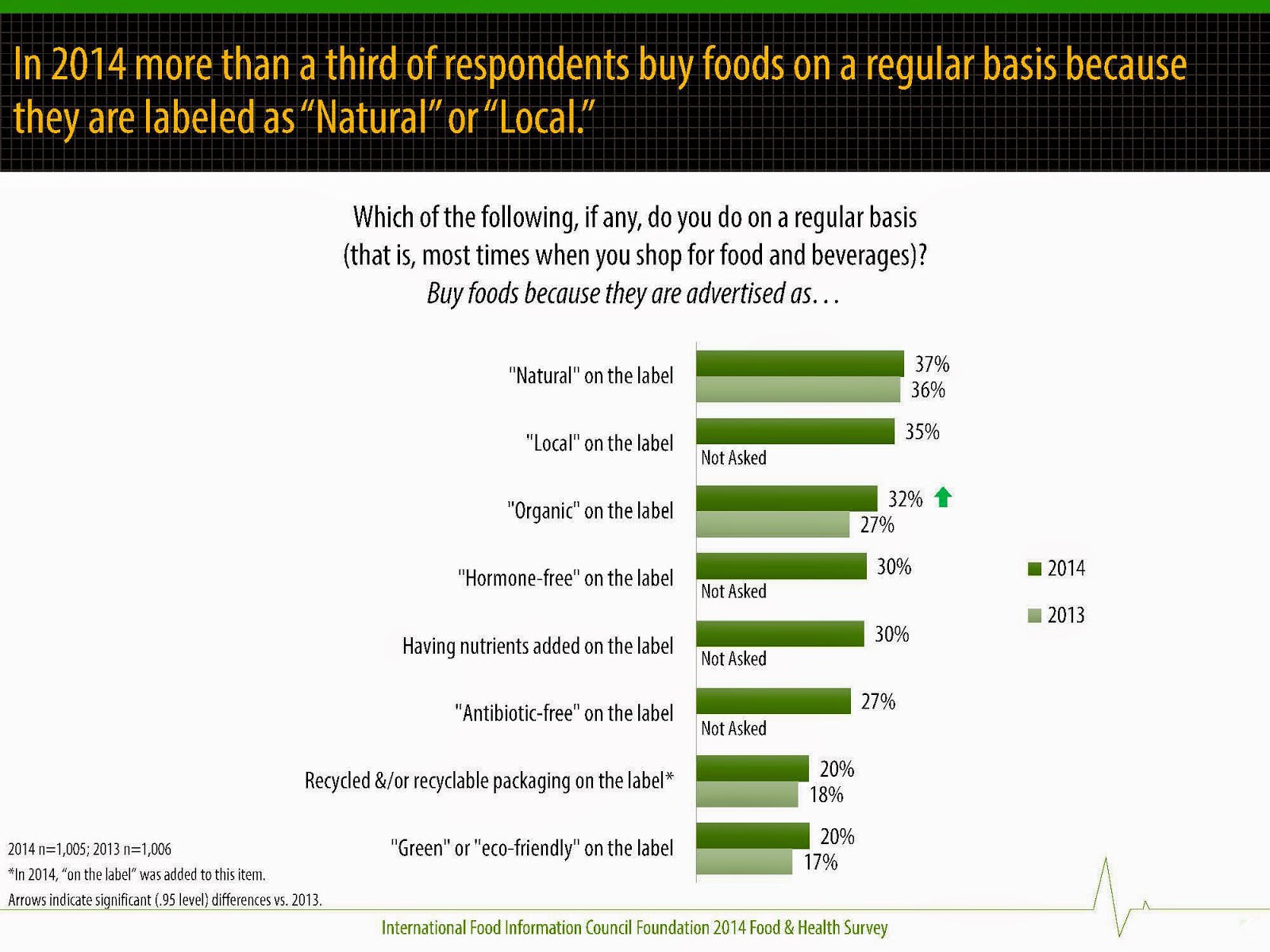 Interestingly, while a solid majority of Americans remain confident in the safety of the U.S. food supply, there nevertheless has been a steady erosion since 2012. This year, 66% of consumers are at least somewhat confident in the food supply, while 30% are not too confident or not at all confident. In 2012, the former figure stood at 78%, while the latter stood at 18%, an overall negative swing of 24 points in three years.

The category of food safety also includes additives. According to the IFIC survey, 23% of consumers consider the chemicals in food or packaging when evaluating the safety of a food. Eight percent consider unfamiliar ingredients when evaluating a food’s safety. 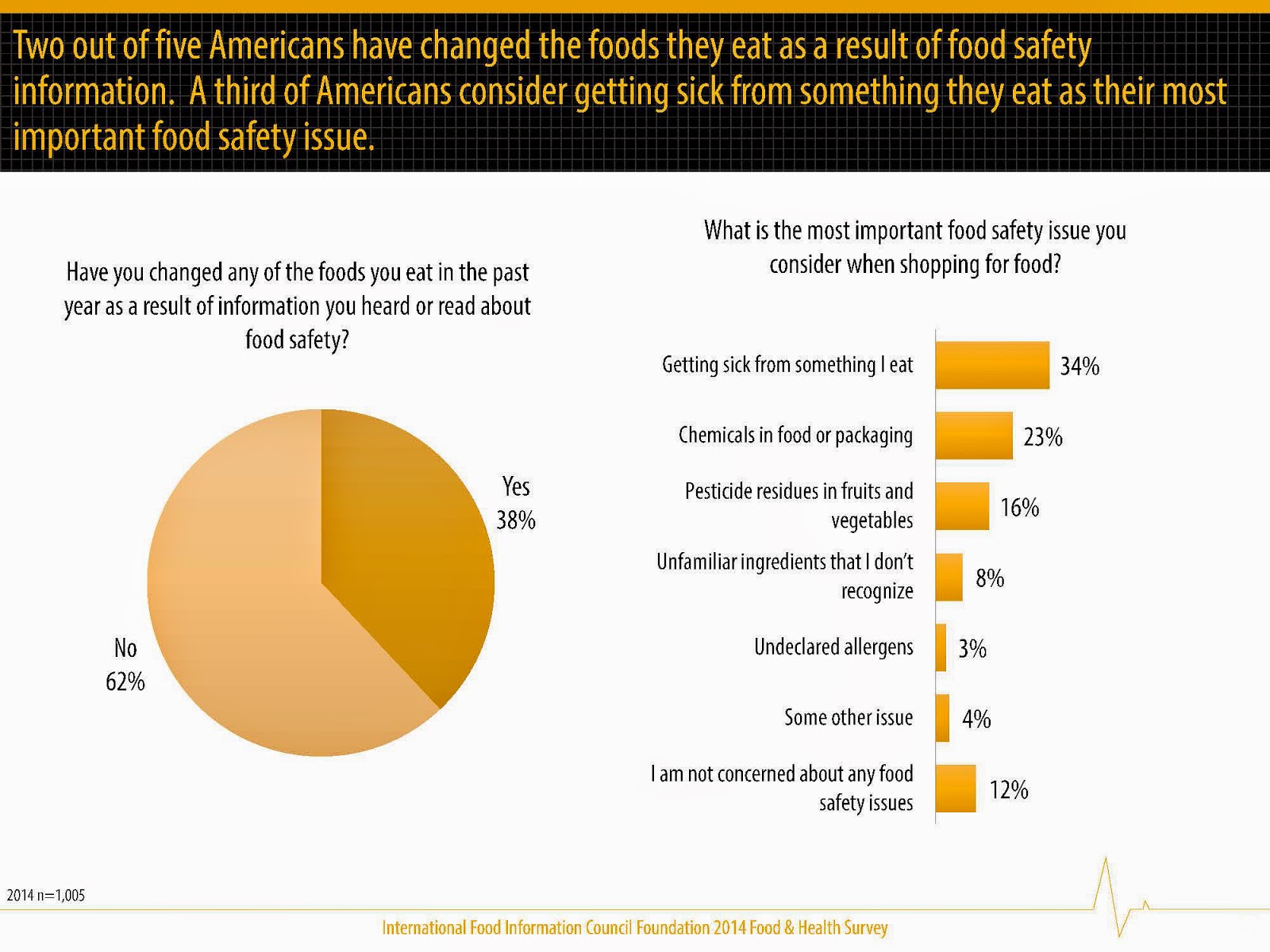 The 2014 Food and Health Survey was fielded by Greenwald & Associates of Washington, D.C., between March 26 and April 7, 2014. It involved 1,005 Americans aged 18 to 80. Results were weighted to match the U.S. Census based on age, education, gender, race/ethnicity and region to be nationally reflective.

The GMO ConnectionThe IFIC survey did not address genetically modified organisms; however, I would not be surprised if it is included in next year’s study, probably under food safety. After all, GMOs, which are plants or animals created through the use of technologies that merge molecules of DNA from the genes of other plant or animal species to create new life forms that previously did not exist in nature nor could be created through traditional crossbreeding techniques, are a growing area of concern among consumers.

Not surprisingly, new products made with non-GMO ingredients are on the rise. Specifically in the U.S., Innova Market Insights reported a 42% year-over-year increase of products launched containing non-GMO ingredients in 2012. Furthermore, HealthFocus International found that 31% of U.S. shoppers surveyed say non-GMO is extremely or very important to them on labels, which was up from 18% a decade ago.

Link HERE for a recent article about the use of GMOs on dairy farms. The author does a fine job of describing the science behind the controversy. 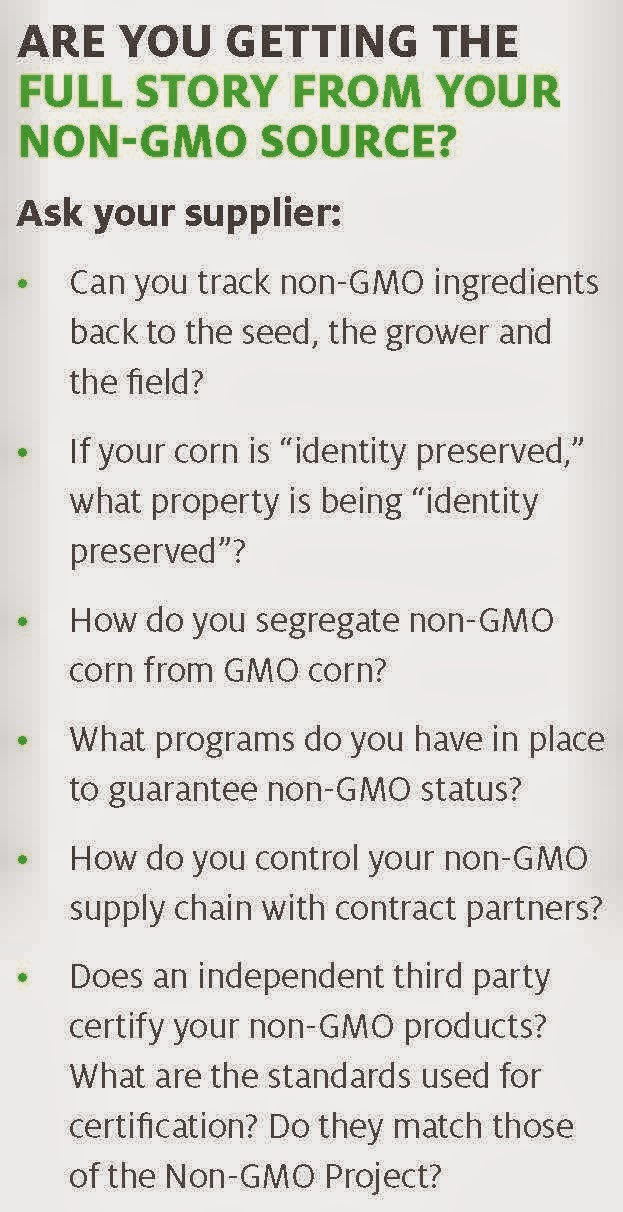 The fact is that there is a growing segment of the population that is demanding non-GMO foods. According to Packaged Facts’ October 2013 report entitled “Non-GMO Foods: Global Market Perspective,” global sales of non-GMO food and beverages are projected to reach $550 billion in 2014, or nearly 11% of the global market. “However, this market exists largely under the rubric of organic products, and the question remains whether non-GMO will simply bolster the case for organics, or truly mark a fork in the road for the food industry,” says David Sprinkle, research director.

Packaged Facts estimated a compound annual growth rate of 28% in the number of non-GMO foods and beverages introduced globally between 2009 and 2013. The number of product launches doubled between 2009 and 2010. Launches remained stable during the following two years but experienced a surge of about 25% in 2013. “The key areas of opportunity are currently to be found in Europe, where consumers are seemingly opposed to all things GMO, and in the U.S., which is the main producer of GMO crops,” says Sprinkle.

The good news for dairy foods formulators is that ingredient suppliers are broadening their portfolio of non-GMO ingredients, from starches and flours to sweeteners and nutrition ingredients. This handy checklist from Ingredion includes questions you should be asking your suppliers.

Here are some recently introduced either non-GMO or clean-label cultured dairy foods innovations: 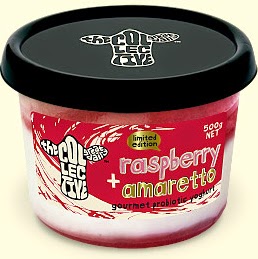 In Germany, MyMuesli Müslidrink is a lactose-free, organic drinking yogurt with Bircher muesli. It comes in three varieties: Apple & Banana, Blueberry and Original. The company touts that the product is free of artificial colors and flavors, as well as GMOs and preservatives. For more information, link HERE. 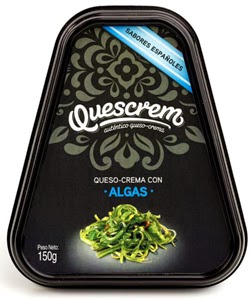 To learn more about Ingredion’s portfolio of non-GMO ingredients, contact Ingredion at 866-961-6285 or visit HERE.
Posted by Donna Berry at 2:30 PM