Creative Cheeses: Slice It, Spread It, Melt It 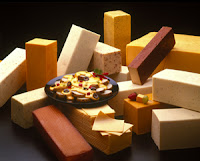 It’s less than six weeks until the International Dairy Show takes place in Chicago (September 15 to 18). Today’s blog sponsor—Ingredion—will be exhibiting at booth 7833. The company will showcase its ingredient technologies in array of dairy products, including cheese products. For more information, link HERE.

If you ever wondered who eats the most cheese, it’s the French. According to the International Dairy Federation, the French sliced, spread or melted their way through 57.1 pounds of cheese per person in 2013. This is compared to less than a tenth of a pound per person in China. But that number is climbing, reflective of a trend in Asia for more Western food, including cheeseburgers and pizza.

Cheesemakers are constantly trying to create new forms and flavors to keep us eating cheese. Let’s take a look at some recent innovations, including winners from this year’s World Dairy Innovation Awards and the recent American Cheese Society’s annual Festival of Cheese. 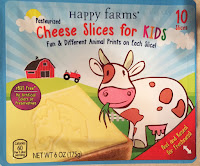 Just in time for back-to-school, private-label retailer Aldi is introducing Happy Farms Cheese Slices for Kids to the U.S. market. Ten pasteurized cheese slices come in a resealable 6-ounce container, with each slice featuring an imprinted design of a horse, puppy or, of course, a happy cow. The product is made in Germany. 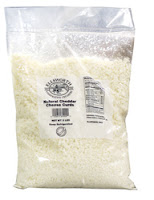 Ellsworth Cooperative Creamery, known for its cheddar cheese curds, has introduced a new product for chefs and foodservice operators. Cheese Curd Crumbles are small pieces of cheese curds that are too small to be sold at retail for snacking but can be used as an ingredient in a variety of applications, such as mixed into sausages or burgers. The crumbles come in 5-pound bags. For more information, link HERE.

Prima Donna maturo is now available as a prepacked wedge of 5.3-ounce exact weight for the convenience-oriented consumer. Prima Donna maturo combines the famous Dutch art of cheesemaking with the traditional flavor of Parmesan cheese, creating a unique specialty cheese for everyone who enjoys the Italian way of life: “Formaggio con passione.” The cheese is imported into the U.S. by Saputo Specialty Cheese. It is produced in Holland by Vandersterre Holland B.V. For more information, link HERE. 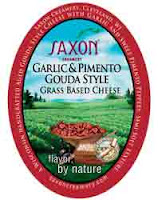 Saxon Creamery’s new Garlic & Pimento Gouda is a flavorful, versatile cheese perfect for snacking or cooking. The creamy, butter gouda is complemented by a hint of garlic and the sweetness of pimento peppers. It’s perfect for a grilled cheese sandwich or shredded over soup and chili. For more information, link HERE.

Bacon and smoky flavors continue to be popular in cheese. Holland’s Family Cheese’s award-winning Marieke Gouda is now available with bacon. Made at its farmstead operation in Thorp, Wisconsin, using an authentic old world gouda recipe with imported equipment and cultures from cheesemaker Marieke Penterman’s native Holland, this new variety can be used to deliver smoky cheese flavor to burgers, flatbreads and sandwiches. For more information, link HERE. 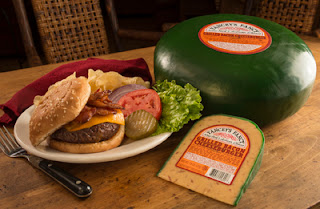 Maple complements the smoky and bacon trend. And for the first time, real maple syrup is being used in cheese. Quebec, Canada cheesemaker Au Gré des Champs has launched Mishtan, a semi-firm raw cows milk cheese that is ripened for three months and washed with boreal forest spice-macerated maple syrup as it matures. 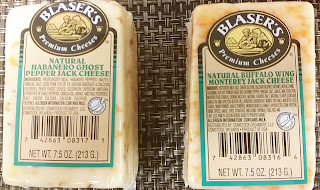 Hot is hot…and the best way to get hot in cheese is with chilies. Chilies present an opportunity for all types of flavor innovation, as they are associated with the most popular international influences in today’s food industry. They also complement the milky, creamy dairy base, as it balances and mellows delivery of heat while allowing the flavor of chilies to be tasted. This is something not possible in many other food applications, where the upfront heat is so intense that it overpowers the flavors of the chilies, which can range from earthy to fruity to smoky. Chile peppers range in heat levels. The guajillo and aji panca have the least amount of heat on the Scoville scale, while the Bhut Jolokia, also known as the ghost pepper, is recognized as the hottest pepper in the world.

Comstock Creamery/Ellsworth Cooperative Creamery is heating up the category with Blaser’s Habanero Ghost Pepper and Blaser’s Buffalo Wing cheeses. Both are made with natural Monterey Jack cheeses.  For more information, link HERE.

The American Cheese Society (ACS) hosted its annual Festival of Cheese in Providence, R.I., from July 29 to August 1. One of the biggest events of its kind, the 32nd annual festival featured American artisan and specialty cheeses from the 2015 ACS Judging & Competition, highlighting the winners across a range of styles. For more information on ACS, link HERE.

The American Cheese Society was founded in 1983 by Dr. Frank Kosikowski of Cornell University as a national grassroots organization for cheese appreciation and for home and farm cheesemaking. The competition began in 1985 at the third-annual conference with 30 cheesemakers entering 89 cheeses in seven categories.

Touted as the yearly “Cheese Oscars,” this year’s contest drew a total of 1,779 entries in 109 categories from 267 producers located in North and South America. Entering companies represented 31 U.S. states, three Canadian provinces and Colombia. In all, 355 awards were presented: 95 firsts, 127 seconds and 133 thirds. For a complete list of winners and judges, as well as details on the competition, link HERE. 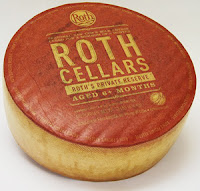 Celtic Blue Reserve from Glengarry Fine Cheese in Ontario, Canada, was named Best of Show, marking the first time a Canadian cheese has won the top honor. The Best of Show round has all first-place cheeses in the 109 categories competing for the top honor. 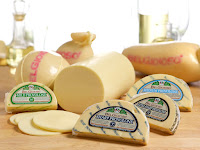 BelGioioso came out as a big winner with its Sharp Provolone Mandarini and BelGioioso Black Truffle Burrata receiving First Place, Best in Class awards. This is the third consecutive first place award for BelGioioso Sharp Provolone Mandarini, winning first at the U.S. Cheese Championship Contest earlier this year and the World Championship Cheese Contest in March 2014. BelGioioso Black Truffle Burrata was awarded a first place blue ribbon in the Cheeses with Flavor Category, taking first in the same category in 2014. BelGioioso American Grana received its fourth consecutive award in as many contests, judged as one of the best cheeses in the Parmesan category. 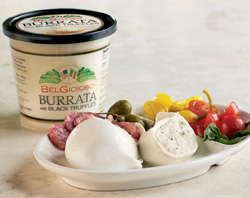 “Sharp Provolone was the first cheese we produced in 1979 and is the cheese our company was built on. We are very pleased to continue to be recognized as the finest Provolone cheese in the industry,” says Gaetano Auricchio, vice president of sales. “Our Master Cheesemakers handcraft this Provolone using our homemade cultures and hand‐forming techniques. The Mandarini is hand roped and aged for seven months, then waxed and hand stamped for a traditional finish. The flavor is deep with a sharp, piccante accent.”

Burrata is a long-time popular choice for appetizer menus and cheese plates. BelGioioso added a delicate, subtle flavor to this luscious fresh cheese with Black Truffle Burrata. This cheese starts with fresh Wisconsin milk and is made to order just hours after milking. Each handcrafted mozzarella pouch is filled with a rich straciatella and black summer truffles. For more information, link HERE. 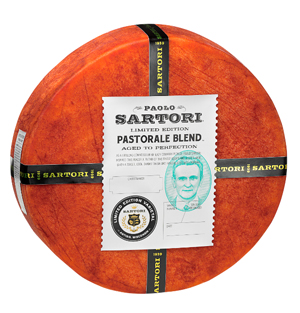 The Pastorale Blend repeatedly receives accolades, including once again, taking top honors at the Wisconsin State Fair. Pastorale Blend is a mixed-milk cheese (cow/sheep) hand dusted with smoked Spanish paprika to deliver a “one of a kind” sweet and nutty flavor.

“Pastorale Blend is a very special cheese for us,” says Sartori’s Master Cheesemaker Mike Matucheski.  “We’ve been lucky enough to find the perfect balance of cow and sheep milk to create an approachable, gratifying mixed milk cheese. The aging of Pastorale helps to develop the flavors while the smoked paprika dusting delivers a striking visual and complimentary flavor.” 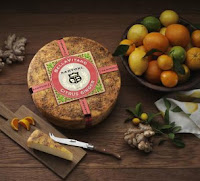 Sartori’s most recent flavor innovation debuted earlier this year. Citrus Ginger BellaVitano is hand rubbed with a unique and exotic blend of spices including ginger, onion, garlic, red bell pepper and citrus. The flavors work well with the slightly fruity, creamy, tangy notes of the company’s signature BellaVitano cheese. Like with all of Sartori’s treated cheeses, the idea is to create a balance among flavors; to allow each flavor to contribute equally.

“When our internal sensory team first tried this cheese, there was a lot of positive feedback. Many enjoyed the punch from the ginger, the sweetness from the red bell pepper and the citrus finish,” says Susan Merckx, marketing director. For more information, link HERE. 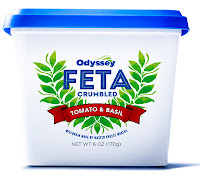 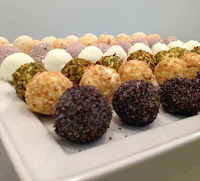 The annual World Dairy Innovation Awards took place in Amsterdam as part of the ninth Global Dairy Congress at the end of June. The judging panel, which included myself, considered almost 220 entries from 30 countries in 18 categories. For a list of all the winners and finalists, link HERE. 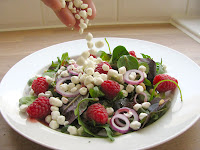 Top honors went to Kourellas S.A. in Greece for its Feta Bites. The company has turned feta into bite-sized snacking balls. They come plain or in seven different combinations with herbs. They are packaged in a resealable tub and can be consumed as is or on top of salad.

Another finalist was DeJong Cheese in The Netherlands. The company developed Cheese Crumbles, which are fresh, soft cheese crumbles that do not stick together in the packaging tub. The Cheese Crumbles are a perfect addition to pizzas, salads and to melt into pasta. They are ready to use and are great for portion control.

Castello Burger Blue Slices from Arla Foods in the U.S. was one of the finalists. The creamy and characteristically tangy notes of Castello Blue Cheese feature balanced sweet and salty undertones. The slices are designed to melt evenly across a patty and stay on the burger during cooking and consumption, a feat nearly impossible to accomplish with traditional blue cheese crumbles.

It’s almost the weekend. Time to clean the grill for some barbecuing!