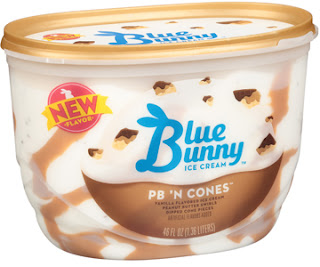 Ice cream innovations for 2017 have been confirmed and product for this summer selling season is likely already being produced. Yes…we are halfway through the month of February. How did that happen?

Now is the time to plan for 2018. I will share some insight from industry observations to give you an idea of what will likely be hot next year. But before I do that, here’s a brief market overview from the hot-off-the-presses 9th edition of Ice Cream and Frozen Desserts in the U.S., from Packaged Facts.

Market overview
“Ice cream and frozen novelties remain among the top-10 food categories in supermarkets. More than 85% of U.S. household use ice cream or sherbet,” says David Sprinkle, research director for Packaged Facts. “And despite the maturity of the ice cream market, a lot is happening in terms of new product innovation.”

Packaged Facts estimates that in 2016 the market for all ice cream and frozen dessert sales, including packaged ice cream and frozen novelties sold through retail channels and ice cream purchased at foodservice outlets, was just shy of $28 billion. Foodservice sales outpaced the retail channel by slightly more than $3 billion. Both segments are expected to see gains going forward, with the total category projected to approach $30 billion by 2020. Retail dollar sales are projected to grow to almost $13 billion while foodservice will surpass $16.3 billion.

“The forces currently shaping the ice cream market are likely to be the same ones that will determine its direction through the next several years. These include the introduction of products that fit in with the ‘free-from’ trend in the food and beverage industry in general; an increase in gelato and superpremium ice cream introductions and sales; reduced sales of packaged frozen yogurts; and more variations on already popular flavors,” says Sprinkle. “In addition, the market will continue to see new packaged ice cream and frozen dessert products emerging that feature successful local or regional foodservice brands.”

Packaged Facts’ research confirms something I’ve written in this space many times.

“Recent innovation in frozen desserts is all about re-interpreting conventions,” says Sprinkle. “It’s combining old-fashioned themes with on-trend ingredients, blending sweet flavors with savory, shifting from diet products to those with nutritional and functional benefits.

“Until recently, claims of ‘low-fat’ and ‘fewer calories’ were the main better-for-you product positioning, but now the focus is evolving to getting more nutrition from every calorie you consume,” he says. “Among the nutritional virtues today’s consumers are seeking in snack and dessert products are protein, healthy fats, antioxidants, probiotics/prebiotics, and natural sweeteners.”

For more information on the report, link HERE. 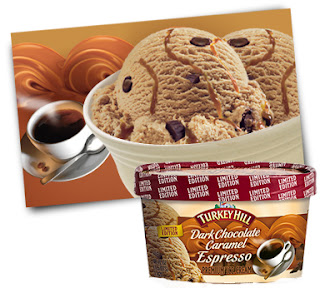 1.    Mild base flavors and very bold, rich inclusions. This is not new, but the twist is that the flavors will be more adventurous. Think burnt whiskey-flavored variegate, espresso-filled chocolate cups and blood orange cheesecake chunks.

Chocolate is not going away but what appears to be trending is chocolate being more the inclusion rather than the dominating base. Chocolate may also be paired with other ingredients to create unique textures. For a healthful twist, think dark chocolate-covered ancient grain clusters or nuts. 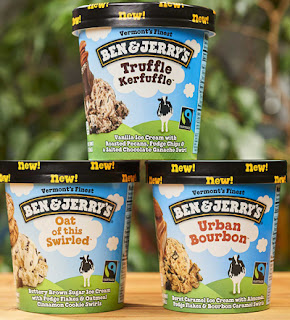 2.    Brown, burnt and toasted. Ben & Jerry’s nailed it with its new Urban Bourbon flavor hitting freezers this month. This burnt caramel ice cream comes loaded with almonds, fudge flakes and bourbon caramel swirl. The flavor name is a nod to big city millennials who are embracing whiskeys and other spirits, which had been shunned by the previous generation of wine and beer drinkers.

“Deep brown liquors are enjoying a renaissance right now,” says Eric Fredette, a flavor innovator at Ben & Jerry’s. “Millennials are embracing classic cocktails like Manhattans and bartenders are being super creative with bourbon. Dessert was the obvious next step. The caramel swirl in this ice cream complements the sweet caramel notes in the whiskey.”

Included in this brown, burnt and toasted flavor trend are variations of caramel. Think bourbon infused, smoky bacon and even cold-brew coffee caramel.

Brown also plays into peanut butter. Despite being a major allergen, peanut butter goes so well with ice cream that manufacturers are willing to take the extra steps in food safety and sanitation to keep peanut butter on the menu.

Wells Enterprises Inc., has a number of new products rolling out for the summer. This includes PB ‘N Cones (pictured), which is vanilla-flavored ice cream, peanut butter swirls and chocolate-dipped cone pieces. 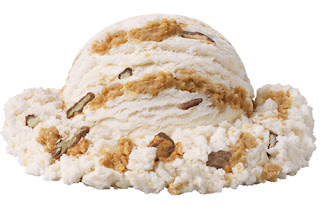 3.    Cold-brew coffee. This cold-processed coffee is hot, especially in dairy products, as coffee and milk are very complementary.
Millennials are driving the growth of cold-brew coffee, as they appreciate the smoother, less acidic taste of cold brew to its iced coffee counterpart. Recognizing this as a growth opportunity, Starbucks has started selling ice cream in select stores to allow for creations such as cold-brew floats and cold-brew malted shakes.

This is what’s on Starbuck’s menu. It’s time to figure out how to translate this into a packaged product?

Affogato is a trio of beverages celebrating the classic Italian dessert. The Classic Affogato is made with two shots of Starbucks Reserve espresso poured over a scoop of ice cream, resulting in the drowning creaminess of the ice cream in rich espresso. The House Affogato adds a touch of demerera syrup and a dusting of cinnamon, while the Shakerato Affogato is made with Reserve espresso shots shaken to an icy froth, poured over ice cream, lightly finished with vanilla syrup and a mint sprig.

Cold Brew Float is Starbucks cold brew poured over ice cream. This is also available with the company’s nitro cold brew. The float menu will include a seasonal specialty, the Vesuvius, which combines cold brew shaken with orange peel, orange-piloncillo syrup and ice. Named after Mount Vesuvius in Italy, when the cold brew is strained over the ice cream, it’s reminiscent of a subtle volcanic eruption, then finished off with a dusting of mocha powder and an orange twist. 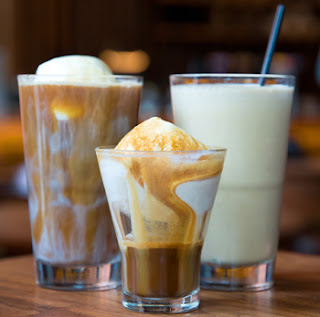 Cold Brew Malted Shake is a nostalgic nod to the corner malt shop. It is cold brew blended with ice cream, malt and bourbon barrel-aged bitters. (This is all about brown flavors.)

4.    Salty other stuff. Salty caramel has become mainstream in the ice cream sector, so it’s time to make other inclusions salty. Ben & Jerry’s is leading the way with new Truffle Kerfuffle. This is vanilla ice cream with roasted pecans, fudge chips and a salted chocolate ganache swirl.

“The salty-sweet combination is a hard one to resist, especially in desserts,” says Fredette. “Salted caramel burst on the scene a few years ago, and now salted chocolate is getting some well-deserved attention.”

What else can get salted? Well, just about anything perks up with a little bit of salt. Some ideas are salty lime, salty pretzels and salty peanut butter (instead of the sweet peanut butter typically used in ice cream.) For something more extreme, think salty tortilla pieces or salty chocolate-covered potato chips. 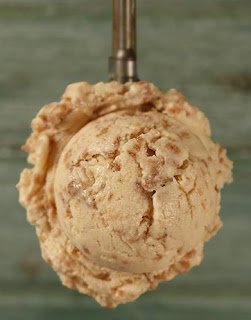 Salty plays well into spice, with cinnamon being the dominating spice. Cinnamon is a characterizing flavor of speculoos cookies, which is trending along with its many variations.

Hudsonville Ice Cream is rolling out Windmill Cookie Butter (pictured), a spin on speculoos and also a nod to its hometown of Holland, Michigan, where windmills are everywhere. This product is cookie butter-flavored ice cream with crunchy cookie pieces flavored with a unique spice blend of nutmeg, cinnamon, clove and ginger.

5.    Fruit goes upscale. I’ve saved the best for last. Fruit ice creams are going upscale, with higher-quality whole fruits (usually infused with a sugar solution to stay soft) being incorporated, with or without additional inclusions. This rides the coattails of the gelato trend, and supports a better-for-you positioning by making a more natural, from Mother Nature impression. 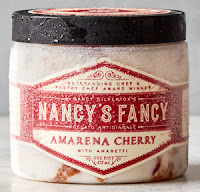 This is showcased in some of the recent rollouts by Nancy’s Fancys, which is the namesake product created by two-time James Beard Award-winning chef and author Nancy Silverton. Created from recipes inspired by the well-loved desserts served at her acclaimed restaurants, Nancy’s Fancy is the chef’s first-ever product line in her distinguished career.

Her three new flavors are: Amarena Cherry with Amaretti, Passion Fruit and Zabaglione with a Citrus Caramel Swirl. The latter is a traditional Italian egg custard flavored with Marsala wine and swirled with citrus-infused caramel. Here’s that flavored caramel concept mentioned in trend #2.

Many of these five trends can be combined to create signature ice cream flavors. The time is now to start getting creative for 2018.