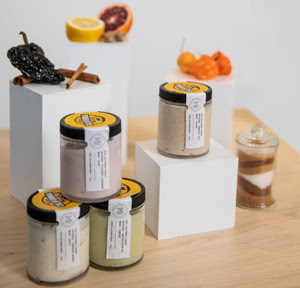 In just a few days many of us will be heading to Anaheim for Natural Products Expo West 2020, where an estimated 86,000 health and wellness industry professionals will gather to experience innovations from more than 3,600 exhibitors. While Coronavirus (COVID-19) was not on the agenda, it inevitably will be a topic of discussion and concern.

For those of you stressing out about what you hear in the news and in social media, here’s an excerpt of what the conference organizers posted on February 27.

“The majority of our Chinese exhibitors are unable to participate in this year’s event and a small number of companies are reducing their presence due to corporate travel policies.

You may have read about the local emergency declared by Orange County yesterday. This is in response to the federal government’s attempt to designate a center in Costa Mesa as a future Coronavirus medical support site and has no impact on the Natural Products Expo West event.

We are taking preliminary precautions by providing additional hand washing and hand-sanitizing stations throughout the event and increasing cleaning in high traffic areas.”


CBD, while still illegal in food and beverage according to FDA, will once again have a very strong presence at the expo. That’s because many manufacturers and marketers are choosing to ignore federal regulations and are opting to work at the state level.

What will make dairy shine even more at expo are the efforts being made by processors to deliver on what is the number-one item today’s shoppers look for on product labels, and that is added sugar content. Reducing added sugars also usually decreases calorie content, which is the number-two item shoppers read.

Chicago-based The NPD Group reports that most (nearly 90%) of today’s consumers read labels, as it’s an important information source for them. The top-two items consumers look for are sugars and calories, both of which had an update with the new labeling rules that went into effect this year for companies with annual sales of at least $10 million. Smaller companies have an extra year to comply.

Fifty-seven percent of consumers who read Nutrition Facts labels look for sugars, and 45% of adults say they look at the label to find information on calories, according to NPD’s Health Aspirations and Behavioral Tracking Services. Sodium (38%) and protein (33%) content follow. Interestingly, while total fat and trans fat are important to a fair amount of people, there is little interest in saturated fat. This is good news for dairy, as is the fact that potassium is now a mandatory callout on the Nutrition Facts label because of its importance in a healthy diet. Nine percent of consumers say they read the label for potassium content, reports NPD.

Successfully lowering added sugars can be challenging, as the food must remain palatable, actually “yummy” is what most consumers want. It requires a toolbox of ingredients and technologies.

For example, did you know that vanilla makes milk beverages seem sweeter? That’s right, adding vanilla to sweetened milk makes consumers think the beverage is sweeter, allowing the amount of added sugar to be reduced, according to researchers from Penn State. (ScienceDaily, June 20, 2019.)

“We are utilizing a learned association between an odor and a taste that will allow us to reduce the added sugar content,” according to Helene Hopfer, assistant professor of food science.

The idea that congruent or harmonious odors enhance certain tastes is not new, according to Hopfer, whose research group in the College of Agricultural Sciences has been experimenting with these “cross-modal interactions” in food since she came to Penn State three years ago. Her goal is to see them incorporated into foods.

Results from blind taste tests indicate that with the addition of vanilla, the added sugar content in flavored milk could potentially be reduced up to 50% without any impact on perceived sweetness.

“We maintain the sweetness perception by having this congruent odor--this learned, associated odor--basically trick the brain into thinking that there is still enough sweetness there,” said Hopfer. “Based on our results, taste-aroma interaction is a robust effect.”

Gloria Wang, who was the lead researcher on the project and now an associate scientist in product development with Leprino Foods in Colorado, conducted the research at Penn State as part of her master’s degree thesis in food science. She tested not only congruent taste-aroma combinations but incongruent combinations as well. It turned out that even a beef odor in milk slightly enhanced sweetness for study participants.

Given widespread concerns about sugar intake and health, manufacturers are reformulating their products to help address consumer demand, Wang noted. She believes the findings of the research, which were published in the October 2019 issue of Food Quality and Preference, offer them a workable option to reduce added sugar in their products and retain the sweetness consumers demand. 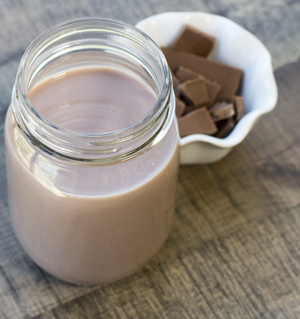 The Penn State study was novel because it did not ask participants to rate individual attributes of the milk such as sweetness, intensity of vanilla odor or milk taste. Instead, participants took a more holistic approach and simply selected the best match for the vanilla milk from four differently sweetened milk choices.

Hopfer’s lab in the Department of Food Science is working on a two-year project funded by the National Dairy Council to develop a reduced-sugar chocolate milk for the National School Lunch Program. The effort, based on the recent research using the synergistic actions between vanilla and sugar to reduce the added sugar content, will be a challenge because of the inherent bitterness of cocoa.

“The amount of sugar in chocolate milk is quite high because cocoa is very bitter, so you need some sugar to decrease the bitterness of the cocoa and then more to make it sweet,” Hopfer said. “We are hoping to utilize what we found with odors to reduce the added sugar content by experimenting to find the sweet spot between cocoa powder, sugar content and vanilla flavor. We know that if it isn’t sweet, children won’t drink it.”

Vanilla may be one part of that toolbox of sugar-reducing ingredients. Introducing umami into some formulations may help, too. A dash of mushroom extract, for example, contributes a savory deliciousness that may enhance sweetness.

“Inulin has become a success as a natural sugar replacer, used in an ever-growing number of products, and its presence means that companies can also flag up the enhanced fiber content on the label,” said food and beverage consultant Julian Mellentin.

Sugar reduction plus more protein is a big driver of innovation in all food categories. This is particularly true with dairy foods.

The new sweetener allulose is starting to show up in reduced-sugar and no-added-sugar dairy innovations. It is often used in combination with other sugar-reduction tools to achieve the best sweetness profile. 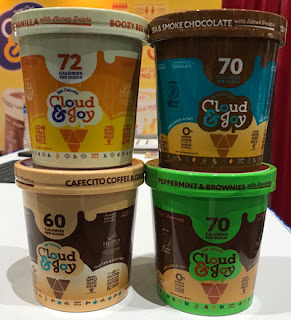 The new Cloud & Joy frozen dairy dessert line exemplifies this approach to sugar reduction. The line comes in four unique varieties, all of which emphasize the low sugar content, and with some varieties, no added sugars. None of them contain sugar alcohols.

The innovative base starts with organic non-fat milk that is combined with various gums and tapioca flour. Sweetness comes from a unique blend of allulose, organic agave inulin fiber, stevia leaf extract, monkfruit and mushroom extract.

The April 2019 announcement by FDA that allulose did not have to be included in total and added sugar counts in U.S. nutritional labeling has cleared the way for much higher levels of use and a move mainstream. Ingredion recognizes the opportunity of allulose in sugar reduction and now has a manufacturing facility dedicated to its production.

Allulose is a sweetener that tastes and functions like sucrose and is in the family of rare sugars. Allulose is absorbed by the body, but not metabolized, making it nearly calorie-free. Allulose is one of the many types of monosaccharides that exist in nature in small quantities and can be found in certain fruits, including figs, raisins and jackfruit. Allulose has a texture and performance behavior like sucrose providing comparable bulk, sweetness and functionality (e.g., browning, freeze point depression, etc.).

“We are advancing our specialties strategy with the unique value proposition offered by allulose for sugar reduction by aligning with one of the most important food and beverage trends shaping our industry and impacting our customers,” said Ingredion’s president and chief executive officer Jim Zallie.

Allulose, along with inulin, stevia and monkfruit, all of which are derived from nature, may assist with added sugar reduction or complete removal in dairy foods. Also part of that toolbox may be the lactase enzyme.

The sweetness of the inherent lactose in milk can be amplified through the addition of the enzyme lactase, as lactose is a relatively non-sweet disaccharide. Its sweetness index is 16, with sucrose being 100. When lactose is broken down by lactase enzyme into its constituent monosaccharides, glucose and galactose, its sweetness is increased approximately three-fold. By incorporating lactase into dairy foods, not only can sweetness be enhanced, but a lactose-free claim is possible.

Darigold is embracing the growth the cooperative has experienced with its Darigold FIT milk, which has 75% more protein and 40% less sugar compared to traditional milk. Launched in the Pacific Northwest market last year, FIT has doubled in sales and distribution over the past six months. To support this growth, the company is investing $67 million in its Boise, Idaho, milk processing facility this year. Value-added milk is alive and thriving for the company.

FIT was developed in response to consumer trends that demand “better for you” products, which are also delicious and convenient. Using ultrafiltration, FIT is designed to give consumers the taste they want while being lactose-free and high in protein without introducing anything artificial. Darigold recently broadened the FIT product line to include whole milk, as well as offering 2% white and 2% chocolate milk.

“FIT was inspired by our farmer owners’ desire to revitalize fluid milk,” said Duane Naluai, senior vice president. “They, more than anyone, know Darigold must provide consumers with new and relevant types of milk that preserve the wholesome and nutritious foundation that makes milk great in the first place. The positive consumer response we have received gives us confidence that FIT is bringing consumers back to fluid dairy.” 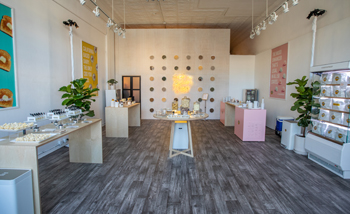 Now, back to CBD…but not cannabis. I had the opportunity to experience a dispensary popup in Venice, Calif., on Saturday, which was serving the original edibles: California Based Dairy (CBD). Produced by the innovative team at Real California Milk/California Milk Advisory Board, the California Dairy Dispensary highlighted the natural, mood-enhancing properties of dairy. It was everything expected from a traditional dispensary only in dairy form, which is natural and legal in all 50 states. 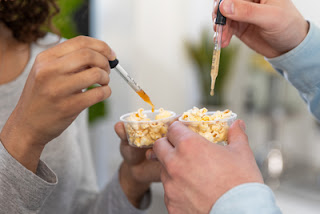 “California-based dairy foods, or CBD for short, not only taste delicious but are a natural way to enter a golden state of feeling everything from bliss to excitement,” said John Talbot, CEO of the California Milk Advisory Board. “A dispensary-inspired setting offers consumers an unexpected and unforgettable way to experience their favorite foods made with real milk produced on family dairy farms using the nation’s most sustainable farming practices.” 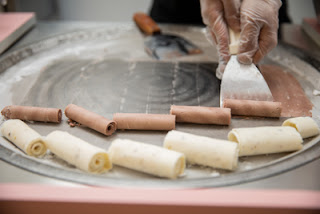 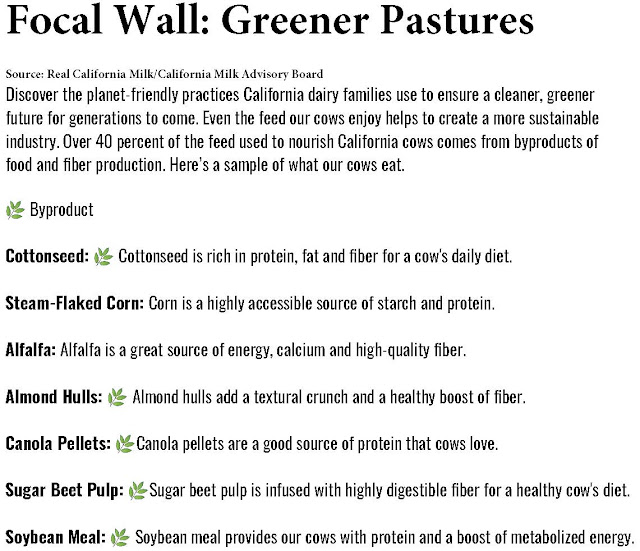 The popup included education as well. There was a focal wall showing the planet-friendly practices California dairy families use to ensure a cleaner, greener future for generations to come. It explained how the even the feed the cows enjoy helps to create a more sustainable industry, with more than 40% of the feed used to nourish California cows coming from byproducts of food and ﬁber production.

This is how dairy stays relevant at Natural Products Expo West. Hope to see you in Anaheim. Safe travels.