Selling Dairy Proteins and Milkfat: An Opportunity in Cottage Cheese and Quark 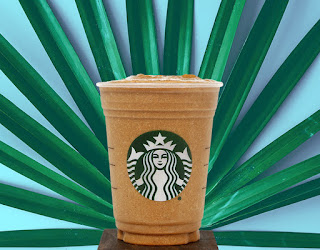 Since its debut on Tuesday (August 14, 2018), the Starbucks plant-based protein blended cold brew has been making headlines in business food and beverage press, as well consumer and social media. It’s all positive. Score another for plant-based foods.

This rollout happened less than a month after FDA announced plans to enforce current regulations that define “milk” as an animal product. Jokes on the dairy industry. The words “plant-based” sell product. The nut and pea folks do not need the word milk.

That’s what the plant-based community is doing. They are innovating and they are doing a darn good job.

That new Starbucks beverage is promoted as being made with slow-steeped Starbucks cold brew, alternative milk (from almonds) and plant-based proteins (predominantly pea) for a delicious, non-dairy beverage that’s a good source of protein and keeps you going throughout the day. It comes in almond and cacao varieties.

Starbucks has been around for 47 years and I never recall menu boards emphasizing dairy protein add-ins--it’s been an option--or delicious farm-fresh dairy cow milk and cream.

This must frustrate you as well as it does me. We’ve got a delicious, nutritious product and we shy away from its origins, its story. Even the word whey has evolved into a category of its own.

I kid you not. About a week ago, in line at my gym’s smoothie bar, I asked the person in front of me who just ordered a customized drink with a scoop of whey and a scoop of pea protein, if he knew where whey came from. Wait for it, wait for it…he responded: a whey plant! I am not kidding.

Yes, catch your breath. I was speechless.

By the way, the new Starbucks drink is tasty. I’ve now had it three days in a row, always the cacao variety--and I am not a chocolate fan, but the cacao powder is clean-tasting, neither sweet nor bitter. On the second day I had them use nonfat milk instead of almond, and on the third day, I requested whole milk. I had no choice on the plant protein powder add-in, which is a premeasured pack. A banana date mix gives it some really yummy flavor and texture.

Let me tell you, whole milk premiumized this beverage. Wowza! For a few grams of fat and at most 20 extra calories, whole milk is the way to go. 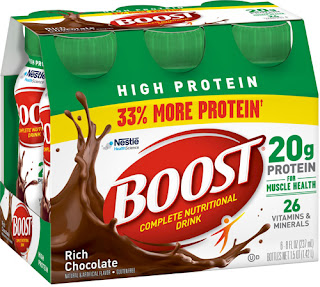 So I pose the question: should we stop worrying about owning the word milk and instead start marketing words such as cow, dairy and farm fresh?

It might be worth a try. Nielsen data for the week ending July 28, 2018, show that sales of traditional milk products dropped 4% year-over-year to $227 million. Conversely, sales of milk alternatives were up 8% over the same period, reaching nearly $35 million.

Here’s a somewhat disappointing rollout. New Boost High-Protein Complete Nutritional Drink features 33% more protein. There’s now 20 grams of protein per 8-ounce serving versus the former version’s 15 grams. The marketing materials promote the importance of consuming ample high-quality protein, especially as one ages. You would never know that almost all of that protein is from milk protein concentrate unless if you read the ingredient legend. I bet if it was plant-based, those words would be up front and center. 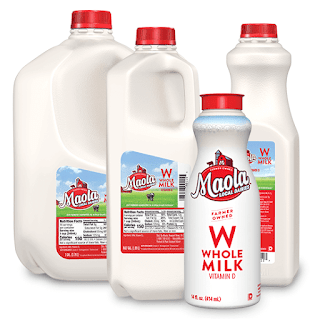 Here’s some good news. Neilsen data showed that not all traditional milks are struggling. The market research firm identified Maola milk as one such brand posting growth in dollar sales compared to a year ago. Way to go!

Maola positions itself as more than just a brand of milk. It’s a group of local dairy farmers who have owned the land, the cows and the bottling centers for nearly 100 years. The company’s generations of experience combined with modern farming and bottling practices enables Maola to protect milk’s wholesome goodness every step of the way, from farms to neighborhood stores. This is communicated on marketing materials and packaging.

Wouldn’t it be great if the regional Starbucks stores told the Maola story?

Neilsen has some other promising data. Within traditional dairy milks, whole milk and lactose-free milk both experienced unit consumption growth year-over-year as of the 52 weeks ending June 30, 2018. 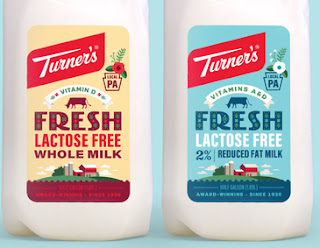 So, where do we go from here?

Let’s talk about those dairy categories that cows still own, namely cottage cheese and quark. Both are experiencing growth thanks to innovation as well as an emphasis on being concentrated sources of protein. Let’s tell consumers where the protein comes from. Talk about the cows, how they graze. Grass-fed is another option to further tell the story.  To view some recent cottage cheese and quark innovations, link HERE. 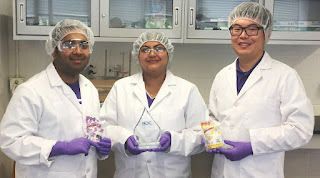 Now this is the type of innovation that assures me the future will be bright for dairy. Pictured here, left to right, are three Kansas State University graduates students: Karthik Sajith Babu, Priyamvada Thorakkattu and Yuda Ou. They won first place in the National Dairy Council’s annual New Product Competition with their product: Quick-Quark. The concept is a drinkable dairy snack based on the German-style quark cheese. It is made with whole milk, cream, milk protein concentrate and sweetened condensed milk. The mixture is fermented with live cultures to produce a mildly tart quark loaded with dairy protein, calcium and vitamin D. Using real fruit, the students developed two flavors: pina colada and acai blueberry. The latter has a distinct Kansas State University purple. Quick-Quark comes in a resealable eco-friendly pouch with a 30-day refrigerated shelf life. 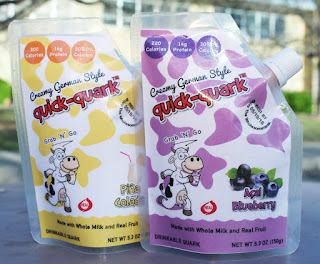 “Quick-Quark’s texture is very smooth and creamy,” says Ou. “It has a rich mouthfeel comparable to a full-fat yogurt. Our product has 14 grams of protein in a 150-gram serving, which is almost double the amount of popular Greek yogurt drinks and more than double the number of popular yogurts targeted toward children.”

Jayendra Amamcharla, associate professor of animal sciences and industry and team co-adviser, says, “The students wanted to develop a product that was not too familiar to consumers but had an appeal that will give it more visibility. I think Quick-Quark will be the next Greek yogurt. In 2007, Greek yogurt wasn’t popular in the United States, but now it’s approximately 40% of the total yogurt sales.”

Congrats and best of luck bringing the concept to market. All I ask is they flag that it’s dairy protein.