Yogurt in the U.S. in 2018. Three Concepts for Innovation Inspiration.

Spring is in the air. How about cleaning up and paring down your mainstay SKUs. The refrigerated yogurt case does not need a blended low-fat cherry yogurt sold under seven different brands. That’s what I counted in a store the other day.

According to The Yogurt Market and Yogurt Innovation, 3rd Edition, from Packaged Facts, estimated total retail dollar sales of the U.S. yogurt market were $8.8 billion in 2017. Sales increased at a compound annual growth rate of 2% between 2012 and 2017. Volume sales were basically flat in the period. Greek yogurt was the primary driver of upward sales growth over most of the past 10 years.

“The novelty and popularity of this product resulted in Greek yogurt soaring from 1% of the market in 2007 to about half of all sales currently,” says David Sprinkle, publisher for Packaged Facts. “Over the last couple of years, however, growth of Greek yogurt slowed as the segment matured. The overall market has suffered since the underlying declines for traditional yogurt haven’t been offset as they previously were by the significant growth in the Greek segment.”


This report identifies a number of opportunities for growing the category. I am going to build on two of them and present you with three concepts for innovation inspiration.

The first opportunity is dairy alternatives. I discussed this last week. You can read more HERE.

“The U.S. yogurt market enjoyed a revival when Greek yogurt hit the shelves. But with Greek yogurt becoming mainstream, the market is ripe for a new disruptor,” says Sprinkle. “Dairy-free products, especially beyond soy, may be the longer-term solution to revive what has become a relatively flat market.”

The challenge with many of these alternatives in their nutritional inferiority, namely, they lack the powerful protein one gets in cows milk yogurt. So why not combine the two? Adding whey proteins to a cultured coconut base prevents a vegan claim, but it’s still vegetarian, and likely still appealing to that growing segment of the population described as Flexitarian or Lessitarian. It’s the allure of plant protein fueled by the power of whey.

I see this product as more of a drinkable, quite possibly with a smoothie descriptor. Merchandising in the produce department beverage sector would be ideal, but if not there, the value-added milk department makes more sense than that very confusing and congested yogurt case. 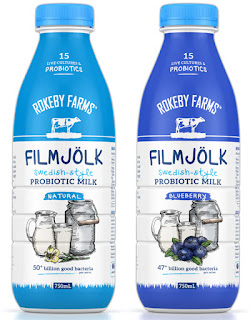 That brings me to the second opportunity—international influence--identified in the report. I will break this down into two innovation inspirations.

“There’s a new wave of international influences: skyrs by Icelandic Provisions and Siggi’s, now under Lactalis,” says Sprinkle. “There’s Australian versions such as Danone’s Wallaby Organic and French-accented versions such as General Mills’ indulgence-oriented Oui, in distinctive glass pots, and Liberté, with premium, on-trend flavors such as French Lavender. Innovation in flavor, texture and portability remains key to the market.”

Here’s an international influence that has gone largely ignored in the U.S. It’s pourable yogurt. This is not to be confused with drinkable yogurt, which is meant to be drunk. Pourable yogurt, as its name suggests, is meant to be poured on…to cereal, fruit, salad, etc. Quarts of kefir are the closest thing, and many consumers do use kefir in this manner.


Hopefully more consumers will explore how you can cook with kefir once The Kefir Cookbook, by Julie Smolyansky, CEO of Lifeway Foods, rolls out March 6. This first-of-its-kind cookbook features more than 100 globally inspired recipes using this popular probiotic and nutritious superfood.

Knowing Julie and her energy and commitment, I am confident this book will receive a lot of publicity. This is turn will encourage consumers to get more creative in the kitchen with kefir and other cultured dairy products. The time is right for pourable yogurt.

One might argue that all a consumer needs to do is scoop a few spoons from a multi-serve tub of yogurt. It’s just not the same. And, for many, there’s the syneresis issue that compounds after every scoop.

Pourable yogurt is meant to be shaken and poured. It should flow easily. It can be enhanced with vitamins, minerals, probiotics, prebiotics and protein for extra nutrition. But even more importantly, the product can be merchandised in the valued-added milk case. That’s where you find cultured buttermilk.

Now here’s that international influence. It’s called Filmjölk, or simply fil. This is a traditional fermented milk product from Sweden, and a common dairy product within the Nordic countries. It tends to have a mild and slightly acidic taste and is designed to be poured.

Here’s the second spin to the international innovation opportunity. David Sprinkle says that innovation in flavor, texture and portability remains key to the market.

That’s what you get with Alove from Morinaga Nutritional Foods Inc., the U.S. arm of Japanese dairy giant Morinaga, which has been successfully selling aloe yogurt in Japan for years. The brand debuted at Expo West 2017 and has not stopped growing. Alove is a kosher-certified yogurt snack that contains aloe, which is made via Morinaga’s proprietary process of removing fresh aloe from aloe plant leaves, the best and tastiest parts. This then gets mixed into creamy yogurt. The product is made in the U.S. using locally sourced California milk. The product does not contain high-fructose corn syrup, artificial flavors or gluten. It made its original debut in Blueberry, Original Aloe and Strawberry flavors and just last month Peach, Kiwi and Vanilla joined the lineup. The brand also has big news for Expo West 2018, which is less than two weeks away. But it’s embargoed, so you will need be patient for the details.

Alove cups are described as a thinner yogurt compared to conventional and Greek. The product gets a protein boost from whey protein isolate. The aloe contributes a unique texture to the product and is associated with internal healing, cleansing and repair. Some studies show an association with boosting immunity and heart health.

“Yogurt fans have eagerly expressed enthusiasm for international styles of yogurt, such as Greek and Icelandic, over the past few years. We strongly believe that aloe vera yogurt is poised to be the next category craze,” says Hiroyuki Imanishi, president and CEO of Morinaga Nutritional Foods. “The in-depth research we conducted before launching in the U.S. indicated consumers have great interest in our Japanese-style aloe vera yogurt, which is a silkier, smoother style of yogurt mixed with succulent cubes of aloe vera.”

In conclusion, Packaged Facts analysists have high hopes for the yogurt category. So do I!
The report projects that retail dollar sales of the yogurt market will reach $9.8 billion in 2022. Yogurt drinks will continue to grow in popularity, with sales increasing to drive overall market gains. Declines in the spoonable segment will abate, and sales will stabilize as major marketers respond to opportunities in growth niches, particularly in plant-based alternatives. For more information on the report, link HERE.