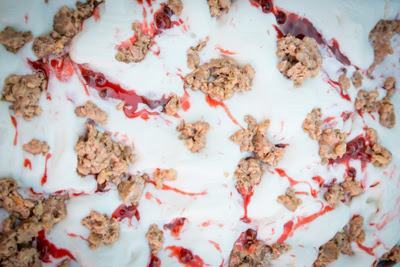 The ice cream and related frozen dairy desserts sector is experiencing a revitalization thanks to innovations in single-serve packaging and better-for-you formulations. The retail market has been relatively flat for the past two decades. That’s changing. Year-to-date (July 8, 2017) retail sales from IRI show ice cream sales were up 4.8% compared to the same period in 2016. Frozen novelties were up 1.5%.

Low-sugar, high-protein ice cream is a driver of this growth.

Enhancing ice cream or frozen dairy desserts with milk proteins, while at the same time decreasing added sugars, is an excellent approach to promoting ice cream as a healthful dessert, a snack or even a refuel food. Such better-for-you ice cream is not for everyone, but it’s definitely alluring to the growing health- and wellness- seeking consumer. This is why some of the larger players have taken note and are entering the category, which really just started gaining traction a few years ago when a number of entrepreneurs recognized this as an opportunity.

After all, Nielsen data shows that retail ice cream sales reached $6.6 billion in 2016, up 3.4% from 2015. Conventional products are not the driver of this growth. It’s the better-for-you segment. Sales of products that fit within the FDA’s definition of “healthy” grew 85% in 2016. As competition continues to grow in the better-for-you ice cream category, brands are looking for ways to differentiate their offerings. Protein is proving to be one of those ways. 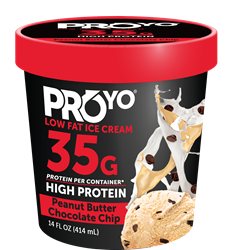 This week at Expo East in Baltimore, a number of those original players in the low-sugar, high-protein segment introduced new flavors to their product line. A few other companies made their debut.

One such player is ProYo, which launched two new indulgent flavors: Peanut Butter Chocolate Chip and Salted Caramel Crunch. At the trade show, the company also unveiled new packaging for its full line of nine High Protein Low Fat Ice Creams that more clearly touts the unrivaled amount of protein found in each container: 35 grams. ProYo High Protein Low Fat Ice Creams are now available in nearly 4,500 stores across the U.S., and the company continues to support its fast expansion with robust marketing and sampling programs.

The two newest flavors were developed in response to consumer and retailer requests for indulgent flavors and increased inclusions. Like all existing flavors of ProYo, the two new flavors provide 2 grams of fat, 10 grams of protein and 120 calories per serving. A 14-ounce container has a suggested retail price of $4.99 to 5.49. 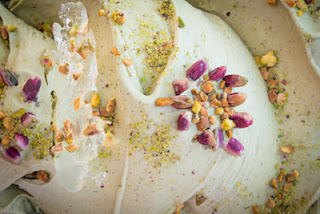 Need Innovative Flavor Ideas?
The “World’s Best Gelato,” was crowned on Sept. 10, 2017, in Rimini, Italy, at the Grand Finale of the Gelato World Tour organized by Carpigiani Gelato University and Sigep Italian Exhibition Group. The winning flavor—Pistachio—is the fusion of three different Sicilian pistachios, two from Bronte and one from Agrigento. It was created by the artisan Alessandro Crispini from Gelateria Crispini in Spoleto (Perugia), Italy. The flavor innovation includes refined Cervia salt to enhance the taste by giving the flavor an extraordinary sapidity.

“I am really excited and I didn’t expect to win,” says the winning artisan. “Pistachio may be considered a trivial flavor, but through an in-depth study of the raw materials I created something only apparently simple but in fact very complex. The three varieties of pistachio are roasted for 24 hours, then seared with sugar and Madagascar vanilla berries. I’m honored the flavor was so much appreciated.” 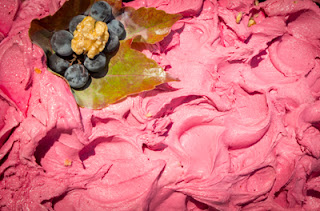 Guido and Luca De Rocco, father and son of Italian origin, residing in Germany, won the second place with their flavor “Tribute to Venice,” an Uva Fragola grape sorbet with caramelized nuts. 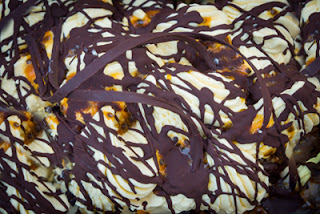 There were 36 flavors competing, presented by just as many teams for a total of 58 gelato artisans from 19 countries.

Here are the flavors, the country they are from and their description. Hopefully they inspire you for some future innovations.

AUSTRALIA – “Gorgonzola & Pear Variegate with Figs and Walnut” by Michael, Brian and Teresa O’Donnell from 48 Flavors in Adelaide, is a balance of classic Italian flavors: Gorgonzola dolce made from pasteurized cow’s milk aged for three months mixed with pear and finished with walnuts and organic figs. 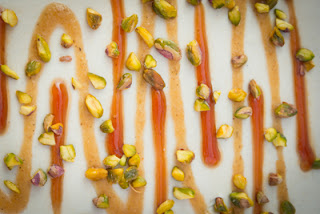 AUSTRIA – “Queen of Summer” by Katarina Rankovic, Manuela Strabler and Linda Peterlunger from Eismanufaktur Kolibrì in Wolfurt, is a light blackberry gelato made with fresh yogurt and lime juice. It has a light hint of organic lime zest and fresh organic mint.

BRAZIL – “Grandiflorum” by Filipe Carniel and Mary Cellura from MU Gelato Shop in Florianapolis, is fondant cupulate (chocolate made with the roasted beans of cupuaçu) combined with another sorbet of Capuaçu’s pulp. 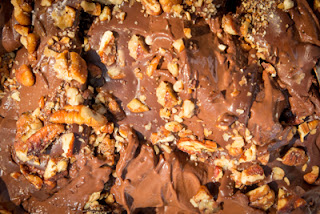 CHINA – “Chinese Tea Gelato” by He Quingxia and Xu Dianmond from Ci Gusta! in Shenzhen, is a combination of Jasmine and Liupao tea flavored gelatos.

CHINA – “Love of Rose” by Guo Hongwu from Ami Gelato in Zhangzhou, is a rose, sea salt and cheese gelato.

COLOMBIA – “Amor-acuyà” by Daniela Lince Ledesma from Amor-acuyà in Medellín, is an  exotic gelato that combines three different sensations: passion fruit with its sour and sweet taste, which binds perfectly with the cream, a homemade passion fruit variegate to enhance aroma, and a 65% Colombian chocolate.

COLOMBIA – “Mediterráneo” by Lorenzo and Marcello Luciano from Arte Dolce in Medellín, is a gelato full of the Mediterranean flavors of orange, lemon, extra virgin olive oil, pistachios and almonds.

GERMANY – “Tribute to Venice” by Guido and Luca De Rocco from Eiscafé De Rocco in Schwabach is a sorbetto base made with Uva-Fragola, or strawberry grape, from the countryside near Venice, and caramei, which is candied walnuts made following a traditional Zoldani art.

GERMANY – “Golden Almonds” by Ezio Piccin and Fabio Cividino from Caffè & Gelato in Berlin, is almond gelato flavored with orange peel with a dulce de leche cream made with a hint of Himalayan salt that is mixed throughout along with caramelized peanuts and Dacquoise meringue pieces. 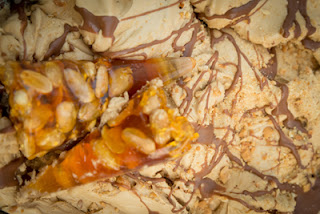 GERMANY – “Kiepenkerl” by Aurora Perenzin and Manuel Rütter from Eiscafè Arcobaleno in Stadtlohn, is a Viennese almond gelato with a fine note of cinnamon and vanilla, marbled with a raspberry cream and topped with crunchy caramelized and chocolate-covered sunflower seeds.

GREECE – “Salted Caramel Peanuts” by Dimitris Charalampous from Palladion in Rhodes, is sweet milk gelato with the finest Greek peanuts and soft salted caramel with a variegate of smashed peanuts and milk chocolate.

HUNGARY – “My Chocolate” by Renáta Somogyi from Bringatanya Fagyizó in Gyenesdiás, is a sweet and sour gelato made of 70% saothomé dark chocolate, which originates from a specific region in Africa, and South American passion fruit. It is variegated with crispy crépe flakes and homemade chocolate sauce.

ITALY – “Pistachio” by Alessandro Crispini from Gelateria Crispini in Spoleto (PG), is the fusion of three different Sicilian pistachios, two from Bronte and one from Agrigento, topped with refined Cervia salt. 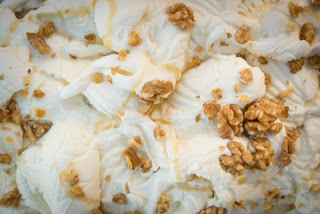 ITALY – “Pistachio” by Bruno Di Maria from Ristorante Madison in Realmonte (AG), is an organic pistachio gelato with a hint of salt. 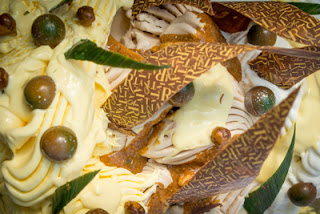 ITALY – “The Soul of Alto Adige” by Elisabeth and Alexander Stolz from Osteria contadina Hubenbauer in Varna (BZ), is a sorbet using ingredients produced by the Stolz family with a base of Tyrolean organic apples and flavored with crispy Schüttelbrot bread and Speck salumi.

JAPAN – “Natsumatsuri (Summer Festival)” by Akira Hattori from le Verdure in Yokohama, is a combination of strawberry, rose, mascarpone and pistachio gelato.

JAPAN – “Delizia al limone” by Yoshifumi Arita from Arita in Nagasaki, is a flavor inspired by the traditional Italian dessert of mini sponge cake filled and topped with a smooth lemon custard. 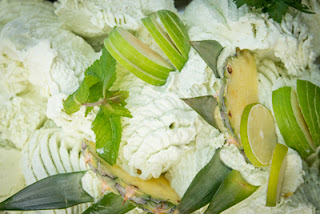 JAPAN – “Pineapple, Celery & Apple Sorbet” by Taizo Shibano from Malga Gelato in Nonoichi, is a sherbet that combines pineapple, apple and celery with basil and mint leaves, lemon and orange juice.

LEBANON – “Rose Loukoum” by Nathalie Massaad and Walid Boustany from Caprices Du Palais in Keserwen, is made of rose water, rose syrup and rose loukoum.

MALAYSIA – “Vanilla of the East” by Keewin and Seow Huan Ong from Cielo Dolci in Kuala Lumpur, is  Pandan gelato accentuated with Tahitian vanilla beans, topped with hazelnut crumbs caramelized in coconut caramel and finished with a drizzle of Melaka Sugar.

THE NETHERLANDS – “Honey-Yogurt Ice with Raspberry and Walnuts” by Erik and Hermien Kuiper from De Ijskuip in Denekamp, is yogurt gelato made with milk from Jersey cows combined with a flavor of spring honey and variegated with locally grown raspberries and walnut pieces covered in a homemade honey/sugar marinade. 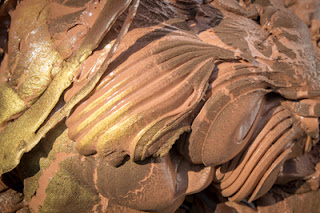 SLOVENIA – “Dark Smoke” by Ardit Ejupi from Sladoledarna Pingo in Šentilj, is dark chocolate gelato made with chocolate that has been smoked with cherry wood and flavored with bourbon whiskey. 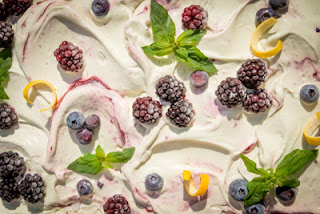 USA – “Bacche di Marsala” by Kelly Chu and Doran Matthew Cook from Cirsea in Charleston, South Carolina, is a honey and marsala wine gelato accented with a blend of lemon and goat cheese, infused with swirls of berry jam and cookie. 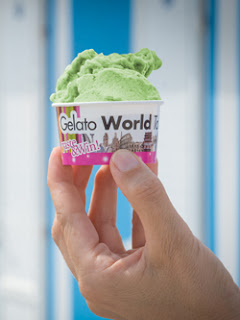 Need Ice Cream Innovating Assistance?
The Frozen Dessert Center, housed within the University of Wisconsin-Madison Department of Food Science, will hold its first Frozen Dessert Center Conference October 23 to 24 on the UW-Madison campus. Speakers, including myself, will address the scientific, manufacturing and technical aspects involved in the production of ice cream and other frozen desserts. This includes packaging, dairy and non-dairy ingredients, food safety and other trends.

The event’s keynote speaker is Doug Goff, a professor of food science at the University of Guelph. Goff’s talk will cover trends in ice cream ingredients and manufacturing, and the future of frozen desserts.