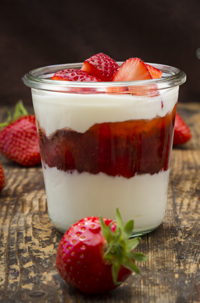 There’s a growing trend to use glass pots, clear plastic tubs and parfait cups to showcase the clean, simple naturalness of refrigerated yogurt. Glass pots, in particular, are gaining traction in the U.S.

General Mills now offers Oui by Yoplait. This new thick, creamy offering is made using a traditional French recipe and comes in French-made 5-ounce glass pots. It’s made with simple ingredients, such as whole milk, pure cane sugar and real pieces of fruit. It contains no artificial preservatives, no artificial flavors and no colors from artificial sources. Oui by Yoplait is an artisanal yogurt made by pouring ingredients into individual glass pots that set after eight hours, creating a unique texture. It is designed to be spoon cut slowly, not stirred, in order to preserve its satisfyingly thick, subtly sweet, fresh taste.


La Fermiere, a family-owned French yogurt company, has been a part of France’s yogurt scene since 1952. The company has started producing its yogurts in New York for U.S. distribution. The Le Fruit On The Bottom line is a two-layered whole milk yogurt that comes in four varieties. They are: Apple Kiwi, Mango Passion Fruit, Pineapple Coconut and Raspberry Blueberry.

There are a number of others entering the market. They will be featured in the near future as a Daily Dose of Dairy.

Before entering the clear container yogurt segment, it’s important to evaluate your fruit ingredient component to ensure it is visually appealing throughout shelflife. In layered yogurts, this includes maintaining vibrancy as well not bleeding into the white mass. Using artificial colors in the fruit prep typically helps; however, the trend in food colorings is to go natural. This is especially true in simple dairy foods with a healthful halo. The addition of artificial colors can be a deal breaker for some consumers. 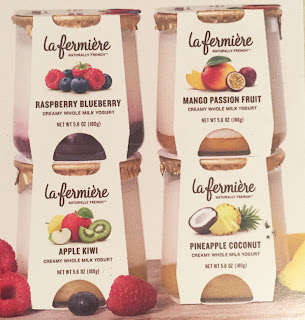 Recent research by Lycored compared the use of various naturally sourced colors in fruit-on-the-bottom yogurt. The accelerated shelflife tests evaluated color vibrancy and bleeding. The study compared appearance over one month, with samples containing 100 grams of full-fat Greek yogurt and 40 grams of fruit prep: apricot, lemon, peach or strawberry. Some fruit preps contained natural color, while others contained no color. The samples were all tested in two different stability environments. Both were held at 4 degrees C (39.2 degrees F) for 30 days, with one sample held under light of 2,200 Lux. (Typical retail refrigerators are about 750 Lux.)

In the strawberry samples, there was severe migration from the carmine-based colorant, compared to the samples colored with tomato-sourced lycopene. This was the case even in the samples containing pectin. There was also significant fade and distortion in the sample containing fruit prep with no added color.

Similar stability was observed in the beta-carotene-colored fruit preps used in the apricot and peach samples. As expected, fade intensified under light conditions. 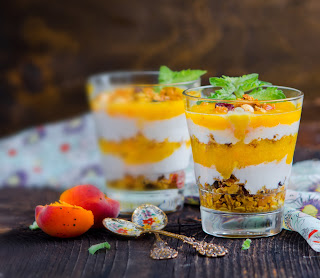 The company also assessed the stability of natural colors under the stronger and longer heat process of scaled industrial production. In each of the samples, the colors remained stable at 95 degrees C (203 degrees F) when held at that temperature for more than 30 minutes.

Beta-carotene can be tailored to achieve multiple fruit shades for lemon, pineapple, apricot, peach and mango. Lycopene delivers red shades for authentic strawberry and raspberry fruits that maintain their vivid hue and do not fade to purple when blended into yogurt. Both are process stable and stable to the ultraviolet light of retail refrigerators.

“Manufacturers who make the switch from artificial to natural colors reap the rewards,” says Christiane Lippert, head of marketing-food, Lycored. “When 506 health-conscious consumers were asked ‘Would you be willing to pay more for a product with natural flavorings and colors?’ almost nine in 10 said they would. On average they said they would pay up to 47% more.”