This is the third and final review of innovations from Anuga, the world’s largest food exhibition held every two years in Cologne, Germany. Anuga is where you find tomorrow’s hottest new products. To watch a brief video on what Anuga is all about, link HERE.

It’s always very inspiring to see the wide range of cheese offerings at global food shows. After all, most cheeses, or at least cheeses with the “natural” designation, are made with only four ingredients: pasteurized milk, cheese cultures, enzymes and salt. Yet, there are more than 1,400 natural cheese varieties cataloged in the World Cheese Exchange Database.

Here are more than a dozen innovations that caught my eye.

The best of the best is what you get with Taste 15, an accolade bestowed upon the best new products debuting at Anuga. This year, more than 830 companies applied to have their over 2,000 ideas included in the competition. In total, the jury selected 61 products and concepts that convinced in terms of idea, innovative power and creative implementation. There were many winners in the dairy hall, specifically in the cheese category.

One such winner was Switzerland’s Züger Frischkäse AG, which processes fresh, high-quality milk from the Eastern region to produce an array of fresh cheese products, including mascarpone, mozzarella, quark, ricotta and more. Around 200 employees work at the Oberbüren site, refining the milk from more than 380 regional farms. The company received accolades for its new Bio Mozzarella Herzen, organic heart-shaped pieces of mozzarella suitable as an appetizer, especially on “loving” holidays such as Mother’s Day and Valentine’s Day.

Also from Switzerland, Lustenberger & Dürst SA received Taste 15 accolades for this cheese seasoned with needles from the Swiss pine, a species from high elevations in the Alps. The sophisticated, essential oils from the needles provide a surprisingly fresh, tangy and woody taste.

The SalzburgMilch Cheese Collection includes three individually wrapped premium Bavarian cheeses packaged in an attractive presentation box suitable as a hostess gift. The Austrian cheesemaker labels the product as being lactose free and made from 100% genetically unmodified milk. 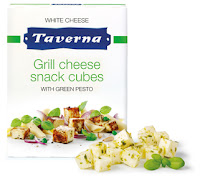 Danish cheesemaker Nordex received a Taste 15 award for its pesto-infused grilling cheese. Taverna Grill Cheese Snack Cubes with Green Pesto are designed to be grilled with a touch of oil in a pan until the surface browns. This gives the cheese a slight caramelized note. The sweetness of the caramelized surface provides a delicious contrast to the mildly salty cheese and the fresh green pesto, according to the company.

Germany’s Jermi Kasewerk won an award for its Kasetaler, which is described as no-melt cheese medallions. They are prepared in a pan or on the grill and can be served as an appetizer, atop a salad or as a main dish.

Such no-melt cheeses intended for grilling were very prominent at Anuga. These real-dairy cheese products function as meat alternatives for the growing number of consumers—known as flexitarians--who avoid meat on a regular basis. 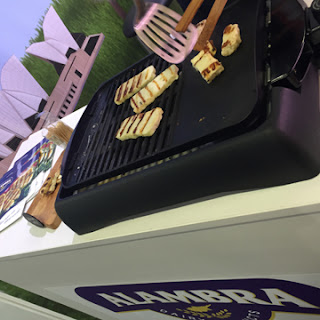 The term flexitarian comes from a combination of the words “flexible” and “vegetarian.” Following a flexitarian diet simply means eating more plant-based meals and less meat. This is often done for nutritional reasons, such as trying to reduce consumption of saturated fat and cholesterol. Other times it is to assist with improving animal welfare and reducing carbon footprint.

Such no-melt cheeses are high in protein and can be seasoned, prepared and served in a manner similar to a burger, chop or steak. That’s what the chefs from Petrou Bros. Dairy Products of Greece were showing attendees when they were grilling up Halloumi cheese that came in varieties including “with basil” and “with chilli.” 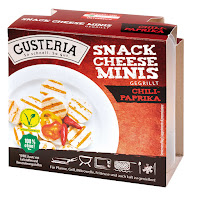 Austria’s Concept Fresh continues to grow its no-melt cheese sold under the Gusteria brand. The most recent introduction is a snacking size that comes in two packs of four medallions. The cheese comes with grill marks, so that it can be easily microwaved and served. There are three flavors: Chili-Paprika, Classic and Herbs. 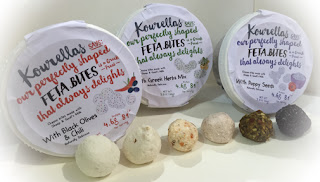 Greece’s Kourellas S.A. has new retail packs of Feta Bites. These bite-sized balls of sheep and goat’s milk feta cheese are loaded with flavorful goodies, including With Black Olives & Chili, With Greek Herbs and With Poppy Seeds. The “Greek treats” come in 5.3-ounce containers, the same size and shape of many Greek yogurts.

“The story of Feta Bites begins with our love for feta and the inspiration to use it differently,” said Ifigeneia Barlagianni, quality assurance-quality control manager. “Our R&D department developed a new line of feta snacks in several different versions. Feta Bites can be eaten as a snack, or appetizer, over salads or, why not, even as a dessert.” 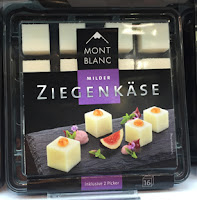 Germany’s Jermi Kasewerk introduced an upscale line of snacking cheese cubes. Packed 16 to a 110-gram tray, these cheese cubes are ready for serving. The four varieties are: Belgian-style, Farmers, Goat and Gouda. 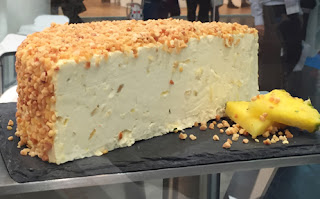 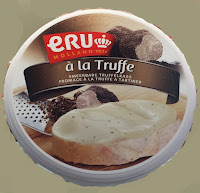 Koninklijke ERU, the trend-setting producer of quality processed cheese products in the Netherlands since 1824, has a passion for cheese and has an extensive portfolio of fine cheese products to prove it. One of its finest additions this year is a la Truffle, a conveniently packaged spread suitable for sandwiches, crackers or even crudité.

Germany’s Emmi Fondu has been repackaged into a more modern looking pack with cooking tips and serving suggestions. The microwaveable fondue cheese comes in three varieties: Family (without wine), Gorgonzola and Original. 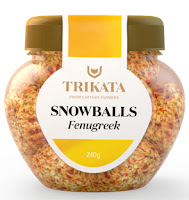 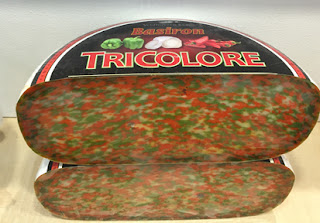 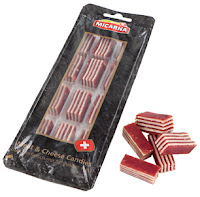 Mark your calendar and plan early for the next Anuga, which will take place October 7 to 11, 2017, in Cologne, Germany. For more information, link HERE.