The Evolution of Yogurt: Improving product composition to lower calories, which is what most consumers want 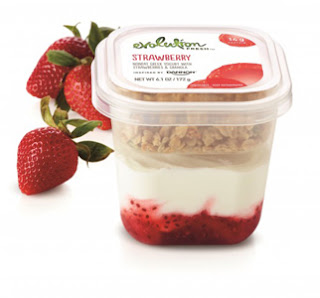 Last week’s blog on smoothie bowls, which can be read HERE, got a lot of folks talking. I was bombarded with questions about the concept and how to best approach it. I don’t have the answers, but what I can do is show you some like products scheduled to enter the marketplace this month.

I can also provide insight on how to best label and market such products. Because in between attending the International Dairy-Deli-Bakery Association (IDDBA) conference in Atlanta on Sunday, and FMI Connect and United Fresh in Chicago on Tuesday, I was able to interview Hank Cardello, lead author of the recently published report “How Supermarkets Are Shaping Up and Growing Their Lower-Calorie Products” that has been cited by numerous media outlets this week.

Excerpts from the report are located after a sneak peak at a couple of new products rolling out this month. Here’s what Cardello had to say about yogurt.

“From years of research we know consumers view foods such as yogurt as healthful,” he says. “When a marketer calls out on the front panel that an already-perceived healthful product has additional healthful attributes, such as lower in calories, no added sugar or enriched with fiber, the consumer response is positive. They don’t fight it.

“But when you attempt to make an indulgent food more healthful, it is best to take the stealth approach,” says Cardello. “Companies are constantly monitoring ingredient costs and making changes to improve their bottom line. They don’t brag about these changes to consumers. That’s the same approach many companies should take with improving nutritional profiles. Make the changes gradual over a number of years.” 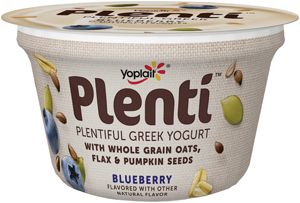 Here’s a sneak peak at a new product from General Mills that will be featured Monday as a Daily Dose of Dairy. (Be patient, you will get the scoop in a couple of days.) Basically Yoplait Plenti is a smoothie bowl. It is nonfat Greek yogurt blended with fruits, whole grains and seeds. The fruit and granola toppings usually served alongside a smoothie bowl are simply already mixed into the yogurt, creating a smoothie-like consistency. The descriptor “plentiful” says it all.

“Sometimes it is best to convey healthfulness through product descriptions or branding,” says Cardello. He cites the examples of lower-fat ice creams described as slow-churned rather than low fat.

“Skinny Cow also gets the message across,” he says.

I believe Plentiful does as well.

Cardello applauds General Mills for its 2005 commitment to improve the nutritional profile of its foods. To date, General Mills has improved the health profile of nearly three-quarters of its U.S. retail sales volume. To read more, link HERE.


“They are walking their talk,” he says. “I think they are very good marketers. I would expect they did their homework and checked in with their core consumer base before making any nutritional improvements in order to not hurt their franchise.”

This was his response to my query about General Mills making a 25% reduction in sugar in its flagship Yoplait Original yogurt line. The reformulated product line—all 25 varieties—just started rolling out a few weeks ago.

“Our consumers are our top priority, and when they voiced concerns over the amount of sugar in our products we were determined to find a solution,” says Susan Pitt, marketing manager for Yoplait. “We understand that making good nutritional choices isn’t always easy. With less sugar, fewer calories and more protein per cup, we have no doubt that our renovated line of Yoplait Original yogurts will make it easier than ever for our consumers to feel good about their daily yogurt choice.”

Determined to deliver on their brand promise, Yoplait is offering a taste guarantee for Yoplait Original with reduced sugar. Any unsatisfied customer can mail in their Yoplait Original receipt to receive a refund (up to 88 cents). 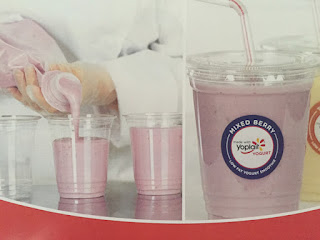 At IDDBA, General Mills’ convenience and foodservice division debuted Yoplait Smoothie Pro. The product resembles the company’s squeezable, recloseable bags of yogurt for making fresh fruit parfaits. Based on the company’s research with experienced and inexperienced smoothie makers, the bags are five-times faster than blender-made smoothies. Simply open and squeeze to portion with ease!

Made with cultured low-fat milk, Smoothie Pro comes in two varieties: Mixed Berry and Tropical. Each bag is 60-ounces and they come in cases of six. These ready-to-serve smoothies can easily be portioned into a bowl with spoon rather than a cup with straw. Think smoothie bowl self-serve bar. 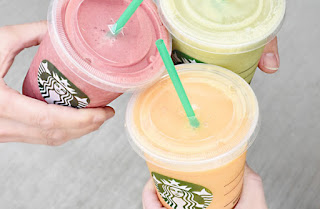 Dannon has been busy in the drawing room as well. This past spring, Evolution Fresh and Dannon teamed up to launch “Evolution Fresh Greek Yogurt Products, Inspired by Dannon.” The platform consists of three product concepts: smoothies, yogurts and yogurt parfaits.

Each product is made with simple ingredients that highlight the delicious taste of fruits and vegetables and a proprietary Greek nonfat yogurt. Dannon and Evolution Fresh worked together for two years to develop this proprietary Greek nonfat yogurt that is not only creamy, but is the perfect canvas for the high-quality fruit and vegetables used in these unique products, according to the companies. Further, all of these products are made without artificial flavors or sweeteners and no preservatives.

The smoothies are made with the Greek yogurt and cold-pressed 100% real fruit and vegetable juice that has been high-pressure processed for food safety. They come in three made-to-order varieties--Mango Carrot, Strawberry and Sweet Greens—and can be customized by adding fresh kale, protein powder or extra Greek yogurt for an extra boost of nutrients or protein. 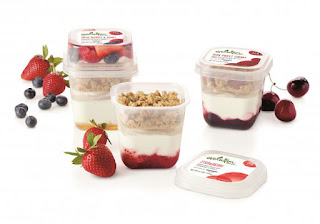 The parfaits are crafted by hand from proprietary, creamy, Greek nonfat yogurt, artisan granola and real fruit. They will be available year-round in Dark Sweet Cherry and Strawberry varieties, and seasonally in Fresh Berries and Honey options.

With these two product concepts now implemented, joining the Starbucks’ stores hot oatmeal line, I think smoothie bowls will be on the menu soon.

The fruit-on-the-bottom Greek yogurts are what’s happening on the retail front this month. Available in four flavors--Black Cherry, Blueberry, Pineapple Passion Fruit and Raspberry Blackberry—the yogurts comes in clear packaging that consumers can easily see the high-quality craftsmanship and simple ingredients that go into each spoonful. The cups are 5.3-ounces, which has become the standard in the Greek yogurt segment, but the clear packaging and the shape are unique to Evolution. Each container contains 120 calories and has a suggested retail price of $1.69.

Lower-Calorie Research
Cardello presented his research to the retail food industry at a morning educational session on Tuesday at FMI Connect. His research showed that lower-calorie foods and beverages drove the bulk of sales growth for supermarket chains between 2009 and 2013, making up 59% of growth, compared to just 41% for their higher-calorie counterparts. This is the first report to examine the business impact that sales of lower-calorie items have on supermarket chains.

Those trend lines did not hold, however, for foods and beverages that contribute the most calories to the diets of children and adolescents, items such as desserts, snacks, sugary drinks and pizzas. During the study period, higher-calorie versions of these products made up more than 70% of sales and grew more than 12%, whereas lower-calorie foods and drinks saw growth of roughly 5%. 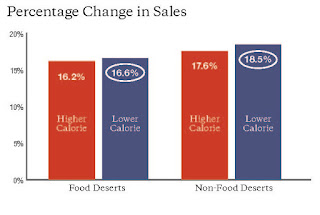 Source: Hudson Institute
The overall shift in supermarket sales to lower-calorie products is largely consistent with recent changes in the restaurant and food and beverage industries, the report found—except that sales of lower-calorie items grew at an even faster rate for the latter two sectors, indicating that supermarkets could be taking better advantage of the public’s shift in food preferences.

“Customers are looking for lower-calorie choices wherever they are,” he said Tuesday morning. “The good news is, supermarkets’ growth is being driven by these products, but compared to other sectors they’re still leaving money on the table. There is a tremendous opportunity to drive even more sales by focusing more on lower-calorie options.”

To produce the report published by the Hudson Institute and funded by the Robert Wood Johnson Foundation (RWJF), Cardello and his team analyzed Nielsen Scantrack data from 2009 and 2013 for 202 individual food and beverage categories for the three largest supermarket retailers in the U.S., including their 26 banner chains. The categories include a wide range of foods, such as cereal, pasta, fruits, vegetables, packaged meals, milk and snacks. The researchers used data on the average number of items on a store shelf, and, most important, the total sales in dollars for each category. Together the three retail ownership groups account for 45% of the U.S. supermarket industry.

Researchers then classified each product as either lower-calorie or higher-calorie based on criteria developed previously in conjunction with the Nutrition Coordinating Center at the University of Minnesota. For instance, cereals with 150 calories per serving or less, beverages with 50 calories or less, and skim and 1% milk would all qualify as lower-calorie items. 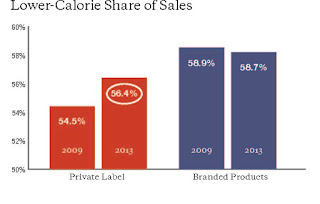 “Supermarket chains have every reason to continue to increase their sales of lower-calorie items, because it’s good for their bottom line,” says Victoria Brown, senior program officer at RWJF. “They also need to make more progress to promote and sell foods and beverages popular with kids that are not just lower in calories, but truly healthy too.”

Cardello says that chains can grow their sales of lower-calorie items by giving them more prominent shelf placement, highlighting them on in-store ads and displays, and selling more of them in check-out lanes.