The dairy industry in Asia Pacific is expected to outpace mature markets like the U.S. and Western Europe in the very near future. This is the result of Asian consumers’ increasing awareness of the health benefits associated with dairy foods, with yogurt and fermented dairy products leading the way.
Research shows that consumption of dairy products has rapidly increased in the Asia Pacific region, making it the fastest-growing region for dairy product consumption during the past thirty years, according to the organizers of the Dairy Asia Pacific Summit 2014, which will commence in Singapore on November 20.

This two-day summit will draw together distinguished experts as well as dairy industry leaders for a thorough analysis of product innovation, regulatory, industry integration, safety controls, supply chain management and traceability, as well as farm management and sustainability within the dairy industry in the Asia Pacific region. It will function as a useful opportunity for attendees to share their valuable experiences and opinions of the many unique challenges and opportunities within Asia Pacific’s dairy industry.
For more information, link HERE. Hope to see you there!

China is Developing a Taste for Dairy

China will be the largest dairy market in the world by 2018, despite dairy not being part of the traditional Chinese diet, according to a new report from Canadean entitled “Consumer Trends Analysis: Understanding Consumer Trends and Drivers of Behavior in China’s Dairy Food Market.”

This growth comes as western influence makes its impact and the aging Chinese population grows more concerned about bone health. Although dairy is not part of the traditional diet in China, more Chinese are exposed to fast-food outlets, travel and experience of global cuisines and media coverage of western tastes. This leads to more Chinese consuming dairy, such as milk and cereals for breakfast or cheese in pizza and on burgers. As lactose intolerance is widespread in Asia, Canadean predicts that lactose-free and low-lactose products will be particularly popular in China. Yogurt and fermented dairy foods are inherently no to low sources of lactose. 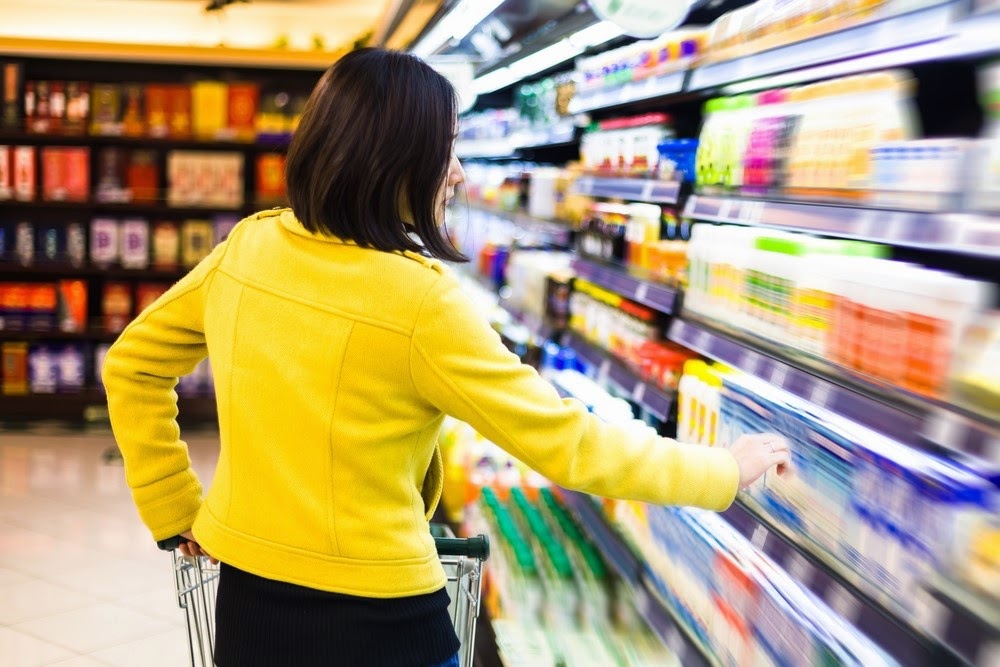 Despite China being on its way to becoming the largest dairy food market in terms of volume, the average Chinese consumer enjoys only 209 dairy products per year. In contrast, the average UK consumer eats and drinks 1,040 dairy items, which indicates room for high growth in China. Canadean sees a big potential in consumers aged 55 and older. Those consumers are increasingly mindful of their health and are starting to turn to dairy with higher protein or calcium content to prevent gut and bone diseases. However, the health benefits of dairy are still widely unknown in China. Veronika Zhupanova, analyst at Canadean, says, “Knowledge of osteoporosis is limited, which means brands need to educate consumers about dairy’s role in aiding bone health via packaging, advertising and awareness campaigns.”

The Chinese dairy market is developing rapidly. Imported products from certain areas are benefiting from a higher level of trust. Chinese consumers view them as enforcing more stringent product safety regulations than domestic producers, but manufacturers should not only bet on their reliable image. Zhupanova adds, “In the near future, foreign manufacturers need to adjust their strategies to target the unique features of the Chinese market. For instance, a significant proportion of Chinese households still does not have a refrigerator, which is driving the importance of ultra-pasteurized dairy products.”  For more information on the report, link HERE. 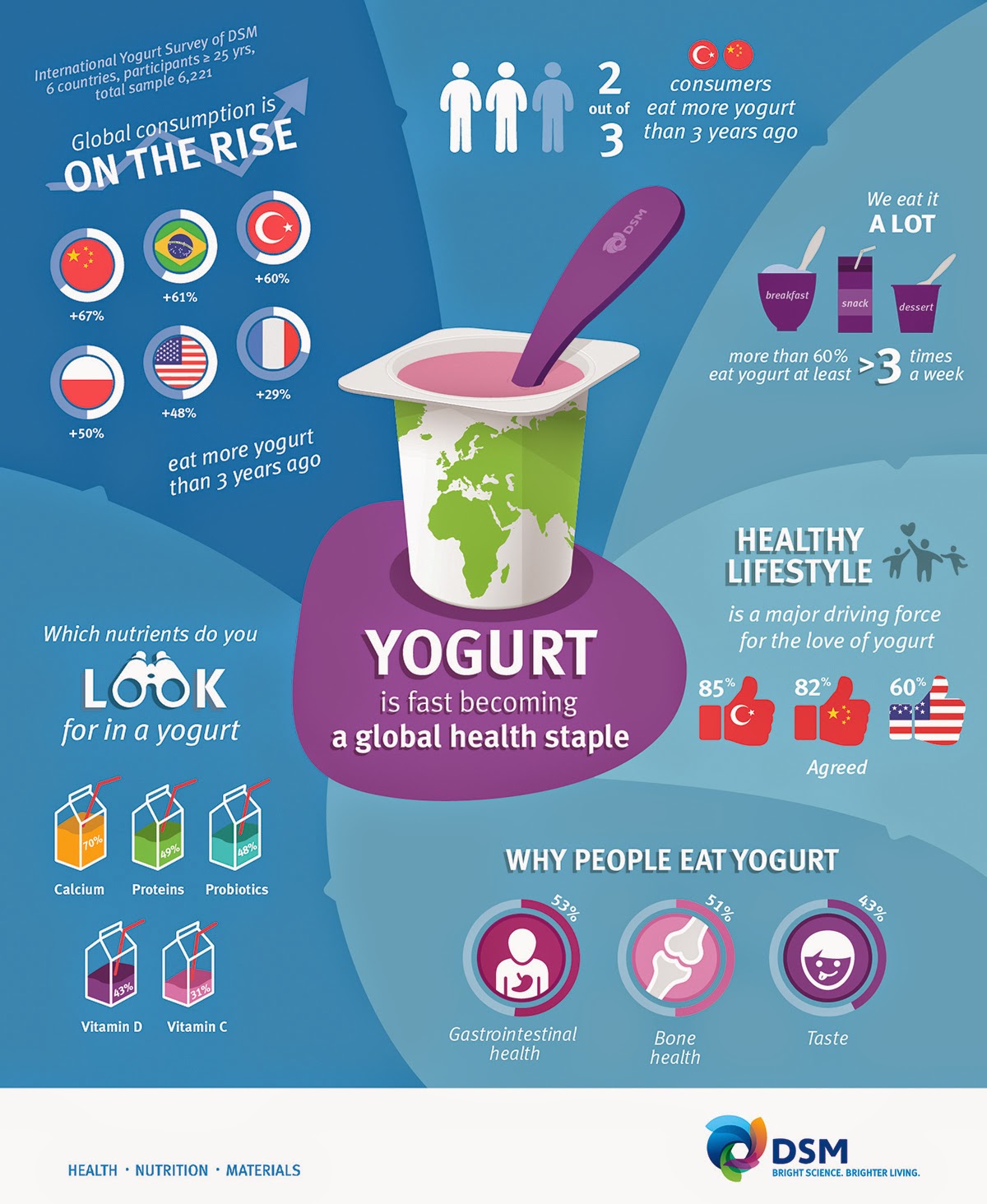 Appeal of Yogurt on the Rise

Global research by DSM Food Specialties identifies a growing demand for yogurt as health-conscious consumers make it a regular habit. A recent survey reveals that during the past three years, more than half of respondents increased their yogurt consumption. The increased appetite is led by markets such as China, Brazil and Turkey where 67%, 61% and 60%, respectively, of the respondents indicated that they are eating more yogurt than three years ago. Two out of three consumers say they are doing so because they are more conscious of their health.


The survey, which was completed by more than 6,200 consumers in U.S., China, Brazil, Turkey, France and Poland, showed that around the world an increased focus on a healthy lifestyle is the major driving force behind the rise in yogurt sales. Especially in Turkey (86%) and China (82%), respondents listed health as the main reason for their increased consumption, above other options such as “the availability of more varieties,” “yogurt is better than before” and “dietary reasons.”

Health concerns, such as bone health and gastrointestinal health, were clearly identified as key reasons for eating yogurt. Women in particular (55%) are more conscious of bone health compared to men (47%).

The survey also identified regional differences. While Chinese consumers indicate that gastrointestinal health is the key influencer (76%), Turkish and French respondents cited bone health as their main concern (72% and 59%).

Consumers are well aware of the vitamins and minerals that naturally occur in yogurt and link it clearly to the health benefits they demand. Besides calcium, consumers are also looking for proteins and probiotics. In particular, Chinese consumers are looking for probiotics in yogurt (83%), as health claims have started to impact perceptions on gut health in the region. For dairy producers, the natural health aspects of yogurt carry some distinct advantages, however, consumers are also willing to pay extra for enriched yogurt, especially in China.

To get an idea of recent innovative food products rolling out in the Chinese marketplace, take a look at the list of winners from the SIAL China Innovation 2014 competition, which took place during SIAL China this past May. There were 63 selected innovative products from 48 companies from 20 different countries. There were numerous dairy foods. To view the list, link HERE.


One company stands out on this list. It is China-based Inner Mongolia Yili Industrial Group Co., Ltd. (Yili), which also happened to be the only Asian dairy enterprise to rank among the world’s top-10 in 2014, according to Rabobank, the Dutch multinational banking and financial services company. For more on Rabobank’s 2014 Global Dairy Top 20 Report issued on July 9, link HERE. 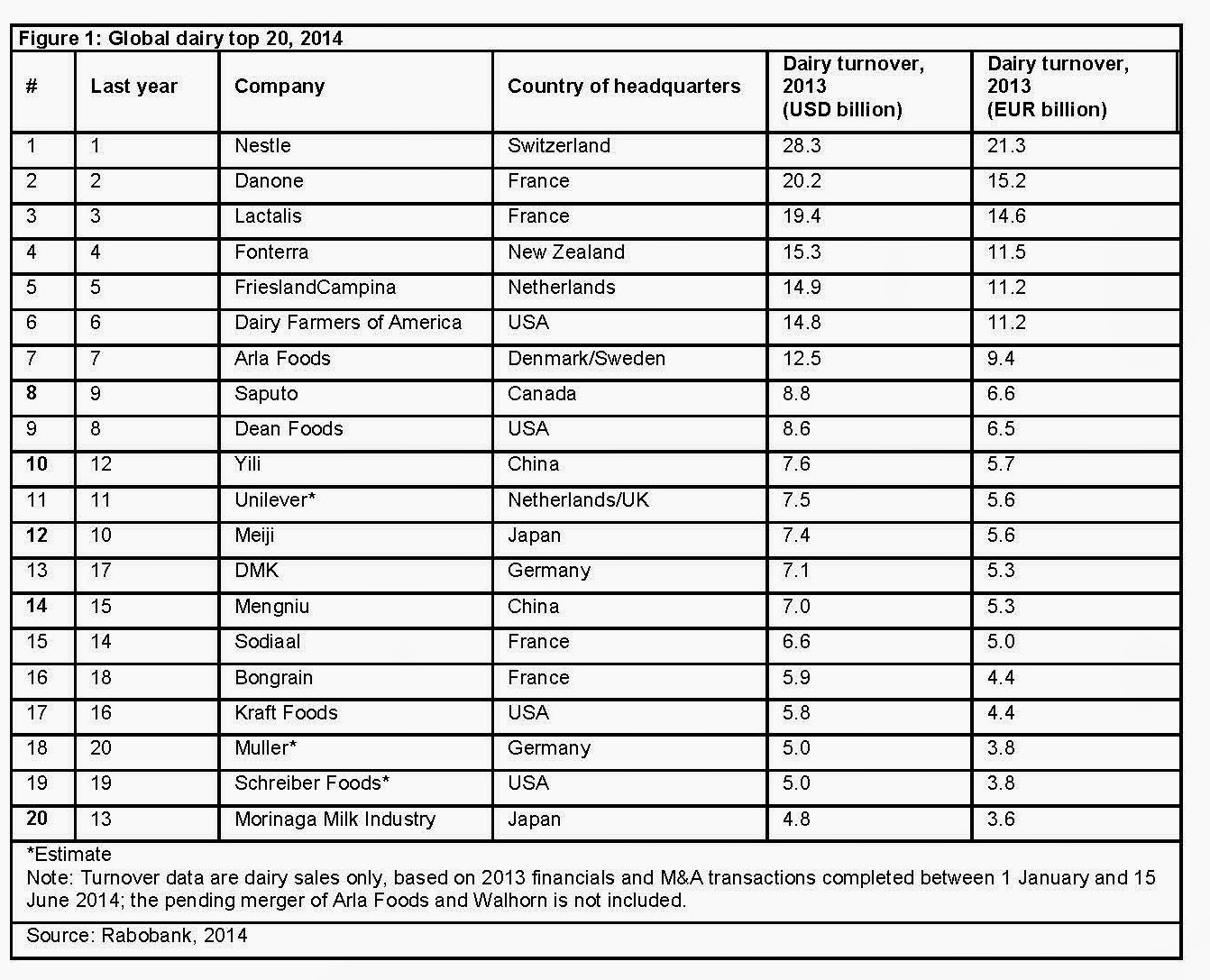 This is the best achievement by a Chinese dairy producer in the report’s history and is the highest ranking attained by an Asian dairy manufacturer. Rabobank analyst Tim Hunt regards Yili’s entry into the top 10 as a landmark event showcasing the fast development of Asian dairy. This achievement can be partly ascribed to the huge market demand by China’s economic development; robust expectations for growth across the dairy sector allows producers in emerging markets to accumulate enough capital, develop the motivation to participate, become an influencer and even improve the industrial chain globally, giving them the final say in resource allocation. Another influential factor is the public’s rediscovery of the power of Chinese businesses as international consumers re-assess made-in-China products and services, and move them into their list of “want to have” items. Gradually these products and services are evolving into an indispensable part of day-to-day life.

The jump in ranking has another implication for Yili; the producer’s role as a sponsor of the Olympic Games 10 years ago caused Yili to radically raise the bar in terms of its own expectations for both quality and brand awareness, as well as to undertake a full-scale restructuring of the enterprise. From milk source management to upgrading of products, from quality control systems to innovative research and development, from a globalized presence to localized market penetration, from the high level of demand in the world’s fastest growing market to the aura of the Olympic Games, all of these factors and events have combined into an overwhelming level of strength, allowing Yili to win in the competitive international dairy market as well as provide an admission ticket to its standing among the dairy industry’s global top 10. Finally, Yili entered the ranks of the world’s top-10 dairy manufacturers for the first time this year, two years ahead of Yili’s own expectations.

Yili started to create an overseas footprint last year by investing in a milk powder project in New Zealand and by entering into a strategic cooperation with the U.S.’s largest milk cooperative, Dairy Farmers of America, and the Italian dairy produce firm, Sterilgarda Alimenti S.p.A. At the beginning of this year, Yili expanded its research and development efforts abroad by establishing a European R&D Center with Wageningen University, a top-level university in the Netherlands. The two parties have also entered into a strategic agreement to set up the first Sino-Dutch food safety guarantee system. Industry insiders deem these overseas moves as having comprehensively improved Yili’s control over the industrial chain and its own brand influence globally, further helping it become a dairy giant worldwide. These moves all factor into how Yili successfully jumped into the world’s top 10. 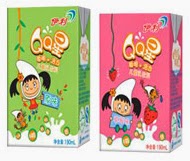 Some recent innovations from Yili include Yili Mei Yi Tian, a fruit juice-flavored cultured milk drink enriched with probiotic cultures and dietary fiber. It is intended for digestion and intestinal health.