Fiber: That Other Line Under Total Carbohydrates in the Nutrition Facts

Last week in this space I wrote about FDA’s proposed changes to the Nutrition Facts label. I specifically addressed the addition of an “Added sugars” line under the “Sugars” declaration and how the dairy industry should look at this as an opportunity to make labels more appealing. If you missed the blog, you can read it HERE.

In FDA’s very lengthy report, which can be accessed HERE, fiber is discussed in great detail; however most articles—consumer and business—did not pick up on this important item of discussion.

I learned of it in a press release from the Center for Science in the Public Interest (CSPI), a.k.a., the food police. The press release can be accessed HERE.

In the release, CSPI gave FDA high marks for proposing that the “fiber” listed on Nutrition Facts labels exclude purified, isolated fiber food ingredients, also often referred to as novel fibers. CSPI believes that such added fibers are not as beneficial as intact, unprocessed fiber that one gets through the consumption of whole foods.

Now, this may or may not be true, as there is little documented research in this area, according to my friend Roger Clemens, DrPH., former president of the Institute of Food Technologists, a member of the 2010 Dietary Guidelines Advisory Committee and current adjunct professor with Pharmacology & Pharmaceutical Sciences at the University of Southern California School of Pharmacy in Los Angeles and associated director of the International Center for Regulatory Science at the same location. He is quick to point out that for those who have forgotten, fiber was identified as one of four nutrients of concern in the American diet in the Dietary Guidelines for Americans, 2010, report.

Here is an excerpt from the fiber discussion in Chapter 4 of the Dietary Guidelines for Americans, 2010:

Dietary fiber that occurs naturally in foods may help reduce the risk of cardiovascular disease, obesity and type 2 diabetes. Children and adults should consume foods naturally high in dietary fiber in order to increase nutrient density, promote healthy lipid profiles and glucose tolerance, and ensure normal gastrointestinal function. Fiber is sometimes added to foods and it is unclear if added fiber provides the same health benefits as naturally occurring sources.

Here is an excerpt from an article that appeared in the August 2010 NIH News in Health newsletter from the National Institutes of Health, part of the U.S. Department of Health and Human Services:

The health benefits of isolated fibers are still unclear. Research suggests they may not have the same effects as the intact fibers found in whole foods. For instance, there’s little evidence that isolated fibers help lower blood cholesterol, and they have differing effects on regularity. On the plus side, some studies suggest that inulin, an isolated fiber from chicory root, might boost the growth of good bacteria in the colon.

The bottom line is that most of us need to fit more fiber into our day, no matter what its source. It is a disservice to Americans to exclude fiber food ingredients from being part of the fiber line on the Nutrition Facts. These ingredients will help Americans close in on the fiber gap of what’s recommended and what is consumed.

The public health implications of inadequate fiber intake prompted the formation of an October 2011 roundtable meeting of nutrition researchers, educators and communicators entitled “Filling America’s Fiber Gap: Probing Realistic Solutions.” The meeting was sponsored by Kellogg Company and a synopsis of the meeting appeared in print in the July 2012 issue of The Journal of Nutrition.

Prior to the roundtable, Kellogg published a report entitled “Closing America’s Fiber Gap with Options and Variety” in 2011. The report can be accessed HERE.

With low fiber intakes, consumers need a variety of options to help them bridge the fiber gap. In addition to encouraging consumption of fruits, vegetables, legumes and whole grains that are a good source of fiber, adding fiber to lower-fiber grain foods that people already like and eat is a practical solution to meet fiber recommendations without adding significant calories to the diet.

The company explains that functional or novel added fibers comprise isolated and synthesized (mostly through fermentation technology), non-digestible carbohydrates that have beneficial physiological effects in humans, and further explains that there is significant scientific evidence for the benefits of added fiber. In fact, most clinical studies of fiber’s physiological benefits have been conducted with added fiber, not with whole, fiber-containing foods.

While they often have complex technical names, added fibers are frequently derived from natural sources. Beta-glucan, for example, is typically derived from oats and barley while oligofructose and inulin are derived from foods such as chicory root and Jerusalem artichoke. Additionally, commonly used isolated fibers, like oat fibers, are also considered “added fibers” when they are removed from one food source and put into another.

According to the experts involved in the roundtable, which included Dr. Clemens, “All of us agreed that all fiber-containing foods should play a role in helping Americans meet their daily fiber needs. With evidence that fiber intake is closely linked to energy intake, there was recognition of the challenges of increasing fiber while attempting to reduce energy intake, as is the goal for many who are overweight. This prompted the need to focus solutions on immediate and realistic small-step changes that could be implemented within current eating patterns. Considering that nearly all Americans fall short of meeting their fiber needs, yet meet or exceed their daily recommendations for grain foods, our discussions centered on opportunities to improve the fiber content of grain-based food choices as a strategy with an immediate potential for increasing fiber intakes without exceeding energy goals.”

Further supporting the idea of boosting the fiber content of foods are results from a modeling exercise using data from the National Health and Nutrition Examination Survey (NHANES) 2003-2006 that measured the effect on calorie intake when fiber-containing foods Americans are currently eating were increased to meet fiber recommendations (maximum increase of five times current intake). Although fiber intake increased in all adults to 28.5 grams per day, the calorie intake increased by more than 1,000 calories per day. Alternatively, by adding fiber food ingredients to foods that are naturally low in fiber to make these foods have 2.5 grams or 5 grams of fiber per serving, men and women increased daily fiber intakes to 25 and 39 grams, respectively, without increasing calories. (The FASEB Journal, 2010; 24: Abstract 745.1)

Adding fiber to grain products is not a new concept, as many bread and cereal manufacturers have included oat fiber, beta-glucan and psyllium in their product formulations for many years. FDA even allows an on-pack health claim that highlights the role of foods containing beta-glucan and psyllium, whether naturally occurring or added, in reducing the risk of heart disease. What is a 21st century phenomena is the inclusion of novel fiber food ingredients such as inulin, soluble corn fiber and resistant maltodextrin.

These fiber ingredients have application in many dairy foods. Not only can they boost the fiber content of these foods, they can assist with the reduction of calories and fat. This is food science in action and such progress should be embraced for the wellbeing of Americans. 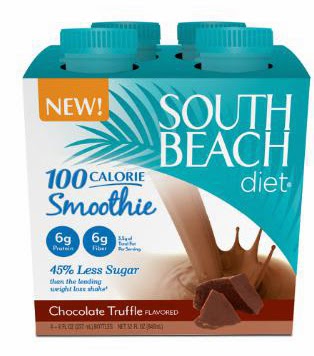 South Beach Diet 100 Calorie Chocolate Truffle Smoothie is packed with 6 grams of both protein and fiber, with the latter from the addition of soluble corn fiber.

The new Quaker Breakfast Shake contains 6 grams of fiber in every 11.1-fluid-ounce bottle. The fiber comes from a combination of whole oat flour, polydextrose and hydrocolloids.


In conclusion, Dr. Clemens shared these comments with me yesterday afternoon at Natural Products Expo West in Anaheim:

"Isolated novel fiber ingredients do differ in physical characteristics, chemical nature and physiological responses when fed to (infants) and consumed by (adult) humans. Part of the educational challenge is conveying those differences while embracing those differences.

This is one of the challenges with beta-glucans. Most people (at least consumers) think all beta-glucans are from grains and that they help reduce blood cholesterol. Yet, we know that beta-glucans from other sources, such as yeast and mushrooms, function differently because of their innate structural differences. These beta-glucans impact the immune system via activation of several complement receptors associated with specific types of white blood cells (macrophage, neutrophil) and do not have any effect on cholesterol.

Evidence suggests that chain-length (degree of polymerization) makes a difference with respect to gut microflora’s response to certain ingested fibers. Further, depending on one’s microflora (microbiome) profile, the anticipated response can also differ."

Bottom line is that fiber added to foods by a manufacturer represents a good start, an important start, to help bridge the fiber gap.
Posted by Donna Berry at 6:37 PM