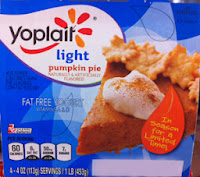 It’s been raining for two days and gloomy off and on for the past two weeks in Chicago. It’s a gruesome Halloween. I’m hoping all this nasty weather passes so there will be beautiful autumn days and nights when you arrive in The Windy City to attend The International Dairy Show at McCormick Place, from Sunday, November 3, to Wednesday, November 6. For more information, visit HERE.


Two things to remember about the show:
1) This Sunday, Daylight Savings Time ends. We fall back an hour. That extra hour means you have no excuse on being late to the show.
2) The Daily Dose of Dairy will be LIVE on the show floor at the iDairyShow Theater. Here’s the schedule:

Fortifying Dairy Products
Not only have the days been rainy and gloomy, they are noticeably shorter. So it’s not surprising that a number of news channels have started talking about the importance of vitamin D supplementation. This is because the body synthesizes vitamin D when skin is exposed to the sun. No sun translates to insufficient vitamin D for the body to most effectively function.

Interestingly, since the early 1930s, most dairy processors have been voluntarily adding vitamin D to fluid milk to prevent rickets, a bone-debilitating disease that was prevalent at the time and linked to a deficiency in this fat-soluble vitamin.

Why do most dairy processors stop at fortifying milk? Why not include this critical nutrient in cheese, yogurt and even ice cream? And why stop with vitamin D? There are a number of nutrients that consumers are lacking in sufficient quantities in their daily diet. Dairy products make excellent delivery vehicles.

IFIC’s 2013 Functional Foods Consumer Survey
In 2013, the International Food Information Council (IFIC) commissioned its eighth survey studying Americans’ awareness of and attitudes toward functional foods. This survey has been conducted every two to three years since 1998. It continues to provide consumer insights into consumers’ interests and perceptions about the roles of foods and beverages in promoting health and wellness. In contrast to previous surveys, which largely explored views on food and health benefit pairings, the latest round of research was designed to investigate consumer perceptions related to nutrient inadequacy, the variety of sources of functional components including naturally occurring and fortified, food processing, and behavioral determinants of functional food consumption.

This year’s study took place between July 9 and July 22, with data collected from 1,005 random U.S. adults who participate in a 20-minute web-based survey. Here are some highlights that will hopefully encourage your R&D department to pursue fortification of new dairy foods. 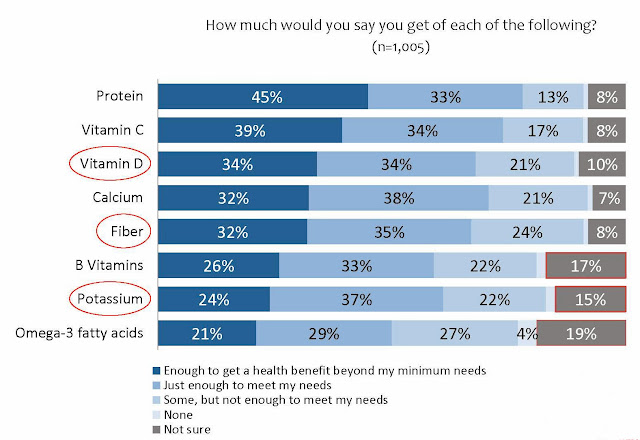 The survey revealed that despite consumers’ reported knowledge about nutrition, the majority (67%) believe they fall short of meeting “all or nearly all” of their nutrient needs. Further, the survey also shows significant disconnects between people’s beliefs about whether they are getting sufficient amounts of many specific nutrients and the reality of their diets, as judged by the Dietary Reference Intakes (DRIs) recommended by experts.

Opportunity to Fortify with Vitamin D, Potassium and Fiber

A comparison between the survey’s findings about perceptions of diet adequacy (by specific nutrient) and National Health and Nutrition Examination Survey (NHANES) data shows large discrepancies between how many believe their intakes are adequate versus the actual DRIs. For nutrients such as vitamin D (68% perception vs. 32% consumption), potassium (61% vs. less than 3%) and fiber (67% vs. 5%), the discrepancy between perception and reality is quite stark. These three nutrients—vitamin D, potassium and fiber—present a real fortification opportunity for dairy processors. 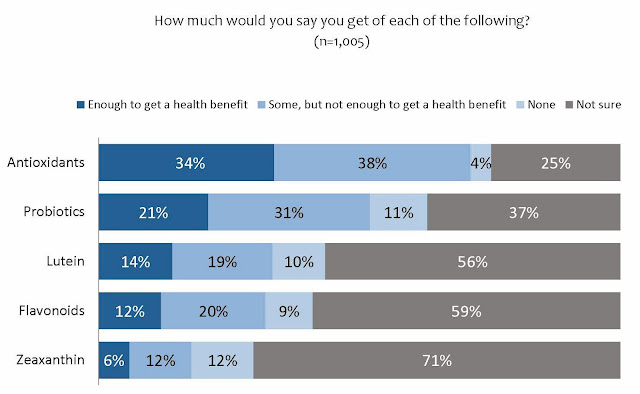 Opportunity to Fortify with Antioxidants and Probiotics…as well as Lutein, Flavonoids and Zeaxanthin

More than half of consumers say they are getting at least some antioxidants and probiotics but many say they are not consuming enough to get a health benefit. There are still gaps in knowledge and consumption of a variety of other functional components, such as lutein, flavonoids and zeaxanthin. One third, or less, of the population say they are not consuming enough of these components to meet their needs or to get a health benefit. Dairy products can function as a delivery vehicle for all these fortificants. 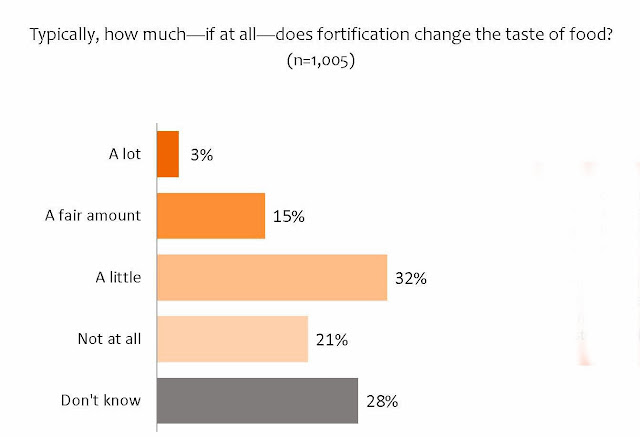 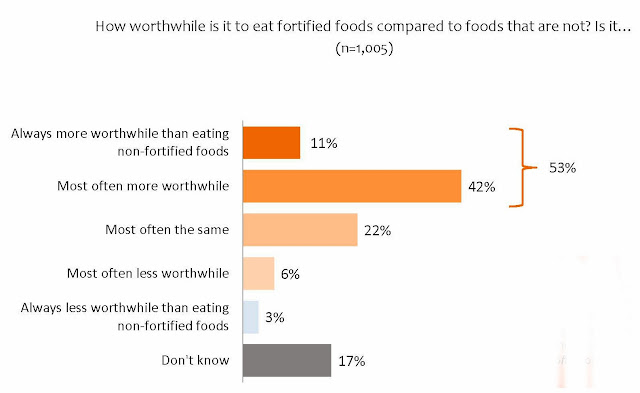 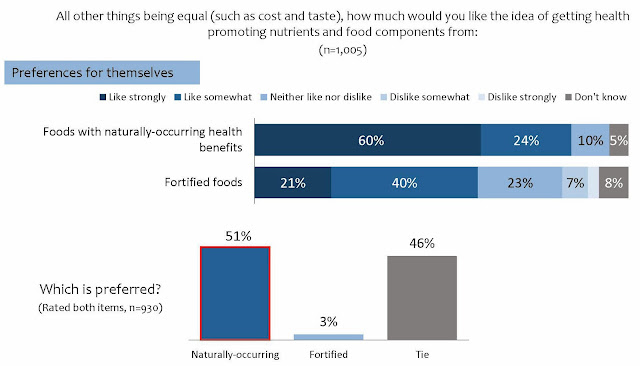 What is interesting is how different are their views of fortified foods for themselves, their children and their senior parents. For themselves, consumers like the idea of getting health-promoting nutrients and food components from foods with naturally occurring benefits more than in fortified foods, but nearly half don’t have a preference. 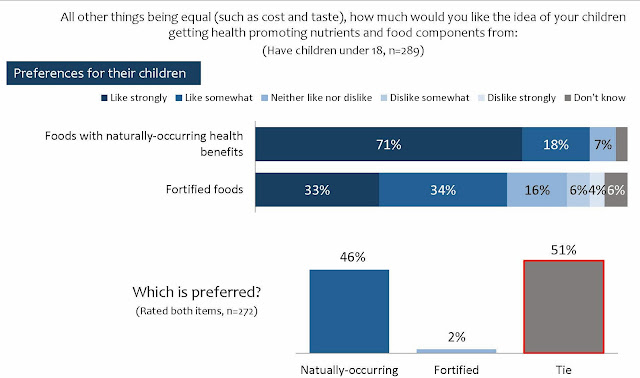 Interestingly, for their children, consumers tend to like the idea of each nutritional avenue more. 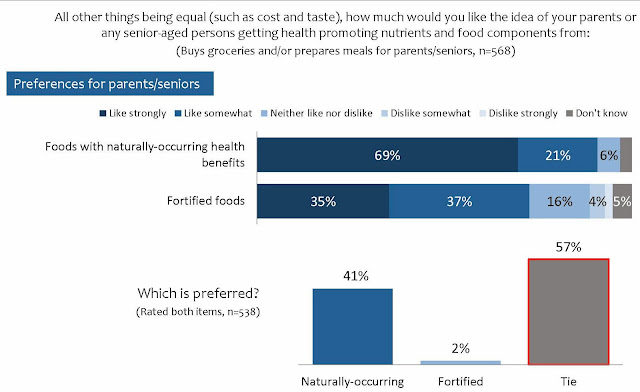 For their senior parents, consumers like the idea of both nutritional avenues and are even more likely to have a tie in ratings for the two. 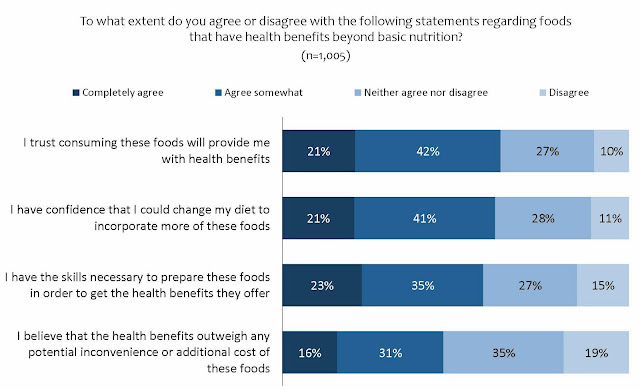 
Here’s the best part. Nearly two-thirds of consumers trust that functional foods will provide health benefits and have confidence that they could make the necessary changes to integrate these foods into their diet. 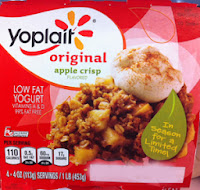 
General Mills is one of a handful of U.S. dairies that adds both vitamins A and D to its yogurts. 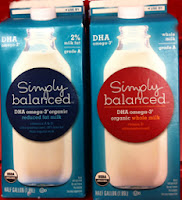 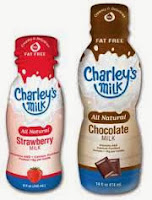 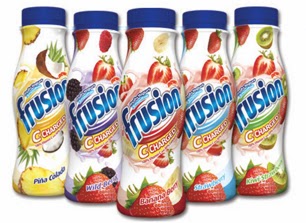 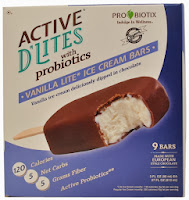 In addition to the 10 billion colony-forming-units of Bifidobacterium Lactis HN019 and Lactobacillus acidophilus NCFM in each bar of Casper’s Active D’Lites with Probiotics Lite Ice Cream, each bar also contains 5 grams of fiber. The fiber comes from the inclusion of digestive resistant maltodextrin, fructooligosaccharides and inulin. The fiber is used in both the ice cream and the chocolate coating. For more information, visit HERE.

ProYo is as much about the probiotics as it is the protein. The frozen yogurt tubes are also a source of fiber. The product’s development story is an interesting one. You can read it HERE. 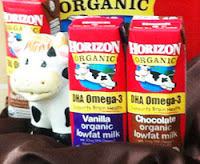 And now I sign off to get ready for the ghosts and goblins who will be ringing my doorbell very soon, expecting some candy. It should be no surprise that my youngest visitors will get a single-serve DHA-fortified aseptic Horizon chocolate milk. Read more HERE.


Older kids get candy…after all, I don’t want my housed egged!
Looking forward to meeting many subscribers at the Daily Dose of Dairy LIVE!