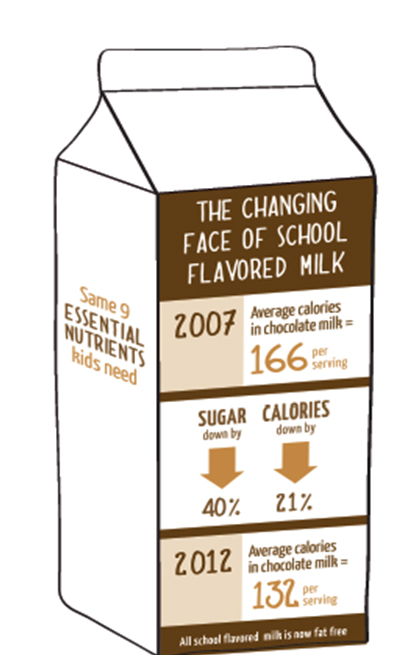 (Please read this entire blog. You will be entertained! Promise…on your milk carton’s expiration date!)

On the heels of participating in the 15th annual Dairy Council of California Functional Foods Task Force (DCC-FFTF), I would like to share comments made by fellow task force member Cary Frye, vice president of regulatory and scientific affairs at the International Dairy Foods Association (IDFA).

You can read more about the DCC-FFTF by clicking HERE.

According to Frye, U.S. dairy processors have done a very impressive job of responding to consumer and school demands for good-tasting, lower-fat, and less-sugar and calorie flavored milks. In fact, my 11-year-old son, who traveled with me to San Francisco for this meeting, as he was on spring break, proudly told the group how he is served TruMoo fat-free chocolate milk at his parochial school. (I swear this was at no prompting by mom!)

This school variety of TruMoo contains only 120 calories per serving and 6 grams of added sugar. To read more about TruMoo and other innovative new milk products, click HERE.
Prior to the Task Force meeting, my son and I stayed one night at a hotel in Fisherman’s Wharf. And…excitingly, TruMoo fat-free chocolate milk was offered on the breakfast buffet. I was very entertained by how he was reading the carton information. Immediately, he shared the riddle with me, and then proceeded to tell me this milk was made by a different farm than the one back in Chicago. But…he said, Berkeley Farms is a Dean Foods company, and so is the one at home. “The cows must be related,” said my youngest. (Note: Kids are into “too much information!”)
With his milk, he had French toast…with sugar-free syrup. We choose sugar-free products (those sweetened with non-nutritive sweeteners) to limit daily sugar intake, as diabetes does run in the family. Further, we also try to limit caloric intake from sugars to prevent unnecessary weight gain.
Imagine how overweight and/or diabetes-prone children would benefit from flavored milk that contains even fewer calories and less sugar than TruMoo or similar milks. 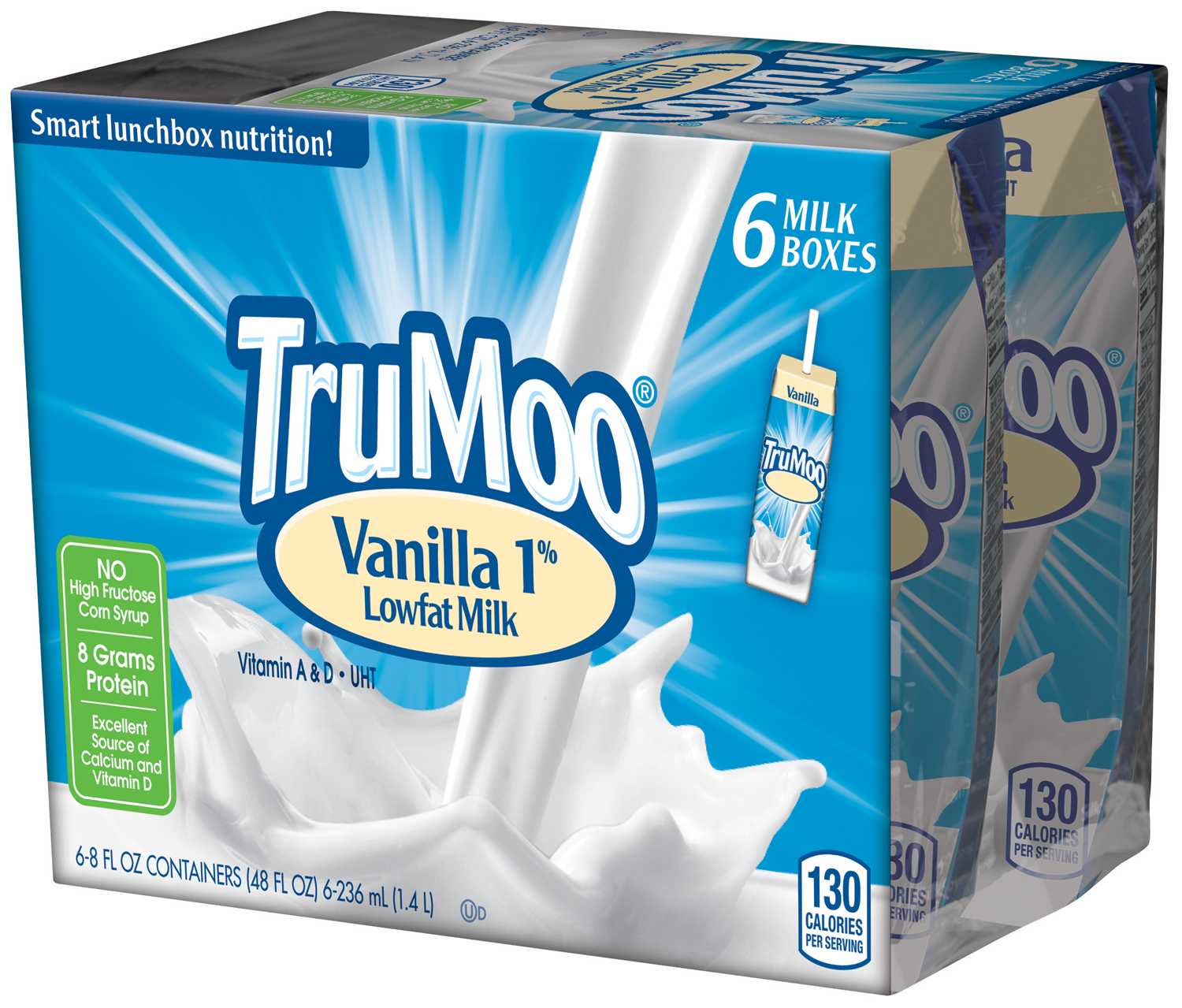 The petition
Nearly four years ago, IDFA and the National Milk Producers Federation filed a citizen’s petition with FDA requesting a modification of the standards for milk and other dairy products to allow the use of non-nutritive sweeteners. In February 2013, FDA finally published the petition in the Federal Register along with the agency’s request for public comment.
The petition was and continues to be a direct attempt to keep flavored milks in school cafeterias, as federal agencies and consumer groups continue to push for lower-calorie milk and foods on school menus to combat increases in childhood obesity.

The current standard requires processors to use special labeling, such as “reduced-calorie chocolate milk,” for milk made with non-nutritive sweeteners. This phrase, according to market research, doesn’t appeal to children and has contributed to the overall decline in milk consumption in schools, the petition states. (And we know kids read their milk carton!!! But I do think mine would be fine with this nomenclature.)
Allowing milk processors to use any “safe and suitable” sweetener in flavored milk and still label it “milk” would help to stem the drop in consumption, while promoting healthy eating habits that will last a lifetime, according to the petition.
“Milk flavored with non-nutritive sweetener promotes public health by offering children and adolescents a beverage they are more likely to consume than plain milk and that has all of the nutritional benefits of milk and less sugar than milk flavored with nutritive sweeteners,” the petition states.

The petition and supporting attachments are available HERE.
To post comments on FDA’s web site about the petition, link HERE.
FDA’s food labeling regulations require all food products that use non-nutritive (or non-caloric) sweeteners to clearly list them in the ingredients list on their packaging. This petition would not change that, and consumers would continue to see at a glance whether or not a product contains sweeteners of this sort.
Dr. Oz: Here’s the “REAL” story
Frye recently appeared on The Dr. Oz Show, a nationally syndicated daytime television program, to present the industry’s position and reassure consumers that all dairy products would continue to communicate ingredients clearly on the ingredients label. In her interview with Oz, the show’s host, Frye stressed that the petition would only affect sweetened dairy products and that sweeteners would not be added to white milk. She explained that all ingredients would still be listed on the label and that the petition is asking for flexibility to provide consumers with low-calorie or no-calorie options. 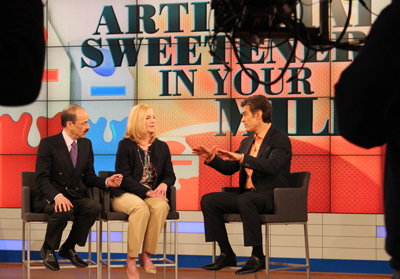 “We want to be able to compete with other beverages such as low-calorie sports drinks and diet sodas that have the exact same labeling that we’re asking for,” Frye said.
She was joined by Dr. Keith Ayoob, R.D., an associate clinical professor of pediatrics at the Albert Einstein College of Medicine in New York City. Ayoob pointed out that non-nutritive sweeteners are safe and that most Americans aren’t getting enough of the nutrients provided by milk and dairy products. He also reinforced that the petition would allow additional options for consumers.
Oz also interviewed two guests who opposed the petition: Dr. Russell Greenfield, clinical assistant professor of medicine at the University of North Carolina Chapel Hill School of Medicine, and Heather White, executive director of the Environmental Working Group.
To view the interviews—and I highly encourage watching the entire 30 minutes—watch these five parts. Frye’s interview
starts on Part 3. Part 1, Part 2, Part 3, Part 4, Part 5

Overall, Oz underscores several times throughout the show that he is a supporter of milk, its wholesomeness and its numerous health/nutrition benefits. His main concerns are transparency/lack of front-of-pack labeling on the industry’s behalf, added “chemicals” and the consumer’s right to know what’s in their products. The segment never questions the nutrition benefits of milk nor that it should be removed from the diet. In fact, it’s quite the opposite, reinforcing the wholesomeness throughout--but Oz is very dramatic about labeling, urging consumers to sign the petition to keep wholesome/nutritious food unadulterated.
What are your thoughts? Please leave a comment on this blog. But wait…
While in San Fran, my son and I toured Alcatraz. Did you know... 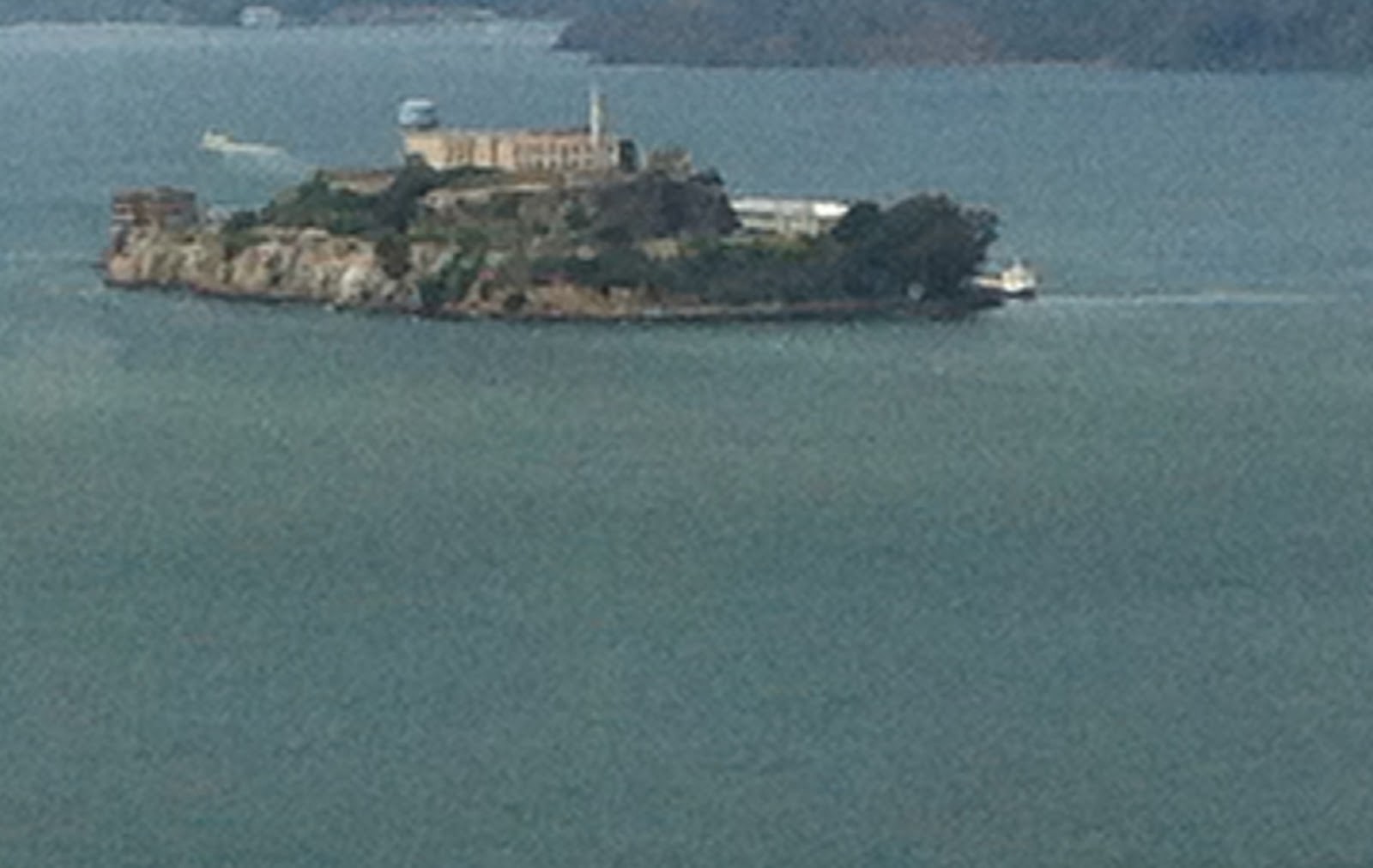 ...Al Capone, an inmate (#85, to be specific) at San Fran’s famous Alcatraz high-security prison, lobbied for milk-bottle dating to ensure the safety of Chicago’s (my  hometown) children.
That's right. Prior to being sent to "The Rock," Capone was a Chicago businessman who made a fortune in alcohol distribution during the brief period of Prohibition from 1920 to 1933. Although the Federal government viewed Capone as a gangster, to many people in The Windy City, he was a modern-day Robin Hood, as he was the first person to open a soup kitchen to feed the poor during the Depression.
It gets better. It was reported that one of Capone’s family members in Chicago became ill from drinking expired milk. At that time, there were no controls on milk production, neither expiration dates nor controls on adulteration, dilution or skimming of the cream. This drew Capone’s interest to the milk business.

Here’s where the scandal begins. With the end of Prohibition approaching, Capone saw a potentially high profit in milk distribution, as his fleet of “moonshine” trucks could easily be used to transport milk.
So, first, he acquired a milk processor: Meadowmoor Dairies. Then he made history in the U.S. dairy industry, but something very few know: Capone convinced the Chicago City Council to pass a law requiring a visible date stamped on milk containers.
Of course, he most likely had other motives. Many believe that Capone had already cornered the market on equipment to stamp expiration dates on bottles, and the passage of the legislation would help him take over the Chicago milk market.
Too much information. I know.
Oh, wait...Alcatraz inmates were served two milks at each meal. 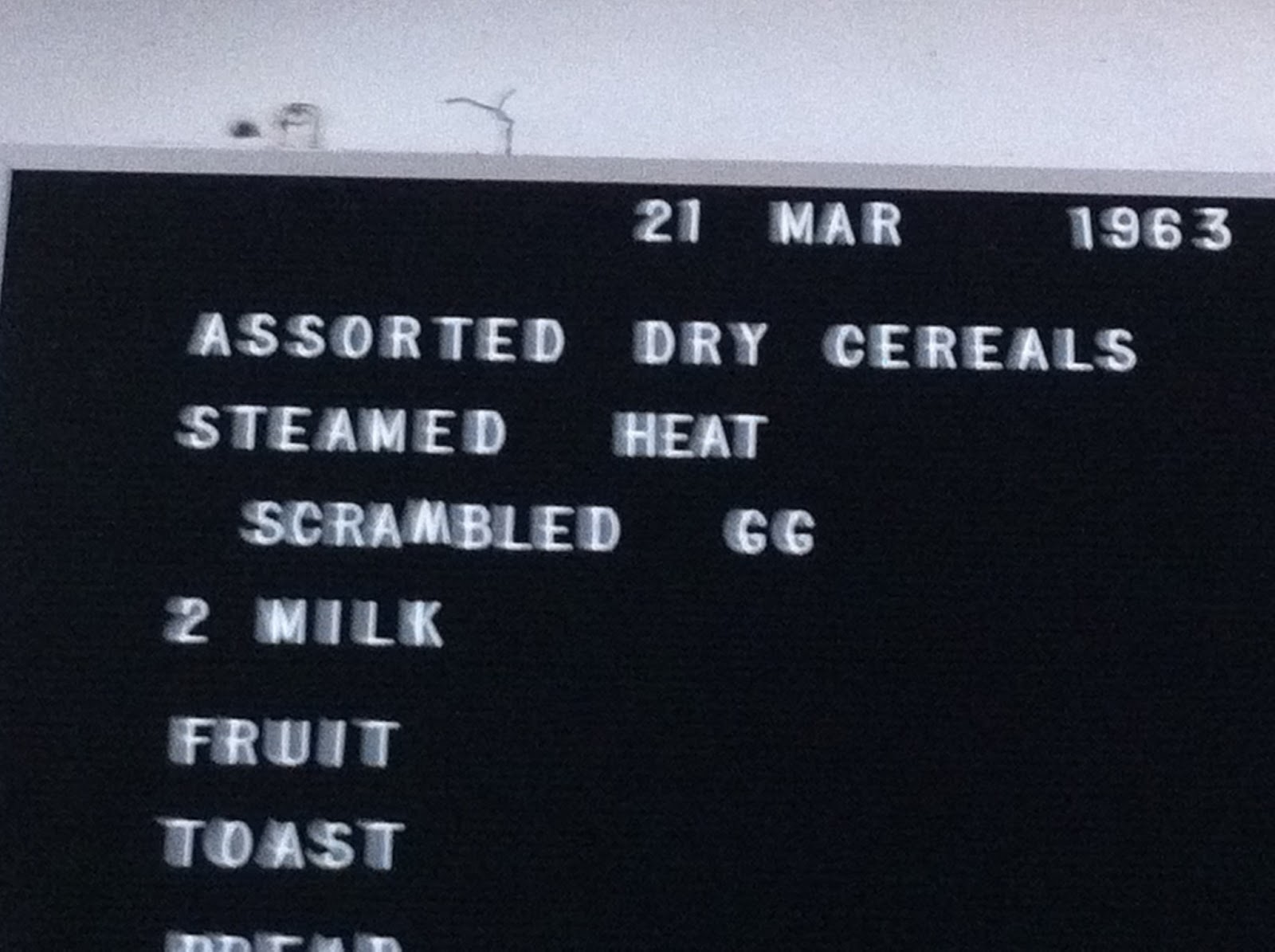